Tehran's state television denies reports of an assassination attempt, others claim it was a firecracker 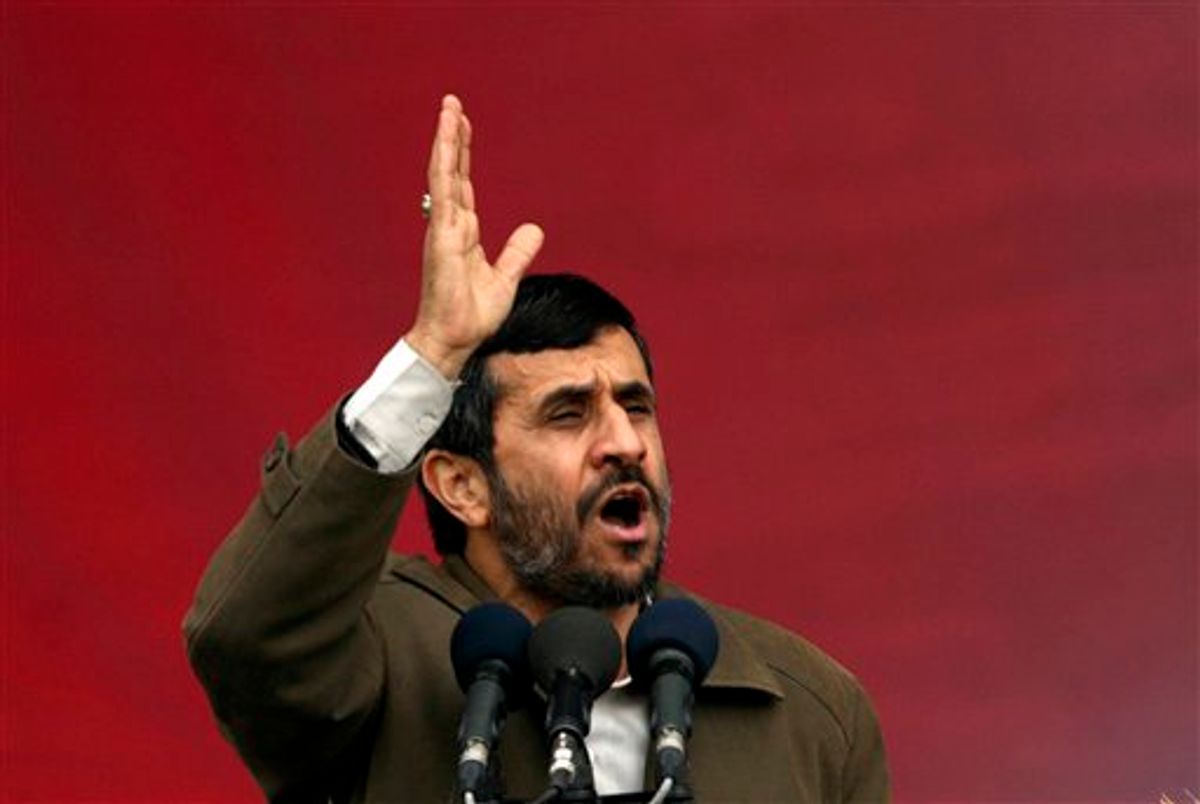 A conservative Iranian website said President Mahmoud Ahmadinejad escaped an assassination attempt after a handmade grenade exploded near his convoy on Wednesday, but Tehran state TV denied the report.

Other media reported an explosion in the area but gave conflicting accounts about the cause. Some said it was a firecracker.

The website, khabaronline.ir, said the grenade detonated near Ahmadinejad's convoy as he was on his way to address a crowd in the western Iranian town of Hamedan but did not harm him.

The president later gave his speech as planned, and it was broadcast live on state television. He made no mention of the attack in his remarks, focusing instead on the country's disputed nuclear program.

He struck a hard line against Western demands that Iran halt its nuclear activities. The U.S. and its allies accuse Iran of trying to develop atomic weapons, but Tehran insists its nuclear program is for peaceful purposes.

"It will be one of your big mistakes if you think you, resorting to lies and hue and cry, are able to achieve something and we will give you any concession," Ahmadinejad told the crowd at the Hamedan stadium.

One person was arrested in connection with the attack, the website report said, adding that Ahmadinejad's car was about 100 yards (meters) from the blast. It also said there was no information whether anyone was injured.

"The explosion caused a lot of smoke," the report said.

Ahmadinejad, whose popularity at home is waning amid a faltering economy and tightened U.N. and Western sanctions over Tehran's nuclear program, regularly tours the countryside to deliver speeches to grass-roots supporters in cities and town across Iran.

A U.S.-Iran relations specialist, Jim Walsh with the MIT program on security studies, said that "Iran has a strong interest in trying to minimize this event, given the domestic problems following last year's unrest over the presidential election."

Walsh stressed that assassinations have been a staple of Iranian politics in the past and that while there have been attempts on other Iranian officials, there's been no known such attack on Ahmadinejad.

Several media outlets differed in the details about what happened.

The semiofficial Fars news agency said a handmade grenade was thrown at the path where the president and his entourage had been but only after they had left the site. Fars said the explosion disturbed people at the site.

The government-owned Borna news agency said somebody threw a firecracker after the convoy had passed, while the semiofficial Mehr news agency called it a handmade percussion grenade.

A photo by the semiofficial Isna news agency showed smoke dozens of yards away from the convoy, which was surrounded by people. It did not elaborate on the source of the smoke.

Hamedan, 200 miles (340 kilometers) west of Tehran, is not known as a restive area, but it is close to Kurdish area of Iran that has witnessed occasional clashes between Kurdish rebels and security forces over the past years.

Ahmadinejad also said Monday during a speech that Israel had sent agents to assassinate him, but he gave no details.

The accusation came a day after another conservative Iranian website, Mashreghnews.ir, reported that security forces had detained a terrorist group in Tehran that planned to assassinate officials. It linked the group to Kurdish separatists.

In May, Ahmadinejad was jeered by a crowd demanding jobs when he was speaking during a similar visit to the southern Iranian town of Khorramshahr.

In 2005, bandits reportedly killed a bodyguard of Ahmadinejad during his visit to restive Sistan-Baluchistan province in southeastern Iran. However, the president had left the province before the attack occurred.