An inheritance of cake

When my godfather finally died for real, he left me a ribbon and the recipe that won it. It was just like him 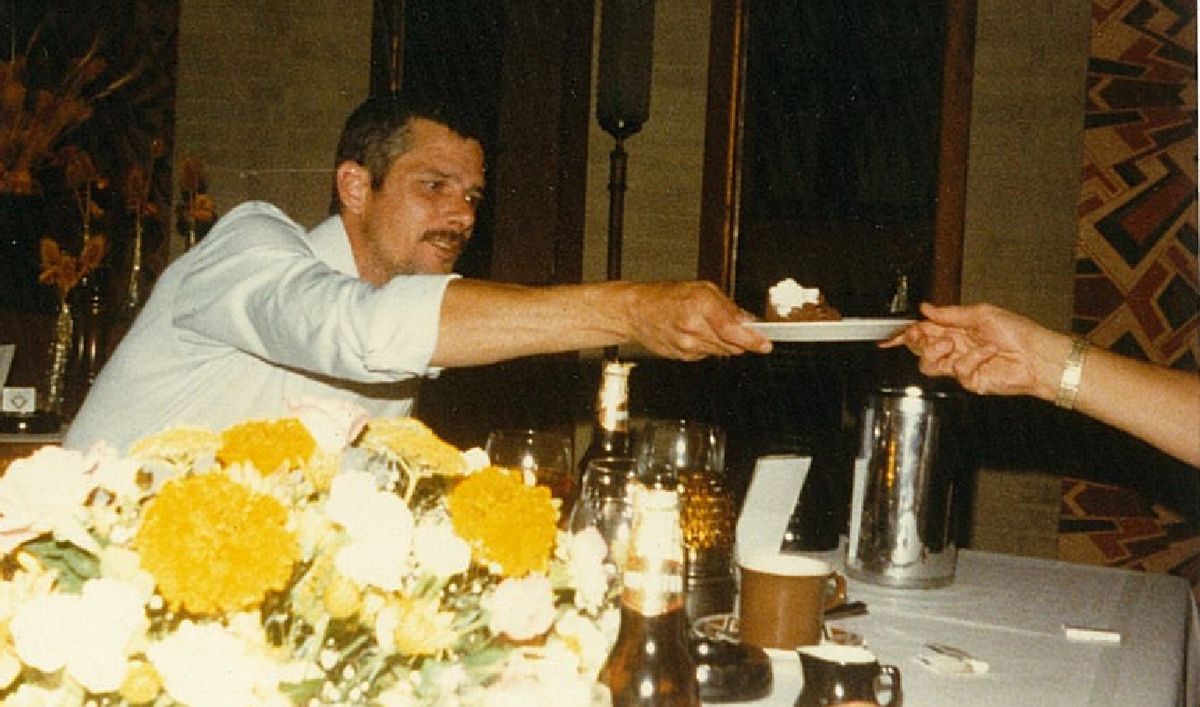 Herb with his spice cake
--

When my godfather, Herb, learned that he was finally dying for real this time, he threw a party. "Like in 'The Cherry Orchard,'" I said wryly. In college, I had once played Lyubov Ranevskaya, the matriarch of Chekhov's obsolescent Russian aristocrats.

"Or the musicians on the Titanic, going down playing 'Nearer My God to Thee.' Have you seen 'A Night to Remember'? 1958" The cancer had made his voice thin and whispery. He could no longer drop it down to basso, as he did when quivering out his Katharine Hepburn impersonation ("…th-hen I met James Ty-RO-HUN and fell in LUH-HUV and was so HAP-peh--for a TIIME...") or recounting the story of the time he met "Miss Ahhnngelou."

Radiation had failed, and chemo was not recommended. He could have opted for surgery to remove the larynx and learned to talk again through a mechanical device. The Ranevskayas could have saved themselves from ruin by razing their beloved cherry orchard.

So: a party. Champagne and slices of his famous saffron spice cake, the one that had taken second prize in the Maui County Fair. The toast was given by the guest of honor: "At least I won't die of AIDS!" he crowed, triumphant as his feathery voice allowed.

Even then, I didn't quite believe it. "Uncle Herb" had been dying for as long as I could remember. After Paul's death in 1988, he had moved from Hollywood to be near us, so my mother could help to care for him at the end, which the doctors assured him would be in three months or six -- a year at the most.

"You won't have to buy Myrlin a car when she gets her license," he announced to my mother in his inimitable high style: part gallows humor, part drama queen. He punctuated his lines with deep drags on his cigarette -- why quit smoking? "I'll be dead by then and she can have mine."

I, then 13, eyed the '78 Ford Fairmont, with its bumper sticker from a California burger chain modified with a razor blade to read IN-N-OUT URGE, and prayed that he would outlive it, at least.

A peculiar fairy godfather, his gifts were eclectic, and often mostly intangible. Herb bought my first pair of shoes: white patent-leather Mary Janes, which, he gravely informed the stroller's tiny occupant, must never, ever be worn past Labor Day. Then, gallantly wheeling me out the door, he had announced: "Now that was Saks. And someday I will present you at the Court of St. James's."

He never did present me at the Court of St. James's, but he flew to Portland to see me graduate from college. He was on the phone when I brought my boyfriend around to the hotel to meet the folks, and held up a finger to us: Just a minute.

"Hello," he said into the receiver with his perfectly clipped speech, "Is this the Eagle? Just to be clear, the Eagle, the leather bar? Mm-hmm." He smoothed his neatly trimmed mustache. "And what would be a good time for an older gentleman from out of town to come in, have a drink, maybe meet a few of the locals? Eight o'clock?" He checked his watch. "Excellent. I'll just have a little supper, then watch 'Jeopardy!' and finish the crossword puzzle, and I'll be right over." He clicked off the phone and peered over his glasses at my date. "So tell me -- are you two having safe sex?"

He had by then become a fixture at the Maui AIDS foundation, doing education, outreach, client services. A legend as well, for though his tale -- of cocktails, treatments, near-undetectable viral loads -- is not uncommon now, back then it was extraordinary: an island of hope in a sea of despair. When he was diagnosed with cancer "unrelated to the HIV," I remembered something my mother had said some years before, when a social worker at the foundation had died suddenly of a stroke, rattling everyone. Surrounded on all sides by death -- but death tested for, foretold, that followed a predictable, inevitable course -- we'd all forgotten that its underlying cause was not AIDS, but life.

After the party, Herb did not last long. A few weeks later, I received my last letter in his precise handwriting. Not an official will and testament, it nonetheless bequeathed to me my small inheritance. The Fairmont being long gone, these were remembrances of more modest taste -- his amethyst ring; the Rockwell Kent illustrated Shakespeare ("… no need to feel you must read every word …") and bookplate sketch.

But the most precious gift of all was humbly tucked into a separate envelope: a red ribbon from the county fair, and the recipe that had won it --  a yellowed newspaper clipping with his additions and innovations noted in ballpoint pen.

I am an imprecise cook normally, measuring my ingredients to the knuckle or by the pinch. But remembering Herb's impeccable correctness in all things, I followed his instructions to the letter, grinding cloves and caraway seeds with my mortar and pestle, measuring out cinnamon and nutmeg by the half-teaspoon.

But before I poured the batter into the bundt pan, on sudden impulse I reached for the jar of cayenne pepper, and added just a sprinkle. I find it brings out the warmth of the saffron and gives the spices in the cake a little extra kick. So my recipe may not be exactly the same as my godfather's, but it reminds me of him anyway: classic taste. Unexpectedly spicy. Improves as it ages. Goes well with Champagne, and dancing while the ship goes down.

Myrlin A. Hermes is a novelist living in Portland, Ore. Her most recent book, "The Lunatic, the Lover, and the Poet," is dedicated to her late godfather. Find out more at her website.

MORE FROM Myrlin A. Hermes