An awful argument for replacing Biden with Hillary 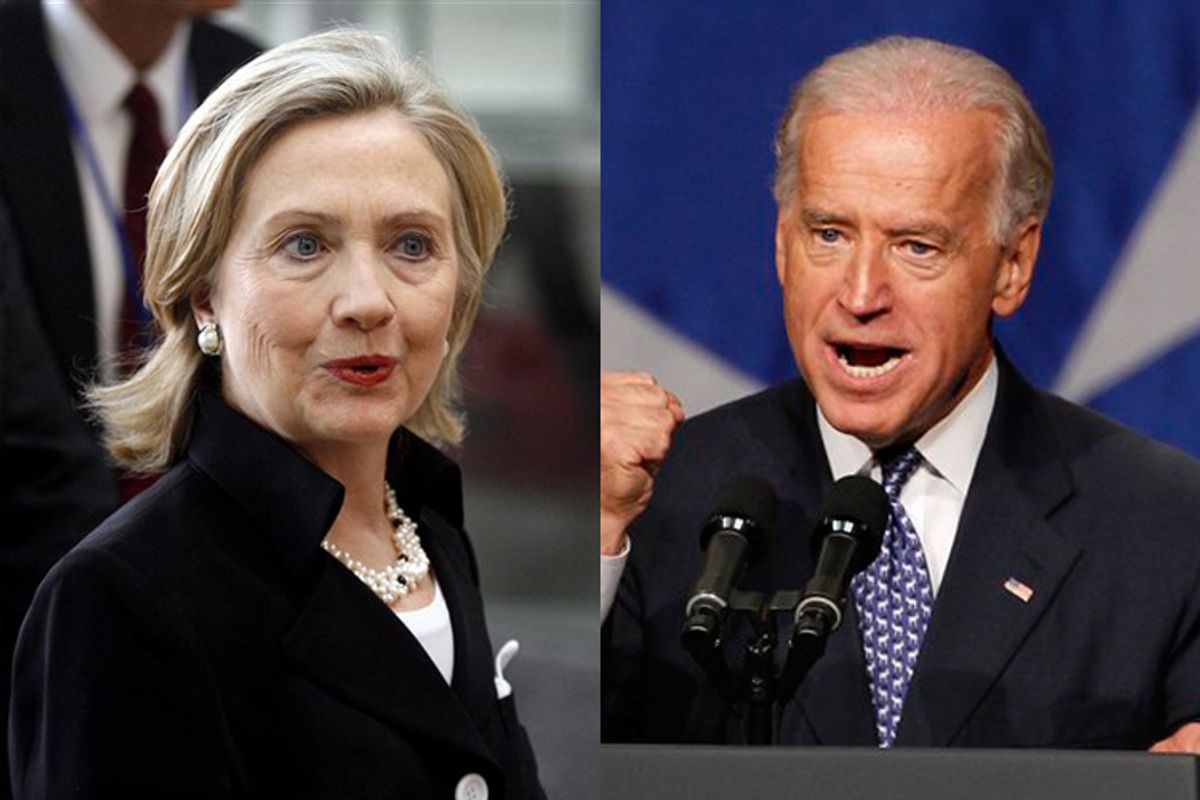 To put it politely, I'm skeptical of the chatter about Hillary Clinton replacing Joe Biden on the Democratic ticket in 2012. It would just be too complicated and so ... unnecessary.

But the idea is back in the news this week, thanks to a mischievous Politico Op-Ed from, of all people, former Virginia Gov. Doug Wilder. Wilder's piece prompted a "Hardball" segment yesterday, in which John Heilemann made an absolutely terrible case for why a Hillary-Biden switch would be good for Obama's '12 prospects:

Ugh. Basically, Heilemann is repeating the exact same argument that we heard throughout the spring and summer of 2008 -- that Obama had a problem with white, working-class voters in places like Pennsylvania and Ohio that only Hillary "Frank Rizzo" Clinton could help him solve. And yet, Obama didn't pick Clinton and, as Heilemann noted last night, he went on to win a surprisingly high share of the white vote in 2008. So Obama has already demonstrated that he can do OK with white voters without the Clintons.

Of course, as Heilemann noted, Obama isn't doing nearly as well right now among white voters. A Quinnipiac poll last week found that only 28 percent of them say that they'd vote to reelect him if the '12 election were held now. But adding Hillary Clinton isn't the solution to this problem; turning the economy around is.

As I noted on Sunday, Obama's poor numbers with white voters are certainly alarming -- and, given the overtly racist attacks that some on the right have leveled against him, it's tempting to believe that his race accounts for this. But things start to look different when you remember that, at this same point in his presidency, Bill Clinton -- a white Southerner who many referred to as "Bubba" -- was faring just as miserably with white voters, worse even. Heading into the '94 midterms, his approval rating with white men was around 20 percent -- and it was in the single digits in some Deep South states. Overall, Democrats lost white voters by 24 points in the '94 midterms. But it was a much different story just two years later. The economy was stronger and voters had come around on Clinton. He fought Bob Dole to a draw among white voters, and won by 8 points overall. The campaign was a snooze.

If the economy turns around, you can expect Obama to win back those white voters who were with him in '08 but who have turned away as the economy has continued to struggle. And if the economy doesn't turn around, adding Hillary to the ticket won't help; for all the hype, running mates don't affect presidential elections. (Just remember how thorough the mismatch between Lloyd Bentsen and Dan Quayle was in 1988 -- and how little it translated into on Election Day for Michael Dukakis.)

Plus, if the economy is still feeble in '12 and Obama is in peril, I doubt Hillary would want to be his new running mate. As Heilemann noted, it's fair to assume she wants to run in '16, so joining a doomed ticket -- since, again, she'd basically be powerless to help Obama -- could tarnish her standing. Staying away would allow her to emerge cleanly from any Obama '12 wreckage. (For real junkies: A scenario like this played out in New Jersey last year, when Jon Corzine begged Newark Mayor Cory Booker to join his ticket. Booker, who wants to run for governor in 2013, smartly refused. He knew he'd be blamed if Corzine lost.)

The Hillary-Biden talk isn't surprising, given her celebrity and the fact that Biden will turn 74 at the end of 2016. She's clearly a more natural heir to the Democratic throne. But she'll still enjoy that status even if she stays off the Democratic ticket in '12. And she could lose it if she were to join the ticket and then lose.