The anti-gay right responds to the Prop 8 ruling 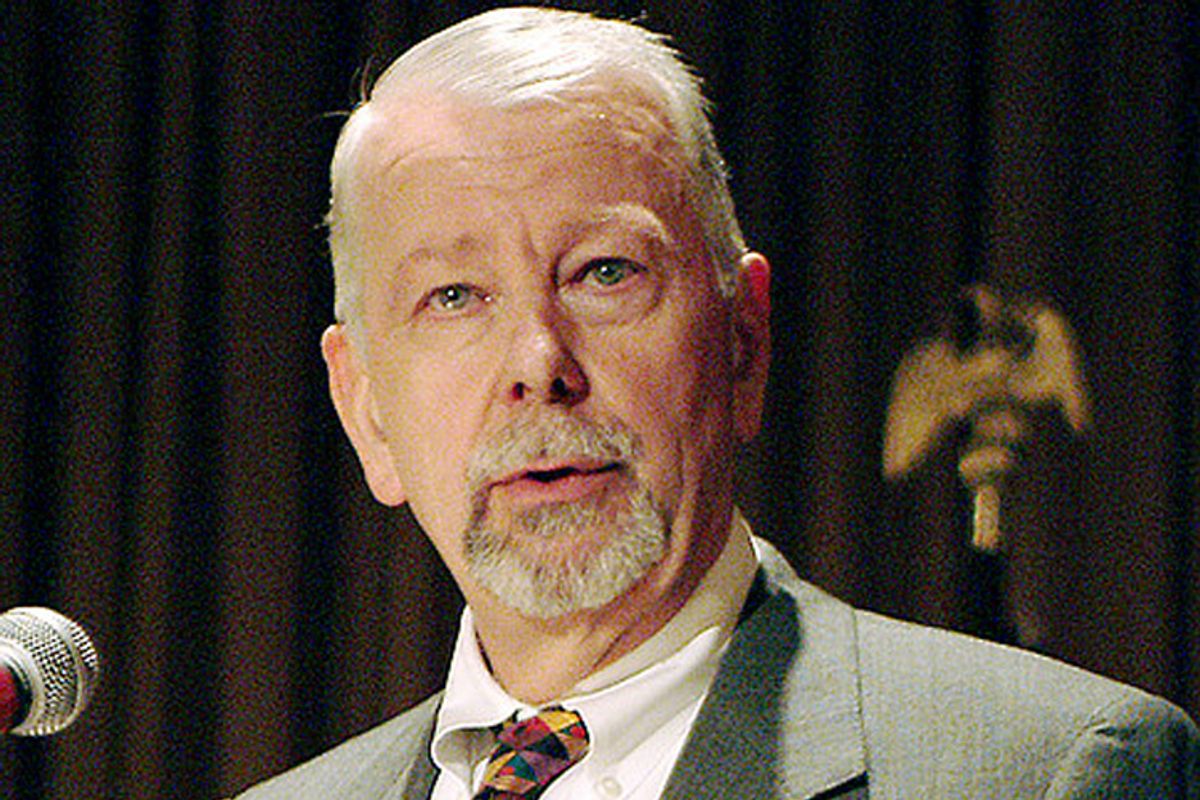 Judge Vaughn Walker ruled today that California's ban on gay marriage is unconstitutional, on 14th Amendment grounds. His entire decision is here, and Marc Ambinder lays out Walker's factual findings here. But he leaves important facts out! Like: Judge Walker is a homosexual judicial activist who hates American values!

Because this decision was expected, a lot of the right-wing outrage was preemptive (Walker should've recused himself because he could benefit from getting gay married, someone at Fox argued today).

After a dry Corner post from Daniel Foster excerpting the decision, Kathryn Jean Lopez popped in to be sad, and compare Judge Walker's ruling to "an academic seminar at Berkeley." (Oh, Berkeley! They simply do not understand America and their crazy ideas have no place in court rulings.)

And the National Organization for Marriage -- a group that, contrary to its name, is against a certain class of people getting married -- sent out a press release decrying the decision.

“The ‘trial’ in San Francisco in the Perry v. Schwarzenegger case is a unique, and disturbing, episode in American jurisprudence. Here we have an openly gay (according to the San Francisco Chronicle) federal judge substituting his views for those of the American people and of our Founding Fathers who I promise you would be shocked by courts that imagine they have the right to put gay marriage in our Constitution. We call on the Supreme Court and Congress to protect the people’s right to vote for marriage,” stated Maggie Gallagher, Chairman of the Board of NOM.

(Well, yes -- the founders would've been shocked, because the decision was based in part on the 14th Amendment, which the founders had nothing to do with, because they owned people as property.)

Gallagher goes on to proclaim that gay rights groups will rue the day they won this important victory, because they cannot control their "egomaniacal lawyers," former Solicitor General Ted Olson and David Boies, two of the most successful and respected lawyers in the United States.

So while they congratulate themselves over their victory before their home-town judge today, let’s not lose sight of the fact that this case is headed for the U.S. Supreme Court, where the right of states to define marriage as being between one man and one woman will be affirmed—and if the Supreme Court fails, Congress has the final say.

But... if the Supreme Court "fails" -- that is, determines that a gay marriage ban is unconstitutional -- what can Congress do, exactly? Pass an authorization of military force against Berkeley?

And K-Lo is also ready with an interview with the non-Gallagher person from NOM, Brian Brown. He is not surprised by the ruling, but he is very saddened by how terrible gay people are. "You know what real equality is? One man with one woman, that’s equality." So, that's cleared up.

He also has an important message for Americans:

Q: What do you most wish people knew about the whole Prop 8 fight?

A: Gay marriage has consequences. The goal of this movement is to use the law to reshape the culture so that disagreement with their views on sex and marriage gets stigmatized and repressed like bigotry. Children will be taught, whether parents like it or not, that traditional faith communities’ views on marriage are based on hatred and bigotry. In the new America they are attempting to build, core civil rights will be sacrificed for imaginary ones that will then be used to exclude most religious people and institutions from the public square. We are already seeing the beginnings of this great purge in the academy, and it will march from there through professional licensing and institutions in ways that will affect a great many people.

Yeah, well, if it's true that "gay marriage has consequences," you should've been able to point to a single one of them in a court of law, right?

(Prop 8 bigots did win an Order for Stay, delaying the issuing of marriage licenses to gay couples until Walker hears arguments over whether or not Prop 8 should remain in place pending its appeal.)