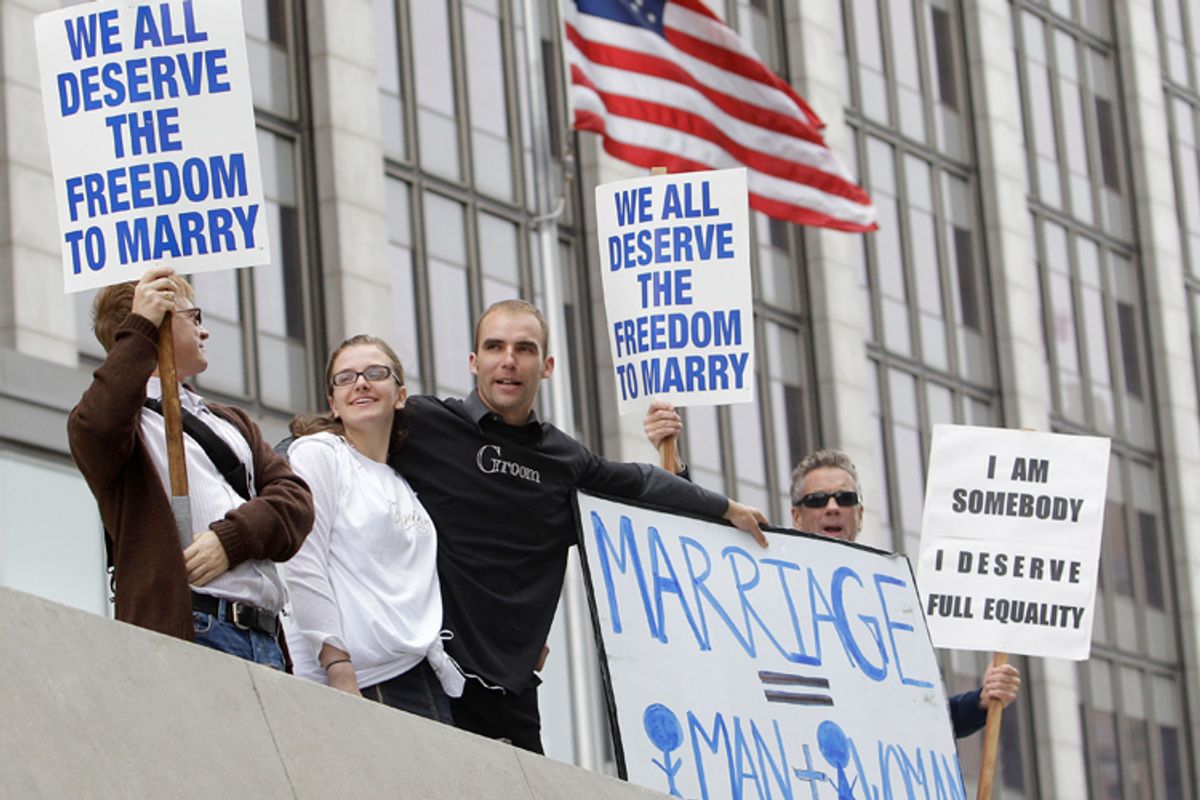 Proponents and opponents of Proposition 8, outside of the Phillip Burton Federal Building in San Francisco on Wednesday.
--

A federal judge overturned California's same-sex marriage ban Wednesday in a landmark case that could eventually land before the U.S. Supreme Court to decide if gays have a constitutional right to marry in America.

Chief U.S. District Judge Vaughn Walker made his ruling in a lawsuit filed by two gay couples who claimed the voter-approved ban violated their civil rights.

Supporters argued the ban was necessary to safeguard the traditional understanding of marriage and to encourage responsible childbearing.

"Proposition 8 fails to advance any rational basis in singling out gay men and lesbians for denial of a marriage license. Indeed, the evidence shows Proposition 8 does nothing more than enshrine in the California Constitution the notion that opposite-sex couples are superior to same-sex couples," the judge wrote in a 136-page ruling that laid out in precise detail why the ban does not pass constitutional muster.

Both sides previously said an appeal was certain if Walker did not rule in their favor. The case would go first to the 9th U.S. Circuit Court of Appeals, then the Supreme Court if the high court justices agree to review it.

Walker heard 13 days of testimony and arguments since January during the first trial in federal court to examine if states can prohibit gays from getting married.

The ruling puts Walker at the forefront of the gay marriage debate. The longtime federal judge was appointed by President Ronald Reagan.

The verdict was the second in a federal gay marriage case to come down in recent weeks. A federal judge in Massachusetts decided last month the state's legally married gay couples had been wrongly denied the federal financial benefits of marriage because of a law preventing the U.S. government from recognizing same-sex unions.

The plaintiffs in the California case presented 18 witnesses. Academic experts testified about topics ranging from the fitness of gay parents and religious views on homosexuality to the historical meaning of marriage and the political influence of the gay rights movement.

Former U.S. Solicitor General Theodore Olson delivered the closing argument for opponents of the ban. He told Judge Walker that tradition or fears of harm to heterosexual unions were legally insufficient grounds to discriminate against gay couples.

Olson teamed up with David Boies to argue the case, bringing together the two litigators best known for representing George W. Bush and Al Gore in the disputed 2000 election.

Defense lawyers called just two witnesses, claiming they did not need to present expert testimony because U.S. Supreme Court precedent was on their side. The attorneys also said gay marriage was an experiment with unknown social consequences that should be left to voters to accept or reject.

Former U.S. Justice Department lawyer Charles Cooper, who represented the religious and conservative groups that sponsored the ban, said cultures around the world, previous courts and Congress all accepted the "common sense belief that children do best when they are raised by their own mother and father."

That left the work of defending the law to Protect Marriage, the group that successfully sponsored the ballot measure that passed with 52 percent of the vote after the most expensive political campaign on a social issue in U.S. history.