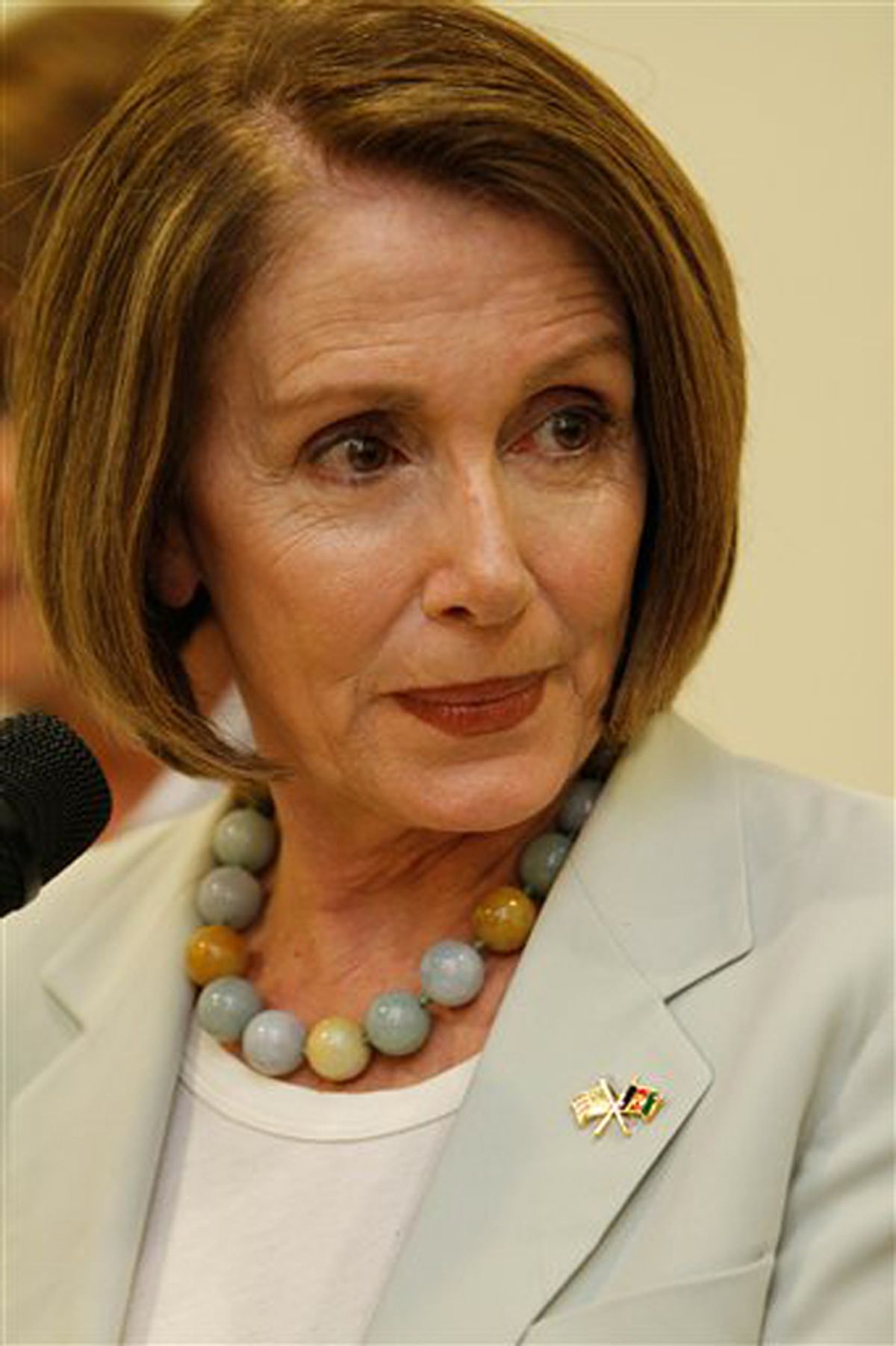 Speaker of the US House of Representatives Nancy Pelosi (D-CA), speaks during a press conference in Kabul. Afghanistan, Sunday, May 9, 2010. She is visiting Afghanistan with colleagues Reps. Susan Davis, D-Calif.; Niki Tsongas, D-Mass.; Donna Edwards, D-Md., and Madeline Bordallo, D-Guam. They were to meet with Afghan women who counsel victims of sexual assault, female Marines who engage with Afghan civilians in the field and Afghan women who have received vocational training. (AP Photo/Dar Yasin) (Dar Yasin)
--

Clarity of thought is rare in both political press coverage and public opinion, but the reaction so far to the House ethics cases brought against Reps. Charles Rangel and Maxine Waters is well beyond average stupid.

According to conventional media wisdom -- always heavily influenced by Republican noisemakers -- the Democrats should expect to suffer because two powerful committee chairs from their party are undergoing ethics investigations. But why should Speaker Nancy Pelosi and the Democrats take the blame when they brought reform that led to those investigations, regardless of the political consequences?

Yet, having thrown out the bums who tolerated corruption for so long under Republican leadership, the public is supposedly itching to throw out their replacements, who have reformed the House rules, created a new Office of Congressional Ethics, and handled every case impartially, as promised when the Democrats took over in January 2007. Voters have plenty of reasons to feel frustrated and angry this year, but ethics reform is not among them.

The most telling remark uttered by anyone in the wake of the release of the ethics charges against Rangel came from one of his most dedicated right-wing antagonists, Peter Flaherty of the National Center for Policy Analysis. "We're kind of astonished it's gone this far," said Flaherty, whose organization instigated one of the early investigations of the Harlem congressman. "We always believed the allegations against Rangel were serious, but we never thought the Ethics Committee would do anything."

Obviously Flaherty, a lifelong Republican who once headed a lobbying group called Citizens for Reagan, expected that the committee would function much the same way under Democratic leadership as it did under the Republicans. Which specifically would mean playing dead, particularly with respect to any allegations against a committee chair or majority leadership figure. He was wrong.

Back when the Republicans controlled the House, however, their stewardship of ethical standards was a pitiful sham. They set the coverup agenda when they voted in November 2004 to withhold any sanctions against Tom DeLay, then the House majority leader, even if he were to be indicted on a felony count. Naturally they held that vote in secrecy, just after the presidential election, because they represent honesty, transparency and apple pie. (Eventually a surge of public outrage forced them to restore the Democrats' old rule requiring an indicted member to step down.)

Rather than punish DeLay, the Republican majority purged their decent colleagues on the ethics committee who had voted to admonish him -- and replaced them with pliable stooges, including Rep. Tom Cole, now a deputy whip under Minority Leader John Boehner. Their only notable achievement was to stall inquiries into the revolting behavior of Mark Foley, Randy Duke Cunningham and Bob Ney, failing to investigate even as the latter two were on their way to prison (a fate that Foley narrowly escaped). Indeed, during the Republicans' tenure, five representatives were convicted of felonies, three more were indicted, and a dozen were reportedly subjects of FBI probes -- while they literally did nothing.

So will someone please explain how the ascension of Boehner, Cole and their cohort would improve the ethical climate in the House? As Boehner surely knows, the rule Rangel violated when he accepted those controversial Caribbean junkets was part of Pelosi’s reform. And as he surely remembers, he opposed that rules change -- perhaps because he would have violated the travel rule more than once had it been in effect a year or two earlier. An avid golfer, the Republican leader especially loves to play and work on his tan whenever he can cadge a free ride to Boca Raton, where, between rounds, he can also promise tax breaks to the commodities traders who have generously donated to his campaign war chest.

The sole distinguishing moment in Boehner’s career, prior to his elevation to the leadership, came back in 1995, when he brazenly passed out checks from Brown & Williamson, the tobacco company, to members on the House floor. Having been caught, he apologized for making a "mistake." He was a debased flunky for corporate lobbyists then and he has not changed.

So much for the ethical bona fides of the would-be speaker and his crowd.

Perhaps the alleged misconduct of Rangel and Waters is so deplorable that they must be punished. Let the evidence be set forth for their colleagues to evaluate. But if the House punishes any wrongdoing, that will happen because Pelosi’s reforms were real and the majority has enforced them. The only thing more foolish than blaming the Democrats for the alleged misconduct of Rangel or Waters would be to believe that the Republicans would enforce ethical standards with any semblance of rigor. They certainly never did so when they were in power.