The ADL chief's bigotry has been hiding in plain sight for years. Now that we all see it, it's time for him to go 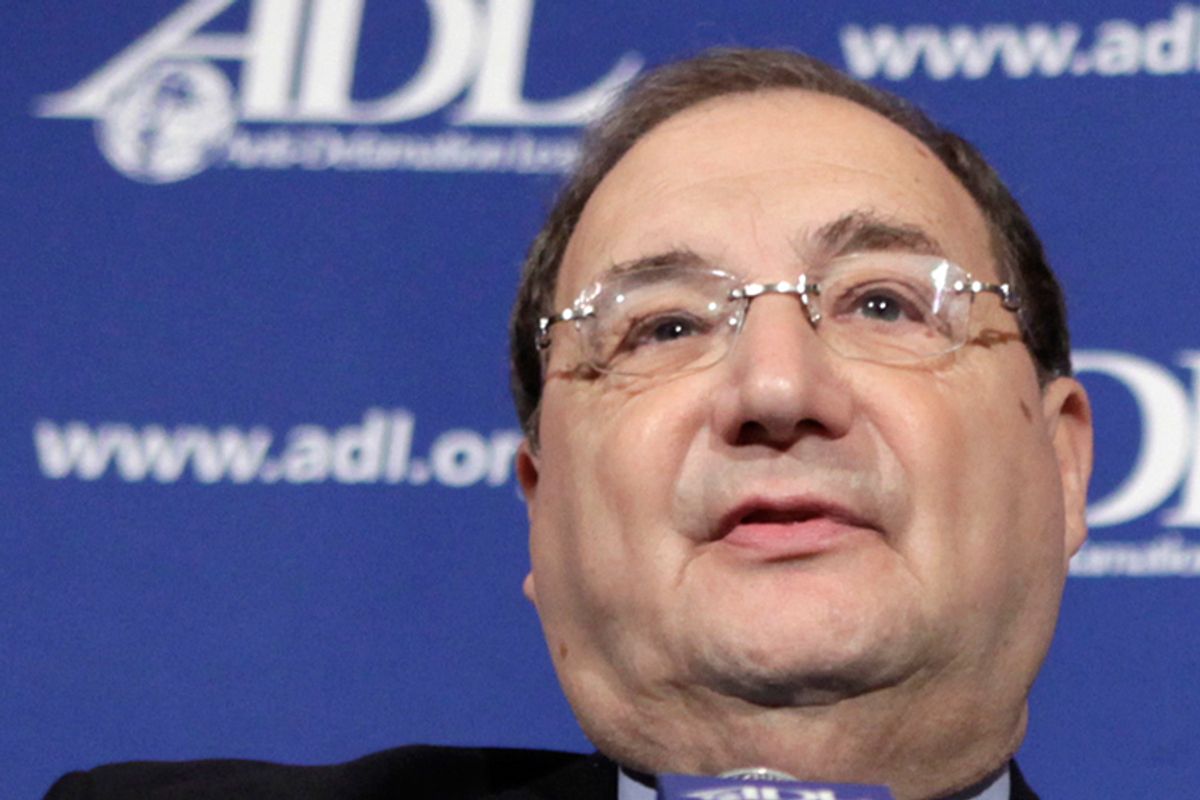 To many Americans, the decision of Abe Foxman, the head of the Anti-Defamation League, to oppose the so-called "ground zero mosque" seemed out of character. After all, Foxman is often treated by the media as an arbiter of tolerance; that he would come out in favor of Islamophobia was jarring.

But in truth, Foxman's actions have been out of step with the stated mission of the ADL for some time. What is new is the backlash his latest pronouncement has generated, with even many of his traditional allies speaking out against him. And since his role is so dependent on moral authority, it may now be time for him to think about finding another job.

The ADL's mission has always been to aggressively promote tolerance. They've relentlessly called attention to white power groups, from the KKK to the neo-Nazis to the militia movement, and sponsored diversity-oriented educational programs. They've also been somewhat supportive of interfaith relations, denouncing an anti-Mormon film in the early 1980s.  They can be an attack dog, the public face of the Jewish nonprofit sector, willing to make a public stink about anti-Semitic comments even when others are hesitant.

Running parallel to this history of laudable public service, however, is a darker story centering largely on Foxman. The ADL's private domestic spying operation had been going on since its inception, but after Foxman took over it engaged in operations like spying on anti-apartheid activists and other non-extremist groups. Foxman and the ADL became worried as much about direct domestic persecution of Jews as they were about opposition to Israel, and began to equate anti-Zionism with anti-Semitism. Certainly, anti-Zionism can bleed into anti-Semitism, but Foxman has taken this to a cartoonish degree, demanding apologies from Americans for expressing views on Palestine that would be well within the mainstream in the context of Israeli domestic politics.

Why is Foxman such a caricature? The best explanation may be generational. Like other Jewish men his age, Foxman grew up in a far less tolerant world, and his paranoid policing of public discourse springs from that different formative experience. But today, in a country that's more pro-Jewish than almost any other in the world, his antics seem out of place, particularly to younger Jews. But a broader point might simply be that he is a classic neoconservative, while the vast majority of American Jews are liberal, and this disconnect has made him less and less able to convincingly play the role of representative of the Jewish people.

Foxman's conservatism is clear in his selective outrage. He refused to condemn anti-Semitic statements by Sun Myung Moon's Bush administration-allied Unification church, declined to protest Fox News' frequent use of Nazi imagery for the purposes of political vilification -- and, of course, in contrast to his opposition to an anti-Mormon film, he's happily gotten on board with the anti-Islamic sentiment that even he acknowledges is key to opponents of the Park51 project near ground zero.

To those who've been watching closely, Foxman's mosque posture could be seen coming. After 9/11 resulted in a surge of anti-Muslim sentiment in America, it became impossible for him to both fulfill the ADL's historical mission of promoting religious tolerance and advance neoconservative goals, which were often explicitly anti-Muslim.

The ADL's work is extremely important. To have someone opposed to its fundamental mission at its head greatly diminishes its capacity to accomplish its goals. Foxman owes it to the organization to which he's dedicated his life to step down and join something that aligns more closely with his present interests, like, say, the Heritage Foundation.

The broad visibility of his hypocrisy -- and even bigotry -- on this issue has fundamentally changed the way many Americans view Foxman and the ADL. For a long time, he's managed to mix his political ideology with a religious identity, giving his views a kind of untouchable glow. But no longer. Do American Jews really want Abe Foxman to be their spokesman?