As exciting as it was, today's decision is just one step on the path to a Supreme Court showdown 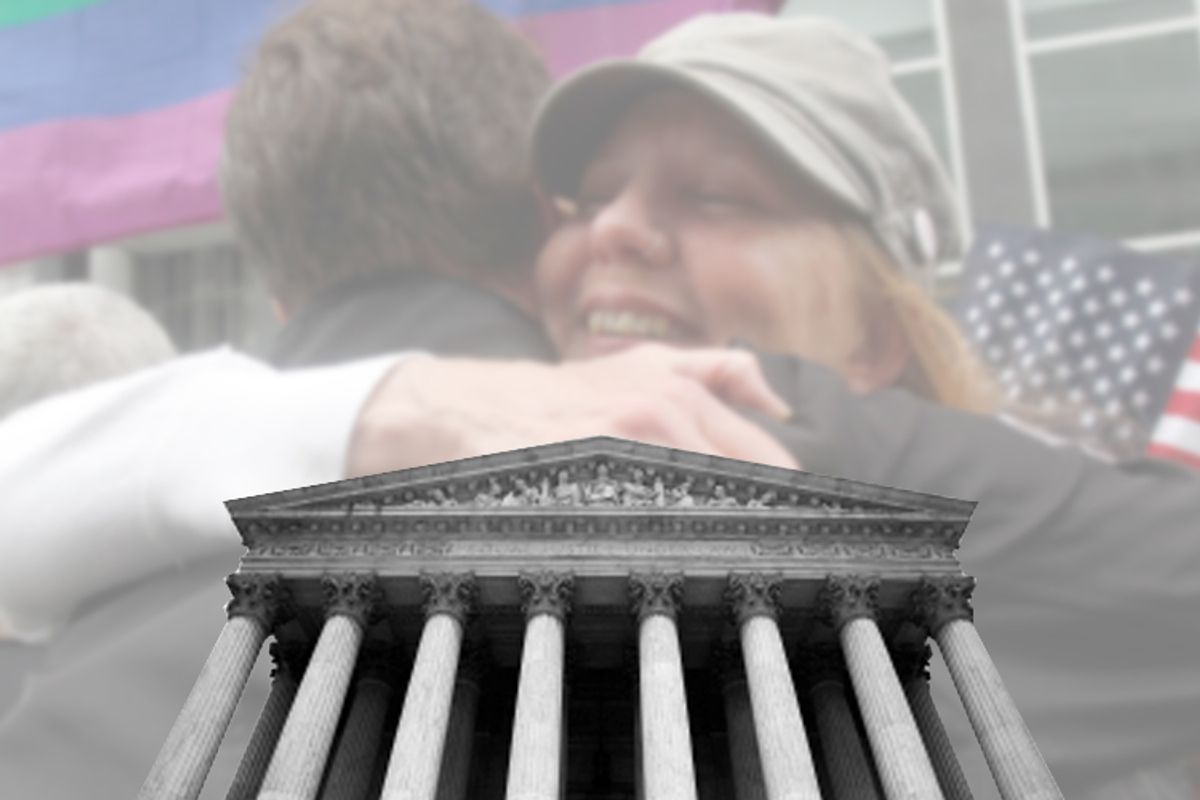 Judge Vaughn Walker’s decision to strike down California’s ban on gay marriage is a big victory for the cause of gay equality in America.

But the walk down the aisle to constitutionally protected same-sex marriage has many steps to go. Opponents of gay marriage are already on their way to the United States Court of Appeals for the 9th Circuit to reverse Walker's decision. Three appeals judges will hear it next, and the loser after that will surely ask for an 11-judge panel to rehear it -- and there’s even a procedure for all 28 of the 9th Circuit's judges to give it another swipe. And all of this will come before the real show in the United States Supreme Court.

Still, it's worth noting how thorough the gay and lesbian plaintiffs' victory was on Wednesday. Walker sided with them on every single point, and even ruled that the defendants’ chief "expert" -- David Blankenhorn, a social commentator and labor historian with his own think tank but with no peer-reviewed writings on the subject of same-sex marriage (or any kind of marriage) -- lacked the qualifications and demeanor to be an expert witness and discounted his testimony as impermissible lay opinion.

We can take solace in Walker’s workmanlike subjection of Blankenhorn to the conventional legal standards for expertise. It is just these standards that distinguish the process of adjudication from the political arena, where, as the Proposition 8 campaign in California so graphically revealed, anyone can say anything.

The best news for gay marriage supporters, though, is that the legal road ahead -- as unpredictable and potentially lengthy as it is -- amounts to a win/win for them. If they win, they win -- that's easy. But if they suffer any legal defeats, they'll also win, because legal setbacks are just investments in victory down the road. History shows that these run-up cases, no matter the outcome, play a crucial role in changing the conversation.

The Proposition 8 case has already done its job in this regard. Reading Walker’s opinion is like taking a short course in the glories of American constitutional history, teaching us that human enterprises are specially protected; disempowered minorities are specially protected; and that the law has to be justified by purposes both rational and secular. Once the conversation changes, victory becomes inevitable. As the saying (sort of) goes, one more such loss and gays shall be victorious.

This is not the conventional wisdom, of course, which has it that winning the litigation is everything, and all the rest is commentary. That’s why mainstream gay litigation groups like Lambda Legal and the ACLU were so frantic that David Boies and Ted Olson were jumping the gun on public opinion and would just produce a horrible defeat before the movement had a chance to build a political foundation for a positive decision.

That conventional wisdom was wrong. Triumphs for equal protection movements have almost always been preceded by at least one harrowing defeat, and usually a series of them -- often appearing with increasing rapidity as the rising group got closer to its goal.

In the lead-up to the Supreme Court’s school desegregation decisions, for instance, the court upheld segregated railroad cars and higher penalties for black fornication. A decade before the court recognized women’s claims to equality, it affirmatively approved excluding them from bartending -- and jury service. Twice in the decade before the court recognized the claims of the sexual revolution and overturned a state contraception ban, it found reasons to leave alone the Catholic-dominated state legislatures shutting down Planned Parenthood. A mere 20 years before the court stopped the practice of sterilizing the mentally disabled in 1947, it gleefully embraced eugenicists, declaring "three generations of imbeciles is enough."

Defeats lead to victory because, in justifying them, the court sounds increasingly foolish to Americans and the pressure to change positions becomes irresistible.

When the Supreme Court doesn’t want to interfere with what the political branches have done, its best hope is to be able to duck the issues. But the court is not in a great position to duck this time. Other cases challenging various gay marriage bans are coming up through at least two appeals courts now, and one of those courts has already invalidated part of the federal gay marriage ban. As with eugenics, racial segregation and gender discrimination, gay marriage is probably now too ripe for the Supreme Court to avoid this issue.

The American system of justice puts limits on what justifications a court may consider. The Proposition 8 case offered a classic example of this. During the trial, the defendants leaned on their successful political strategy of scaring the children as a reason to ban gay marriage. They forcefully pursued Yale historian George Chauncey to admit on cross-examination that parents have a right to protect their children from learning that gays and lesbians could marry and live happily ever after. Finally, Chauncey had had enough. "Why not?" he asked his cross-examiner. "What’s wrong with gay people? Shouldn’t children be allowed to read books in which interracial couples marry and live happily ever after?"

Walker zoomed right in on this colloquy in his opinion. The political campaign against same-sex marriage, he concluded, is based on the assumption implied in the save-the-children campaign -- that there is something inherently wrong with gay and lesbian people. That may work in the world of political attack ads, but it’s not good enough for the Constitution of the United States.

In the California campaign, gay marriage foes could set up a site called "ProtectMarriage.org." But when Walker asked their lawyer what harm marriage would require protection from, ProtectMarriage’s lawyer said, "I don’t know. I don’t know." When even their own "experts" couldn't show any evidence of harm to marriage, their lawyer was reduced to arguing that the people could act without evidence, just on their inchoate fears alone. Inchoate fears are the stuff of political campaigns -- not constitutional litigation.

Seeing how anti-gay marriages arguments look in the reasoned precincts of the law changes perceptions. On the eve of closing arguments in this case, the New York Times published a lead editorial advocating the constitutional protection of same-sex marriage. That same week, the Times’ influential columnist, Frank Rich, published an opinion piece to the same effect. The Washington Post carried an opinion piece by the heads of two of the most influential liberal and conservative think tanks, the Center for American Progress and the Cato Institute, in support of gay marriage. This all helps alter ideas about the legitimacy of same-sex marriage.

In other words, even if the Supreme Court repeats its sorry history and rejects gay marriage at first, it will only mean that victory is right around the corner.