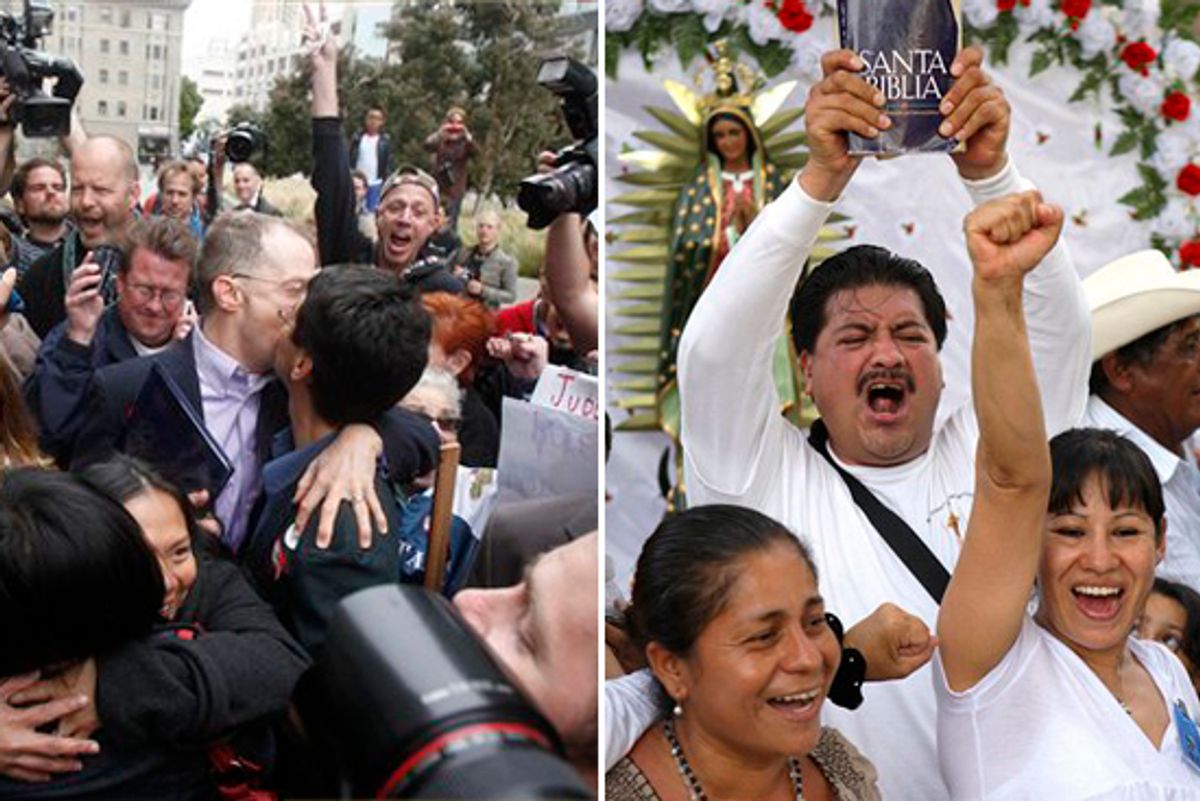 Opponents of Proposition 8 cheer after hearing the decision in the United States District Court proceedings challenging Proposition 8 outside of the Phillip Burton Federal Building in San Francisco, Wednesday, Aug. 4, 2010. The first word on whether California's same-sex marriage ban can survive scrutiny under the U.S. Constitution is expected to come down Wednesday when a federal judge issues his ruling in a landmark case challenging the voter-approved Proposition 8 as an unlawful infringement on the civil rights of gay men and lesbians. Attorneys on both sides have said appeals are certain if Chief U.S. Judge Vaughn Walker does not rule in their favor. (AP Photo/Jeff Chiu) (Jeff Chiu)
--

SAN FRANCISCO -- When I heard about Judge Robert Vaughn Walker’s ruling on same-sex marriage I immediately thought of one person: Judge Susan Bolton.

On July 28 Susan Bolton issued an injunction that defanged the anti-immigrant S.B. 1070 in Arizona. On Aug. 4, Vaughn Walker found California’s Proposition 8 that outlawed same-sex marriage unconstitutional. For this they will both be tarred as “judicial activists.” Judge Bolton has received death threats. Judge Walker is being denounced.

I have no idea if the two judges know each other, but within one week, they had suddenly brought together two parts of who I am. As a gay immigrant, I am used to juggling identities, never sure which one is acceptable in which setting, which one I should check at the door.

Now, suddenly, I feel the full weight of the U.S. Constitution behind both identities, affirming both of them. It is a rare feeling and a majestic one.

As Kamala Harris, San Francisco's district attorney, told the crowd celebrating Judge Walker’s decision in front of San Francisco’s City Hall, "Good for us for fighting for the ideal of our country. And winning."

Yes, both victories are just rest stops in much bigger fights. Both fights are probably headed for an uncertain future in the U.S. Supreme Court. But until today I didn’t realize that in some ways it’s the same fight. Supervisor David Campos told the cheering crowd that this was about "justice for all" -- not just "gays and lesbians, but immigrants and minorities and transgender."

That can sound like San Francisco big umbrella talk. But these cases touch each other in ways I didn’t realize. My numerologist friend said, "Of course they do, the digits in 1070 add up to, you guessed it, 8."

But there is a deeper connection.

Both issues are resulting in a patchwork of laws, happening state by state. In one case, it is because of the lack of comprehensive immigration reform at the federal level. In the other it's because of the Defense of Marriage Act at the federal level. Democrats are nervous about both issues, trying to walk a fine political line. Both have become electoral tripwires even when not on the ballot. And as Out4Immigration's Amos Lim points out, binational gay and lesbian couples are caught in the gap between the two. Gay marriage in California will not help them until there is immigration reform in Washington.

The fight over illegal immigration is about federal jurisdiction and states' rights but it also boils down to the 14th Amendment. That’s the grand prize, the Holy Grail that the Russell Pearces of Arizona are really aiming to overturn. Pearce wrote in an e-mail obtained by CBS 5 News: "I also intend to push for an Arizona bill that would refuse to accept or issue a birth certificate that recognizes citizenship to those born to illegal aliens, unless one parent is a citizen."

When I became a citizen of the United States I learned about the amendments to the Constitution. But those were just words in a civics lesson. Standing in front of San Francisco’s City Hall, its golden dome glowing dully in the gray foggy evening, surrounded by hugging couples, the Sisters of Perpetual Indulgence, black ministers and Asian lesbians, all carrying signs that said "Justice," I realized that the equal protection clause means something, that the due process clause means something, the citizenship clause means something. Something real that was about me. And the man next to me hugging his shivering dog. And the two women next to him with their arms around each other. That clause once meant to give the children of slaves real citizenship rights in America was protecting all of us as well.

Perhaps that was why Eva Paterson, the civil rights lawyer who heads Equal Justice Society, told the crowd that when she heard the ruling she felt "the sense of shackles dropping."

I don’t know how many people in that audience made that connection. The good thing about living in a bubble like San Francisco is when a ruling like this comes down there are always enough of us to shut down the main street of the city and march down it, placards waving. Every window along the way was open, and people leaned out taking photographs with their iPhones. The marchers looked up and photographed them back with their iPhones. This was instant community. iPhones had become wePhones.

The bad thing about living in a bubble like San Francisco is we don’t make those larger connections. When Proposition 8 squeaked to victory, the marriage equality campaign was faulted for not reaching out more to immigrants, to communities of color, to black ministers and Chinese churches. Why were there Yes on 8 ads in Spanish language media? Where were the No on 8 ads? Minutes after the verdict was announced EqualityCalifornia sent out an e-mail blast exhorting its supporters to donate money for the fight ahead. Hopefully they’ll remember these fights are not disconnected.

If the twin judgments show anything it's this. Though the crowd that celebrated Bolton’s decision in Phoenix might look different from the crowd celebrating Walker’s ruling, these are sisters under the skin. As Paterson reminded the crowd, "It’s the same law that gave equality and protection to immigrants in Arizona."

It is the same law. That’s worth remembering. It’s not just a victory for same-sex marriage. Or immigrant rights.

It’s a victory for the law. The same Constitution, and the same amendment, protects all of us. Hopefully the gay community and the immigrant community will remember that in the fight ahead.

Because as the young Asian woman blocked at an intersection in her Grand Cherokee, as the hundreds of marchers passed by, said with a smile, "It’s about time."

And the gray-haired lady, who looked like her mother, sitting next to her, beamed and nodded and gave us the thumbs up.