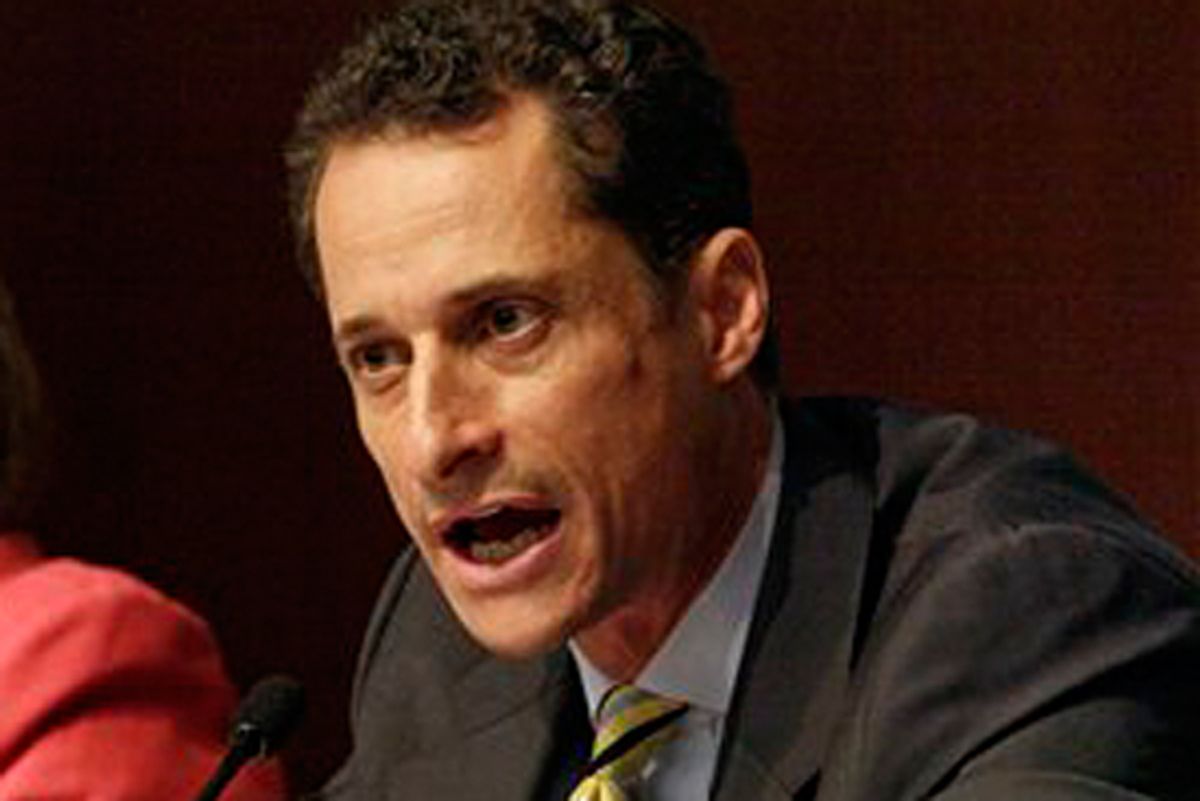 A week ago, I wrote that we shouldn't get too excited about Anthony Weiner. The New York congressman was -- once again -- the toast of MSNBC and lefty blogs for his House floor theatrics (in this instance, he was berating Republicans for complicating efforts to provide healthcare to 9/11 rescue workers). It was tempting, I wrote, to cheer for Weiner -- until you realize that all he's doing is pursuing a very shrewd media strategy designed to position himself for future advancement.

In the days since then, he's reinforced my point with his absolute refusal to shout, speak or even whisper a defense of the "ground zero mosque" as right-wingers demagogued it. Finally, late this afternoon (a Friday afternoon), Weiner released a brief letter that he wrote to New York Mayor Michael Bloomberg (the date says it was penned yesterday). In it, Weiner praises the mayor, who on Tuesday calmed the growing firestorm over the mosque with a brave and unusually stirring defense of it, for putting "this controversial issue in context" -- but stops short of endorsing the project himself. Instead, he writes of his hope that "as this process goes forward," it will be handled with "transparency and tolerance for all viewpoints," and that "fair questions" will be raised.

Yes, ladies and gentlemen, this is the same Anthony Weiner who was being hailed a week ago as a model for courage and candor.

It's not hard to see what's going on here, of course. Weiner, as I noted, still has his eyes on City Hall (the next mayoral election is in 2013). He's spent the last year taking selectively provocative positions in Washington, like embracing single-payer healthcare, as a means of bringing attention to himself. (It worked!) This strategy, which he began pursuing after 11 mostly anonymous years in the House, was the result of an odd predicament: Weiner had been planning to run for mayor in 2009, but was scared off when Bloomberg muscled through a term limits extension and decided to run again. Weiner, of course, didn't want anyone to think he'd been scared off, and pretended he had other reasons for staying out.

But to keep up this ruse, he had to dial back his presence in the New York media/political world in '09. Doing otherwise would prompt questions about why he wasn't running for mayor -- and reminders that he'd chickened out. So, stuck in Washington, he began, for the first time in his House career, to exploit the D.C.-based media possibilities that come with a congressional seat. Hence, his single-payer campaign last year (and his tirade last week).

His defenders claim there's still nobility in this: If a politician is saying and advocating the right things, who cares if he's just trying to get ahead?

But there are two problems with this logic. The first is that Weiner is not a terribly effective or relevant congressman. This is no accident. He's spent most of his House career positioning himself for glory in New York politics, so he hasn't exactly been a legislative workhorse in D.C. His "campaign" for single-payer may have been enjoyable for progressives to watch last summer, but it was irrelevant. He had no pull in the House and couldn't even use his posture as a bargaining chip. Everyone knew what we was doing. The story is the same for his 9/11 healthcare rant last week. The workhorses on that bill were Weiner's fellow Democrats, Jerrold Nadler and Carolyn Maloney. But Weiner's the one who ended up all over television. In other words, Weiner's theatrics are good for Weiner -- but there's no sign that they do anything to help the positions he's advocating.

The bigger problem, though, is that Weiner's "courage" is an act -- as his mosque cowardice makes very clear. None of Weiner's antics in D.C. this past year have done anything to threaten his position for a 2013 mayoral run. In fact, they've only helped: Being saluted on MSNBC has surely improved his reputation with liberals on the Upper West Side and in Brownstone Brooklyn.

But the mosque is a different matter completely. Sure, it polls fairly well with New Yorkers now, and some politicians -- like Bloomberg and Scott Stringer, the Manhattan borough president -- have been out-front in their support. But for Weiner, who enters the '13 race at or near the top of the Democratic field, embracing it would represent a real political gamble. A not-inconsequential chunk of the city's voters are passionately opposed to this project, and deeply suspicious of any leader who'd endorse it. Several media outlets have also gladly fanned the flames -- and will undoubtedly remind their audiences in the years ahead which politicians betrayed them on this issue. For an aspiring mayor, the mosque is a divisive issue to be avoided -- which is exactly what Weiner is doing.

Call it smart politics and smart strategy -- it probably is. But please, for the love of God, stop calling Anthony Weiner courageous.