Why politicians are right not to trust the public 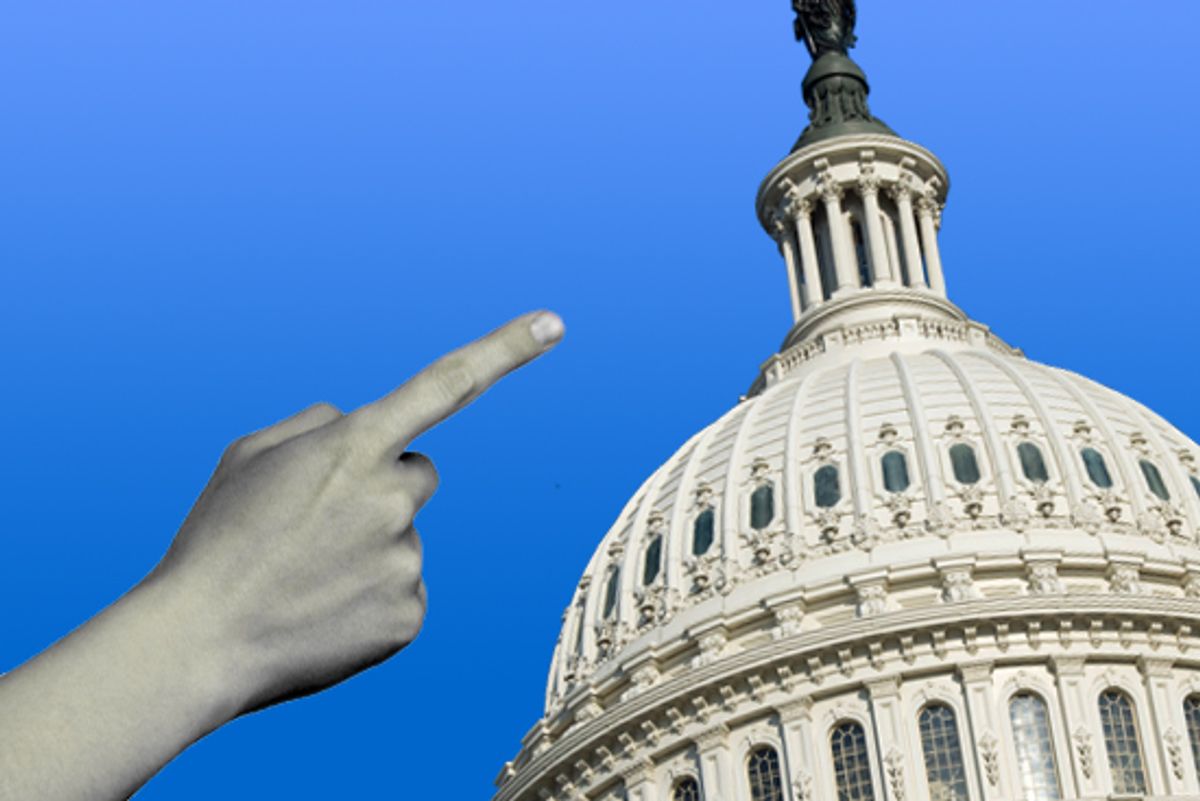 It’s not every day that good politics and good policy align. So you’d think that on the rare occasions they do, politicians would be jumping to take advantage.

For example, if the country was mired in debt and facing deep cuts in social services, and expensive tax cuts passed by an unpopular former president were about to expire, and opinion polls showed that nearly 60 percent of the country favored repealing all or most of them, you might expect members of Congress to be rushing to vow not to let the millionaires of Wall Street get tax breaks while millions of ordinary Americans tighten their belts.

Or, if the country’s deficit was expanding more rapidly than ever, and over half of discretionary spending was allocated to a defense budget that even senior military officials widely agreed was bloated, and polls showed that the public would rather see cuts to defense spending than education and health, you might think lawmakers would subject the military budget to the same level of scrutiny as any other.

In both cases, you would be wrong.

Republicans’ adherence to their traditional pro-tax cut, pro-defense spending stances in the face of public opinion isn’t so surprising -- though the support for those positions by those who were deficit hawks during the healthcare debate is. But what about Democrats? Based on the polling evidence, opposing Republicans on these issues would seem to be a winning strategy. So why are so few of them willing to suggest that we could stand to trim the Pentagon’s budget?

Some of this, no doubt, is due to the influence of powerful special interests. Gas and oil subsidies, for example, will never be repealed so long as Big Oil has a say in the matter, even now that Big Oil is more reviled than ever. But the real explanation is simpler: Most politicians distrust voters just as much as most voters distrust politicians.

Politicians also know that if given a choice by a pollster, people may choose to cut defense spending and foreign aid over education and health -- but that doesn’t mean they want the military base in their state closed, or the factory in their town to stop making fighter jets. Defense spending cuts, which generally entail the elimination of entire weapons programs or military bases, are often more targeted than cuts in education or health spending, which tend to be more evenly distributed.

Lawmakers are even willing to defy those in the top echelons of military command in order to guard against soft-on-defense charges and the loss of job-providing military facilities. Upon proposing changes to the distribution of funds in the military budget, for example, Defense Secretary Robert Gates -- a Republican holdover, no less -- faced intense criticism. The fact that the overall budget increased didn’t stop some congressmen -- mostly those from states with major weapons production facilities -- from decrying the changes as "drastic defense spending cuts that will weaken our national security" based on "misplaced priorities."

This kind of dubious rhetoric works in part because of regional interests, but also because the majority of people don’t know exactly how much we spend on defense. Polls on spending regularly reveal that a plurality of Americans think foreign aid constitutes the bulk of our budget and think it should be cut, when it's really a tiny fraction of our overall expenditures. Meanwhile, most people think we spend less on defense than we actually do, so it’s not far-fetched to think they’d favor cuts even more strongly if they knew the actual amounts of money involved. At the same time, few civilians have any idea what those funds are paying for, or how changes in the defense budget would actually affect American security. For most people, this is abstract discussion, which makes the political debate less about policy or effectiveness, and more about who is -- and isn't -- committed to defending America.

Of course, no one expects every American to know the details of every policy up for debate. Public opinion is just that -- opinion, not expertise. Yet many lawmakers seem not only to distrust the public’s wonkiness, but to distrust people to honestly express their priorities. Rather than take polls as a sign that people are ready for an honest debate about changes in spending and risk the possibility that they’re not, it’s easier for politicians to find other budgets to cut -- budgets for programs aimed at helping some of the most vulnerable and least powerful members of society, like food stamps.

But there’s only so much we can cut from discretionary programs. There's just no way to balance the budget without tackling our unsustainable military expenditures and a tax system that's skewed for the benefit of the wealthy. Politicians may be right not to trust the people. But while that can help them win elections, it only makes our problems worse.