One man's constitutional rights are trampled, and thousands of fans cheer 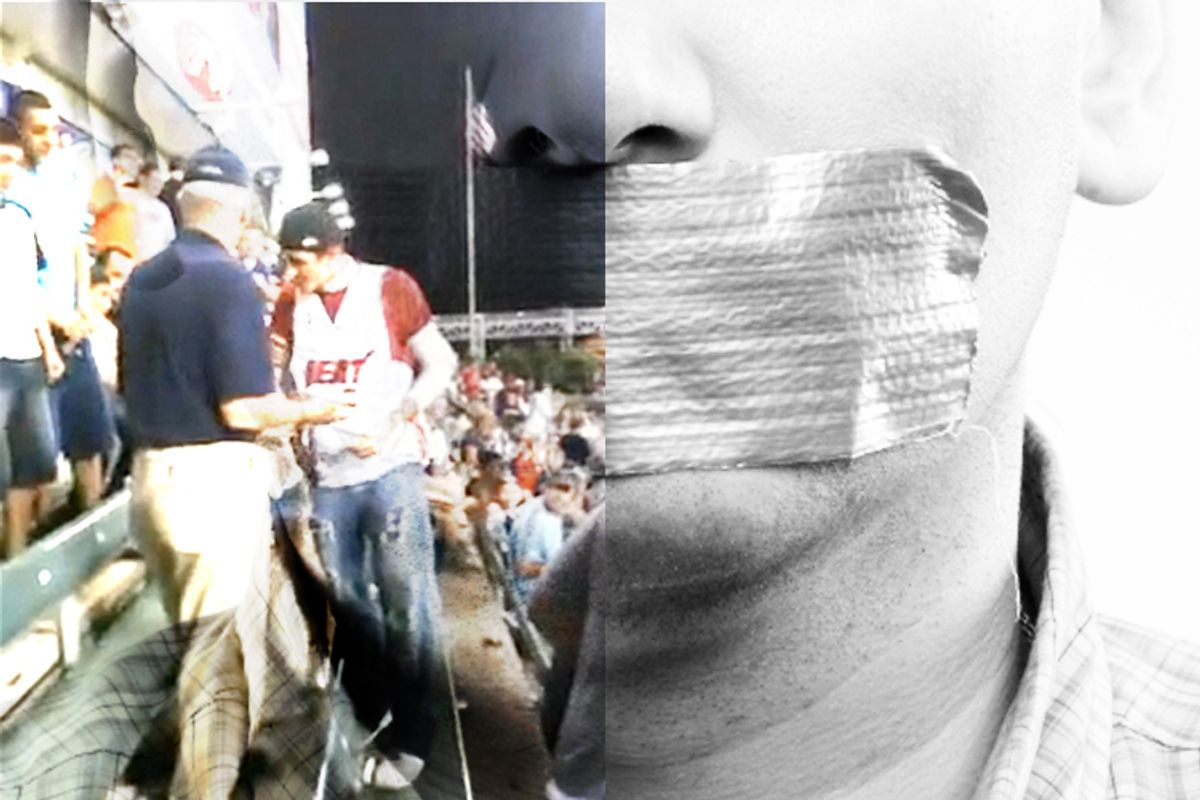 One thing you can confidently say about 21st-century America is this: Our icons of seemingly frivolous spectacle often embody deeply significant and disturbing truths. What was Balloon Boy but a deadly serious commentary on national gullibility and misplaced priorities? What was Joe the Plumber but a fun-house reflection of our destructive deification of ignorance? And what was Matt Bellamy last week other than proof that much of our country could care less about its Constitution?

The instantly famous image of police removing the 29-year-old from Cleveland's Progressive Field was largely presented by the media as hilarious and justified — and the predictable applause, blog comments, talk-radio calls and Facebook posts embraced that portrayal. Bellamy, the logic went, deserved to be tossed because he was wearing LeBron James' new Miami Heat jersey in the city that James deserted. And not only was Bellamy wearing the jersey, he dared to flaunt it by pointing at it, prompting boos from fans and physical assault via projectile foodstuffs. In response, police say they ejected Bellamy for his own safety.

Before you chime in with a fist-pumping "Good riddance!" remember that Progressive Field is not some private club — the taxpayer subsidies that built the stadium effectively make it a public space, ostensibly subjecting it to the Constitution. Also remember that police officers, as taxpayer-funded instruments of state power, are sworn to uphold that Constitution — and specifically, the First Amendment's requirement that the state refrain from "abridging the freedom of speech." And remember, too, that Bellamy's jersey didn't run afoul of the few court-authorized exemptions from the First Amendment — it didn't, say, violate obscenity statutes or endorse violence.

So while Bellamy was undoubtedly being provocative, that's his constitutional prerogative — one that the police officers were obligated to protect. Instead, they removed him, to wild applause, making this event perfectly illustrative of a nation that, for all its pro-Constitution rhetoric, increasingly ignores its founding document.

The First Amendment, after all, doesn't say you have the freedom to say only things that others approve of (or, in this case, wear jerseys that the hometown crowd likes). Nor does it say that, despite your right to free speech, fellow citizens have an equal right to physically assault you if they don't like what you are saying. It doesn't say these things because the framers knew that if government restricts speech on the basis of content, freedom ceases to exist. They also knew that freedom of speech can survive only when government intervenes to defend — rather than silence — speech.

But in an America that has largely succumbed to the stadium-mob mentality, those are apparently outdated notions — even beyond the ballpark walls. This is a country that didn't flinch when the Bush government's spokesperson warned citizens to "watch what they say" — just as we didn't flinch when the Obama government's mouthpiece menacingly told Americans to be "exceedingly careful" with their speech. During the 2004 election season, few noticed USA Today's report that "dozens of people" were "banished from or arrested at Bush political rallies," many "simply for holding signs or wearing clothing that expressed opposition to the war and administration policies." In most election campaigns since, just as few citizens seem to care that authorities now confine party convention protesters to "free speech zones" — the implication being that there is no First Amendment outside the police-designated cage.

Simply put, we are a country that no longer expresses the outrage that Bellamy rightly voiced after he was ejected from the game.

His anger is warranted. Our silence and cheers speak volumes.