"The Colony": "Survivor" meets the apocalypse 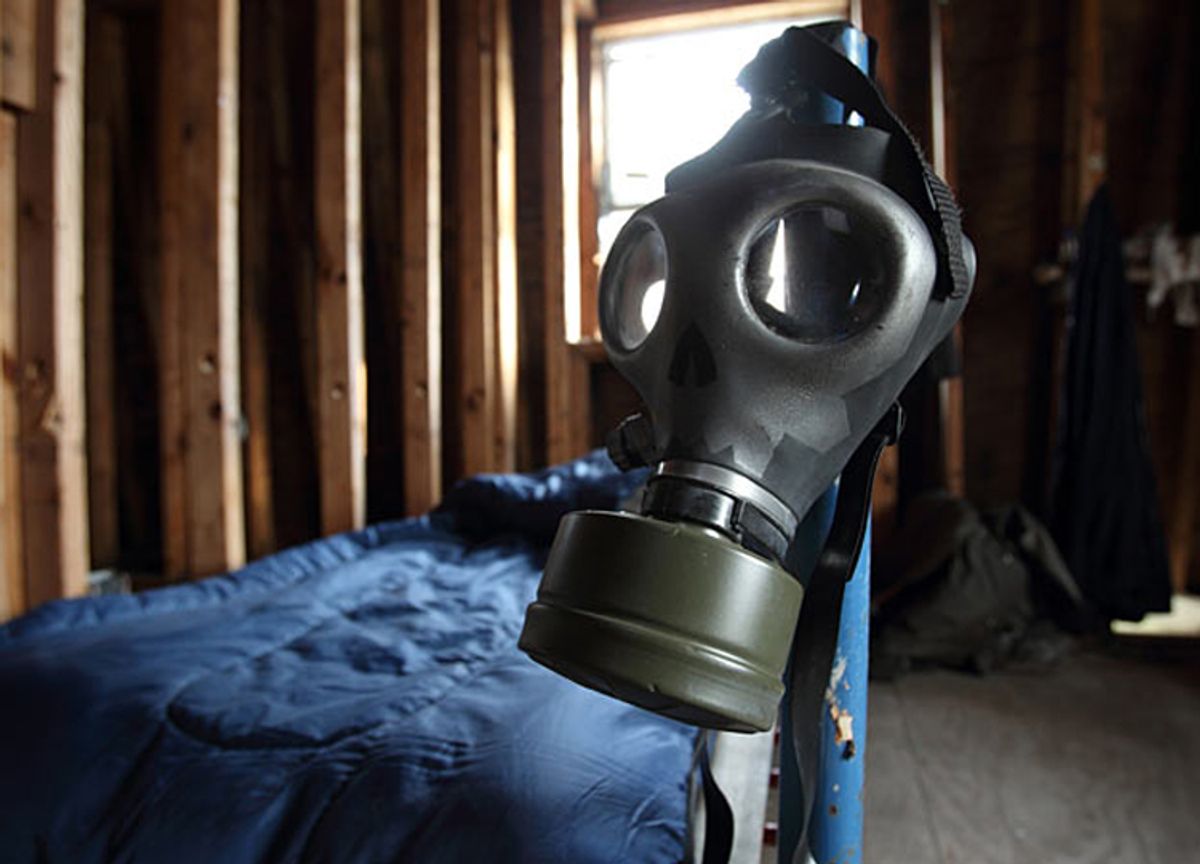 CHALMETTE, LA - MAY 10: Cast photos shot on set for the Discovery Channel show The Colony Season 2 on May 10, 2010 in Chalmette, Louisiana. (Photo by Chris Graythen/Getty Images for Discovery Communications LLC) (Chris Graythen)
--

The apocalypse is going to be awesome, don't you think? What could be more exciting than watching the whole world go up in flames on the evening news?

Oh yeah, we probably won't have any electricity or TV reception. But there'll be plenty of other things to look forward to, like setting our favorite furniture on fire just to boil drinking water, or tirelessly working to create an ant-free perimeter around our dilapidated huts, or teaching our dogs to catch squirrels and bring them back, maimed but not eaten.

I can really see myself thriving under apocalyptic conditions. I bet I'll have a great attitude about the whole thing! I bet I'll get really creative with maimed-squirrel cuisine, and people will come from blocks around just to sample my Squirrel Cacciatore ...

And to club me over the head with a bat, steal all of my food and water, and kill and eat my two dogs. That's the one thing about the apocalypse I'm not looking forward to: getting murdered by my hungry next-door neighbors.

If you, too, have found yourself daydreaming about the apocalypse -- and Christ, who hasn't? -- you may want to catch up with Discovery's "The Colony" (10 p.m. Tuesdays ), a truly bizarre reality experiment that attempts to re-create all of the thrills and spills of the post-apocalyptic experience. Sadly, instead of the lighthearted romp you'd expect, "The Colony" may be the single bleakest reality show ever. We're talking about the fallout of a global pandemic and the end of life on Earth as we know it -- so where are all the laughs? And unlike other reality shows, no one mouths off or cheers each other on or sings moving renditions of "And I Am Telling You," or even solves gigantic puzzles. No. "The Colony" is to "Survivor" what "The Shining" is to "The Sound of Music."

The dreariness begins with the setting: 10 acres of rundown buildings on the Gulf Coast that were abandoned in the wake of Hurricane Katrina. Something about being surrounded by empty, ramshackle structures and piles of wood and trash really seems to set a person on edge -- particularly when that person has no access to electricity or running water. (Man, I always pictured myself, post-Armageddon, heating up Vienna sausages in my grassy backyard.) Throw in an exhausting daily slog -- fetching buckets of soupy water out of a stagnant canal, sifting through big heaps of trash in the swampy heat to search for useful tools, attempting to sleep on creaky cots inside a leaky old building -- you've got a situation that's sure to erode the sanity of even the calmest colonist.

Incredibly enough, the sorry living conditions don't unnerve the colonists at first, although naturally they've been chosen largely for their toughness, ingenuity and resilience in the face of difficulties, from the 28-year-old mechanic, Sally, who quickly demonstrates how to start a fire from an old car battery, to the 70-year-old retired construction worker, Robert, who tirelessly casts a makeshift net into the canal in the hopes of catching some fish. Even when the group discovers a big snake that they believe is poisonous in their sleeping quarters (it's actually non-venomous), they don't panic (aside from some shrieking when they're chopping the thing to bits).

Finally, though, it's the hostile intruders – yes, those murderous next-door neighbors – who cause the colonists to come undone. In the show's second-season premiere last Tuesday, three intruders show up in surgical masks, demanding food and water. The group gives them some milk, then tells them to get lost. "Whatever you do, don't come back at night," says Robert.

The next day, things are even worse: A major herd of intruders comes back, led by the guy who was shoved. Instead of waiting around for offerings from the group, the herd throws smoke bombs and nails a few of the participants in the eyes with pepper spray. Eventually the building where they're living is invaded. Sian, a 35-year-old geology professor, hits one intruder in the knees with a big metal rod to keep her from snatching their medical supplies. George, a 46-year-old artist and inventor from San Diego, gets in a scrap with another intruder and ends up with pepper-sprayed eyes and a bump on the head. The intruders end up making off with a bunch of the colonists' big coolers, which they were using for catching rain.

This is when the viewers at home start to ask themselves, "How does Discovery not get sued for staging these insane fights?" And look, if you're wondering about legal issues? That means it's good TV.

Along with hostile intruders, the colonists have to deal with some unpleasant discoveries. Two of the colonists discover a truck full of rotting pig carcasses being eaten by maggots. Jim goes back to the truck with Reno, excited about using the pigs for fish bait. "How do we get these out of here?" the two ask each other, in between vomiting all over their shoes. After a while, the two decide that hauling maggot-covered flesh around isn't worth it. Somehow, we sense that growing desperation will change this picture considerably.

Sure enough, in the second episode, as the colonists' batteries start to run low and they can't run their power tools – which means they can't secure their camp against intruders -- the team decides they can use the rotting pigs to render animal fat into oil, which they'll use to run their generator. They return to the truck in makeshift plastic aprons and, engulfed in a swarm of flies, struggle to pull one big maggot-infested hunk of rotting meat after another onto a boat trailer.

"I cannot get it out of my nose," says Reno afterward. "It's horrible, absolutely horrible."

There are plenty of clashes within the colonists' camp, of course. In the first episode, many of them seem to think George is lazy. In the second episode, behaving true to type, 22-year-old model Becka decides to try to wash her hair using a bottle of something "bubbly" she found in an abandoned car. "In disaster situations, people often refuse to accept the reality of their new conditions," says psychologist Miatta Snetter, one of the experts who flash on our screens to explain the madness unfolding before us.

Not surprisingly, Becka's hair-washing doesn't make the other colonists that happy. "We shouldn't be using our filtered water," says Sian. "It's just not right because our drinking water if far more precious than hair looking nice."

But personality clashes are not the main event here, and despite the intolerable living conditions, we're treated to plenty of impressive feats along the way. Jim quickly builds a little bridge across the canal without ever getting his feet wet or risking getting bitten by an alligator. Sally, Reno and George create a generator using spare car and tractor parts. Just watching Sally explain her plan taught me more about the mechanics of engines and generators than I'd ever known before. By the time the group actually succeeds in recharging their batteries and power tools using rendered pig fat, I can hardly believe it. The idea to render the pigs seemed totally ludicrous at first; seeing it actually work was truly memorable.

Nonetheless, this isn't a science program. Soon, more intruders will be back, and there's no telling how the colonists will manage to fend them off. For every smart, collaborative problem-solving breakthrough the colonists manage to achieve, there are dozens of opportunities for merciless intruders to steal everything they have, including the machines they've worked so hard to create.

"The Colony" is about much more than sustenance and survival, in other words. Ultimately, the show is focused on far more important things – namely, insuring that every last one of the participants in this experiment either loses his or her mind completely or emerges with such terrible psychological scars that the mere sight of, say, a surgical mask sends him or her into a PTSD-induced catatonic state. And let's face it, when it comes to the subtextual mission of a TV show, it really doesn't get any loftier than that.

Our Picks Television The Colony Tv