Sarah Palin and the age of tweetalism 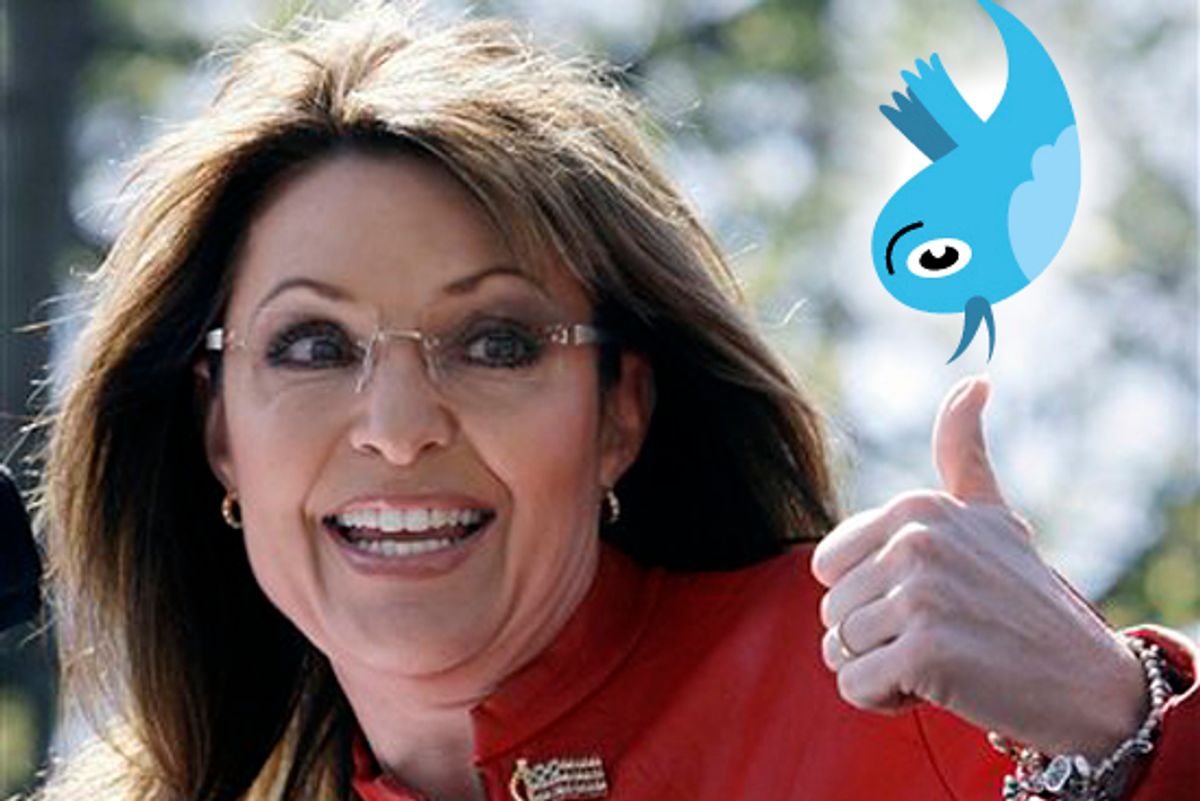 FILE - In this April 14, 2010 file photo, Sarah Palin flashes a thumbs up towards her husband Todd as she begins to address a crowd during a stop of the Tea Party Express on Boston Common in Boston. After months of requests from reporters, a California university on Friday, June 18, 2010 agreed to allow members of the media to attend a fundraiser next week featuring Sarah Palin. (AP Photo/Charles Krupa, File) (Charles Krupa)
--

It’s not exactly a shocker that Sarah Palin loves to tweet. Indeed, Twitter seems to have been invented expressly for the former Alaska governor, a public figure whose prodigious need for attention is matched only by her microscopic attention span.

What’s surprising is how enthusiastically Palin’s tweets are covered as news. She’s become the avatar of a new breed of quasi-journalism. Call it tweetalism.

Consider the "story" the Associated Press sent out on its wires just last week. The headline read, "Sarah Palin Hits Obama for 'View' Appearance." The sole source for this item was a Palin tweet in which she complained that the president should be visiting our "porous US/Mexican border" rather than gabbing with the hosts of a popular daytime chatfest. The item ran in hundreds of media outlets.

Just a week earlier, Palin scored massive coverage by exhorting New Yorkers, via Twitter, to "refudiate" the plan to build a Muslim center near ground zero.

If you want to understand how severely the Fourth Estate has degraded its own mission, the rise of tweetalism should serve as Exhibit A.

Palin has every right — even an obligation, as a possible presidential candidate — to critique Obama’s positions on vital issues such as immigration. But her tweets don’t do that. On the contrary, they offer up talking points meant to shift the focus from an honest debate of policy to public recrimination.

It’s certainly possible that a legitimate news organization such as the Associated Press might use a Palin tweet as a pretext to question the presumptive candidate about her own positions. But that’s not how tweetalism works. It’s a genre of coverage created by, and slavishly obedient to, the sound bite.

The only real "news" in the AP story about Palin’s "View" tweet — delivered via spokesperson, natch — is that Palin plans to visit the border "in the near future."

If I seem to be picking on Palin, let me assure you I’m not. It’s abundantly clear at this point that she’s essentially a brand posing as a candidate. And thus, it’s her job — as American’s premier brandidate — to suck up as much media oxygen as she can. The question for reporters and editors is this: What has she done to deserve attention?

If Palin can hijack a news cycle by taking 30 seconds to thumb out an incendiary broadside from her BlackBerry, why should she — or her fellow political aspirants — bother to develop a coherent and detailed stance on immigration reform, or any other issue for that matter?

More to the point, why should she bother to tell the truth?

Back in August 2009, Palin posted an update on her Facebook page in which she fretted that "my baby with Down Syndrome will have to stand in front of Obama’s 'death panel.'" As might be expected when a national politician suggests that a government reform will kill handicapped infants, the media went sort of wild.

She reiterated the "death panel" claim via Twitter a few months later, well after it had been exposed as a canard.

And yet, remarkably, she was never asked by any reporter to present the legislative language in question, let alone a remedy to this presumed horror.

Such is the central precept of tweetalism, which privileges the stimulative effects of propaganda over the dull mutterings of objective truth.

Why, then, is tweetalism all the rage?

For starters, because it reflects the so-called old media’s infatuation with new media — that exalted realm where all the kids (and ad revenue) reside — as well as their own institutional insecurity.

One need look no further than CNN to see this dynamic in operation. The network, which once placed its trust in solid on-the-scene reporting, now showcases whiz-bang technology. Rather than send a journalist into the breach, they attempt to win loyalty by broadcasting instant messages from viewers.

Tweetalism also feeds off the frantic metabolism of the 24-hour news cycle. The very invocation of the term "Twitter" suggests speed and immediacy, something "just breaking," something sure to titillate without bogging anyone down.

But tweetalism also reflects a more fundamental shift in the media’s self-perception. Editors and reporters once viewed themselves as performing a public service. They were the people's representatives in Washington, the folks who asked inconvenient questions of those in power, who enforced a common-sense morality visible to the average citizen. They were also the means by which a citizen came to understand how the elected representatives were serving society.

But the reporters and editors whose job was to focus on governance have been replaced by an army of pundits, pollsters and political gossips. Politics has become just another entertainment option, covered as a form of athletic combat, or a kind of national reality TV show. Why else would Obama’s appearance on a daytime TV show merit coverage in the first place?

This country has always had a tradition of tabloid journalism, of course. But the rise of tweetalism marks the normalizing of tabloid impulses.

Reportage was once intended, ultimately, to reassure citizens by equipping them with knowledge. The idea these days is to keep readers (or listeners or, most often, viewers) in a state of constant agitation, to excite within them a perpetual grievance and rage.

And it’s not just the right-wing media that plays this game, or the stalwarts of the so-called mainstream media. The progressive media has likewise embraced tweetalism. Instead of devoting resources to reporting real stories, too often it wastes space reviling — and ultimately aggrandizing — figures such as Palin.

Tweetalism arises from and thrives within a media environment that is at once passive and hysterical, bent not on illumination but on the generation of controversy.

In some sense, tweetalism is the natural result of information age. Rather than face the reams of cold, hard data about the true nature of our global predicament, we have chosen to live inside a bubble of overheated opinion.

Unless we, as citizens, choose to turn away from histrionic figures like Palin, our for-profit media will continue to treat their electronic eructations as fresh news. The American empire will end not with a bang, but a tweet.