"Mad Men" recap: A man in a room with a checkbook

Dick Whitman visits his only friend, then Don Draper turns his back on her 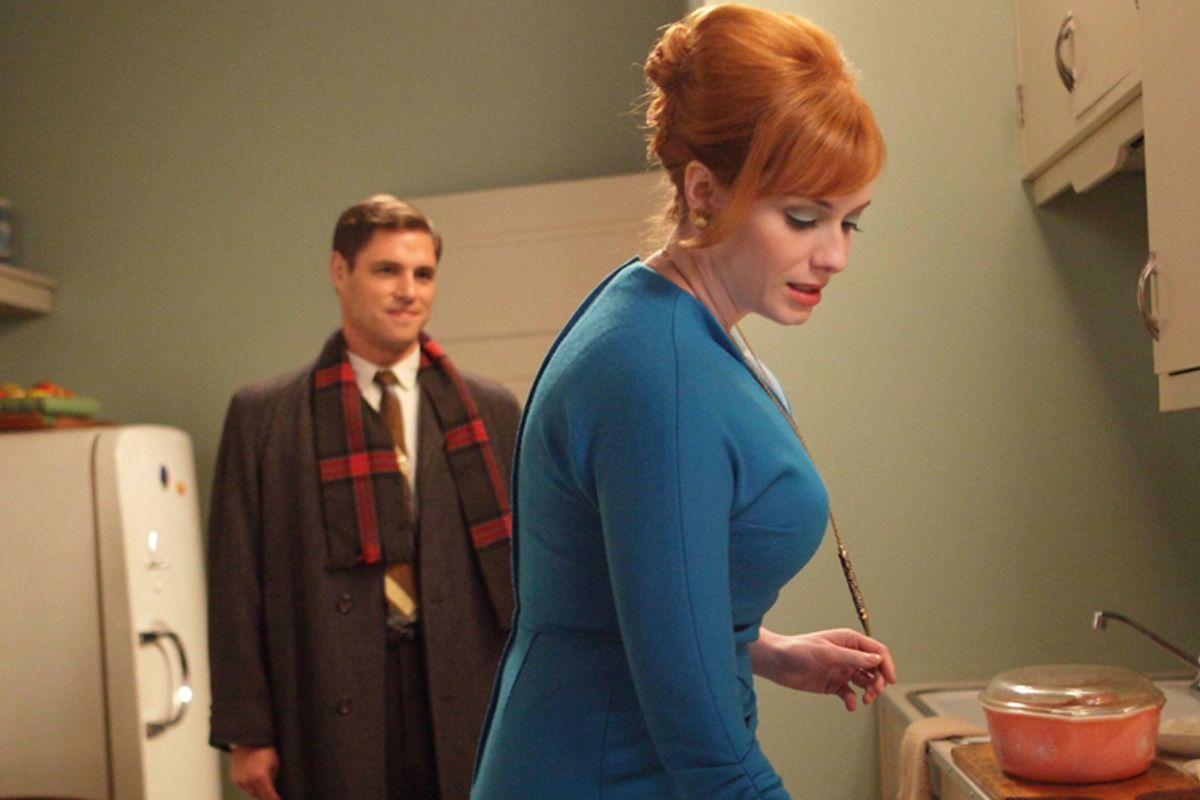 "I could tell the minute she saw who I really was, she never wanted to look at me again. Which is why I never told her." When "Mad Men's" Don Draper (Jon Hamm) describes his ex-wife Betty's reaction to his real identity in a conversation with his longtime friend and ally Anna (Melinda Page Hamilton), at first it's easy to feel sorry for him. Maybe Betty (January Jones) was as disgusted with his working-class identity as he claims.

But as the story progresses, as we watch Don fall into all of his old patterns, even hitting on Anna's niece despite the countless reasons not to (you have to love the way he's made to look unusually old and awkward in that scene), we start to wonder if Don's running narrative reflects his own self-loathing more than anything else. When you see who I really am, Don keeps reminding everyone, you'll never want to see me again.

And maybe he's right about that. Remember Rachel (Maggie Siff), his lover from the first season who, when she saw that he was willing to leave his wife and children for her, became disgusted and asked, "Who are you?" And now even his secretary, Allison (Alexa Alemanni), looks at him with a strange sort of pity in her eyes -- whether or not she ever had any feelings for him (and our best guess now is that she never did), his utterly cold mishandling of their tryst enlightened her about the kind of man he really is.

Just in case we're wondering if Don is as bad as he sometimes seems, here's proof: The guy can't even tell his one real friend in the world, the one person he's always been honest with, that she's dying. Yes, it should be obvious to him that Anna would want to know. 1) Anna cares about the truth. "I started thinking of everything I was sure was true," she tells Don, "and how flimsy it all might be." (Don, of course, tells her that this fixation on the truth isn't "a great way to think about things.") 2) Anna tells him that she dislikes her sister (who doesn't want to tell her that she's dying of cancer), and says that, if it weren't for her niece, she and her sister "would've killed each other by now." 3) Anna has always been honest with Don and accepted his many flaws over the years, and she would have told him the truth if roles were reversed. "I know everything about you, and I still love you," she tells him.

And how does Anna feel about lies? "A patch of new paint's just as bad as a stain," she says of Don's paint job on her wall, but she might as well be talking about an attempt to make a bad situation better by blotting it out.

Finally, Don is about to tell her, but he stops. Because, while Anna might be capable of loving someone and standing by them, no matter what, Don isn't. He simply can’t stand to be the one person who's there for her. He can't handle the intensity of the situation, and refuses to help her through whatever comes next. Like her sister, Don may tell himself there's no point to letting Anna know, but ultimately he's just being selfish.

Even when he tells her he's going to Acapulco -- here come the lies, to the one person he's never lied to -- she's fine with it. "I want you to do everything you want to do," Anna says, the unconditionally loving mother he never had. Incredible, that Don is capable of turning his back on the one ray of light in his whole bleak life.

Funny how, just when things seem like they might be a little bit upbeat for once – convertibles driving down the PCH! Jukeboxes! Grass, baby! – everything goes to hell in seconds. The way Don's character is presented to us reminds me so much of Tony Soprano. The second we start to think he might be human, we're offered a glimpse of the void where his heart should be.

Of course, we were treated to the opposite sort of revelation this episode with Joan's (Christina Hendricks) monster of a husband, Greg (Sam Page). Just as it looks like Joan's entire future will be on hold until Greg gets back from Vietnam – and who even knows when he'll go? – we're offered a touching scene where Joan cuts her hand and Greg sews her up. Since this may be the one situation where Greg isn't a hapless jerk, it's clearer why Joan feels like it's her wifely duty to let him follow his dreams. If only he could become a surgeon without ruining our little Joanie's life in the process.

Joan's brief exchange with Peggy (Elisabeth Moss) tells us a lot about how high the stakes are for her. Assuming that Peggy will be alone on New Year's, she's alarmed to discover that Peggy will be spending it with her boyfriend. It's fine with Joan if Peggy has a great career and no husband, but if hapless, naive Peggy gets everything and Joan ends up with nothing? Inconceivable! And why shouldn't Joan feel outraged? Joan may be the only character on "Mad Men" who has a big heart but who is also a pragmatist. For Joan to be practical (ditching the married guy and marrying a doctor) and loyal to a fault (staying with Greg even though he raped her) and for that to be her downfall? It's pretty heart-wrenching.

So let's see, you can have no heart at all (Don), let your heart lead you to ruin (Joan) or you can have a heart but have no idea in the world how to use it. That’s where we find Lane Pryce (Jared Harris), a man who can't stand up to his wife, can't make friends and takes his frustration out on everyone in the office. He hounds everyone with numbers – there's not enough money for a real Christmas party, Joan can't take a few days off in January to be with her husband. "Don't go and cry about it," Lane tells Joan, summarizing his dim view of emotional behavior.

"I understand that all men are dizzy and powerless to say 'no' to you, but consider me the incorruptible exception!" Lane tells Joan (but later demonstrates that he's far from incorruptible). This man has no idea how to express himself. The one time he tries to act like a human being -- by sending Joan and his wife flowers -- the deliveries get swapped by accident and his wife winds up with a note that says "Joan, Forgive me." But these are the sorts of mishaps that happen to someone who can't apologize in person. Lane is so passive, he's even willing to lose his wife on what amounts to a technicality. After all, he's obviously not going to call her or fly to London to save his marriage. What are his options? Send her another dozen roses with a note that says, "Rebecca, forgive me"? Being that passive is almost as bad as lying outright -- either way, you're not doing the hard work of putting yourself on the line for the people you love when it's important.

It's fitting, then, that Don and Lane find themselves together at the end of the episode. "You're supposed to tell me to get on a plane," Lane says to Don after relating that his wife refuses to come back to the U.S. "Is that what you want, or is that what people expect of you?" Don replies, but he's only repeating what the female consultant told him in last week's episode. Other than this stolen shred of rhetoric, Don has no advice for Lane.

And so, two men who can't take action end up ringing in the new year the only way they know how: by spending money. They buy dinner, buy entertainment (Gamera!), buy a laugh (watching a comedian at a nightclub), and then buy sex from a couple of prostitutes. No wonder a man like Lane, who's utterly out of touch with his emotions, loves America so much. He can passively experience any emotion he wants to, just by whipping out his wallet.

So we began the episode with Dick Whitman, visiting his dear friend, and end with Don Draper, paying a whore. Remember how Anna's sister told Don, "You're just a man, in a room, with a checkbook"? Basically, she's right. Without the remotest ability to show up for someone else, to withstand the bad times along with the good, Don is just an empty shell -- or, as that reporter put it in the premiere, a cipher. Incredibly, now that Don has nothing to hide, his truth is flimsier than ever.