Did Michelle Obama go on vacation because she hates her husband (and America)? 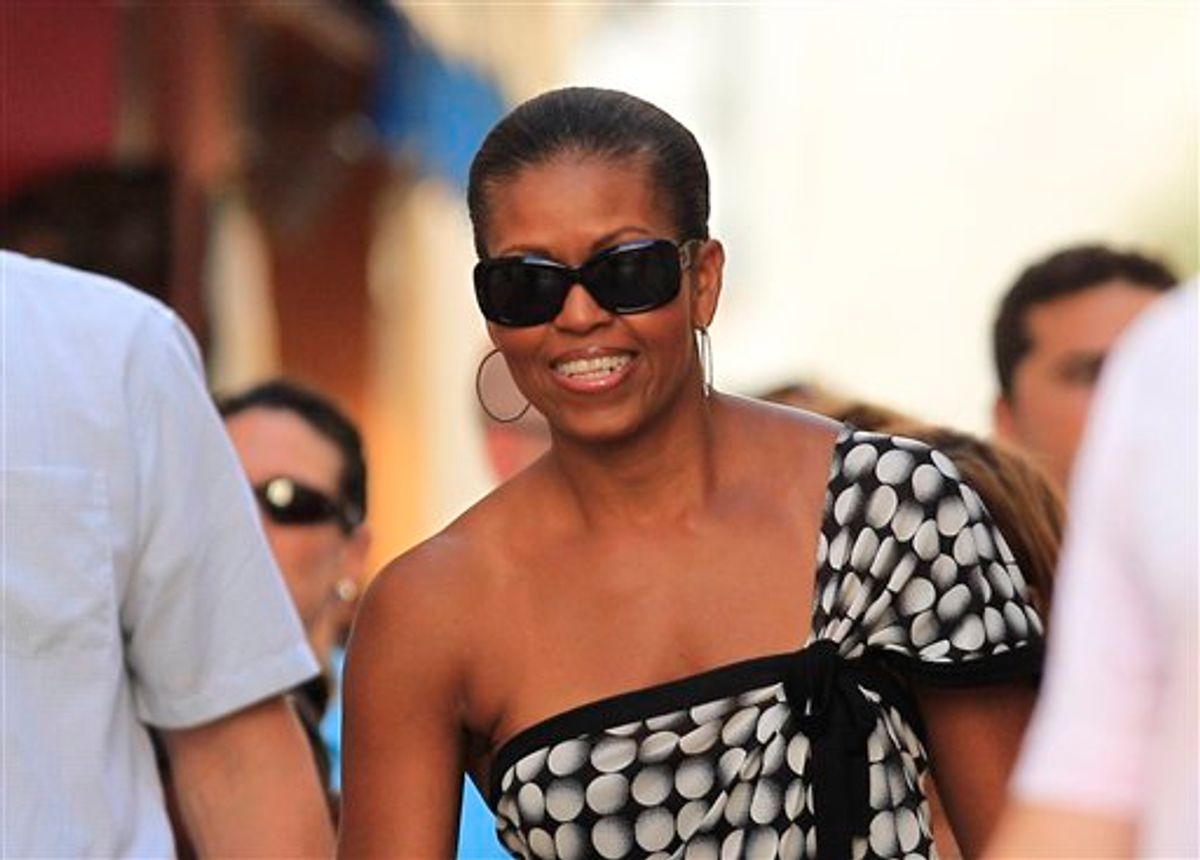 Mickey Kaus, Maureen Dowd and Matt Drudge agree: Attention must be paid to a vacation taken by the president's wife and their young children.

Maureen Dowd wants to know why that terrible Michelle Obama isn't making her husband "toast" and martinis instead of jetting around the world cavorting with "a cavalcade of Secret Service agents, friends, children and staff" while he sits around miserably solving all the world's problems. Michelle is "giggling" at her hardworking husband, apparently, instead of giving him foot rubs or whatever wives are supposed to do when their husbands get home. [UPDATE: Obama is "gigging" her husband, apparently, according to Maureen Dowd. I regret, and am somewhat confused by, the error.]

Moving from bizarrely retrograde to outright batshit, we turn to former Slate blogger and current failed Senate candidate Mickey Kaus, who, considering the first lady's utterly unremarkable trip to Spain, postulates "three levels of perception." The "Real Insider," according to Mickey, knows that Michelle Obama's trip ("with her daughter and an expensive posse") means: "Jeez, they must have had some kind of fight. She's pissed! This is a big 'screw you.'" (Women, amirite?)

Mickey Kaus is not personally saying that Michelle Obama left Barack Obama alone on his birthday because they're fighting! He is just saying that there are ways of perceiving her decision to do so that imply that it was a slight of some kind, due, most likely, to their fighting. (Claiming that baseless speculation is merely an analysis of how various other people will "perceive" some piece of news that had no deeper meaning until it was imbued with one by people like Mickey Kaus allows Kaus to pretend that he is not engaging in baseless speculation.)

Then, of course, Matt Drudge jumped in with, like, five headlines, calling Michelle Obama Marie Antoinette, and claiming the trip was costing taxpayers $75,000 a day. (Heavens!)

The facts are: Michelle Obama only brought along Sasha and two friends (and their kids), both of whom paid for their own lodging. The government was remimbursed for the equivalent of the airfare.

And, as Ana Marie Cox pointed out, "first lady" is not a job. Michelle Obama doesn't have actual responsibilities, so she can just do what she wants. (Unless you are Maureen Dowd, modern woman, who seems to think it is Michelle Obama's job to bring her husband martinis when he is done with work.)

So it's barely costing taxpayers any more than it costs them to protect the first family when they're at home, or anywhere else in the nation, and no one involved in the trip is slacking on their important duties back in D.C. All that leaves conservative critics (and bored late-summer cable anchors) with is outrage over the fact that Barack Obama didn't spend his birthday with his wife. (And half of these people don't even believe it's his birthday!)

(What the right wing is actually doing is just getting liberals back for those jokes about Bush's vacations that everyone so enjoyed making, back when he was on vacation more often than any other president in history. Conservatives always thought that was an unfair attack, and so therefore it is fair to lob it against Obama.)