"Off the Grid": The growing appeal of going off the grid

A rising number of Americans -- political extremists and normal folks -- are living without gas, phones or power 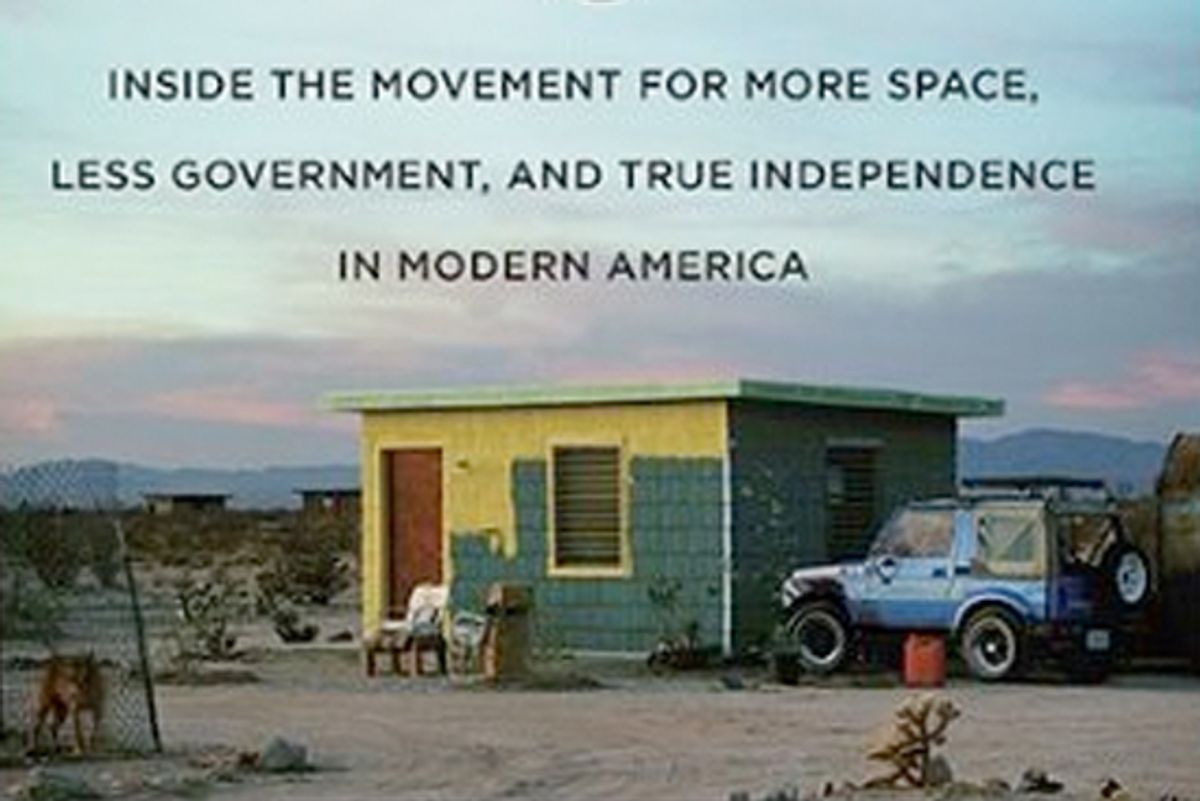 For most Americans, tap water, electricity and heating are not only staples of modern convenience -- they're absolute necessities. A small but growing number of Americans, however, have ditched the comfort and convenience of their utilities and chosen instead to live off the grid -- unconnected to gas, water, phone and power networks, and, in some cases, making their life from whatever they can grow or hunt on the land. In 2009, British journalist and documentary filmmaker Nick Rosen traveled around the United States visiting these unplugged Americans to find out what it means to live an off-the-grid life.

He discovered something unexpected: Living off the grid may be a fringe activity, but it’s not restricted to any one fringe. America’s off-gridders are pot farmers and 9/11 truthers, committed environmentalists who grow their own food and libertarians living out of their cars, old school horse-and-buggy Mennonites and hypermodern owners of "earthships" (eco-conscious houses made of dirt-filled tires). They live in towns, on farms, 100 miles from the reach of another human being. They work -- or don’t. Pay taxes -- or not. But all of them are committed to a simple goal, living without dependence on utility providers.

Rosen chronicles his trip -- and the quirky cast of characters he met along the way -- in a new book, "Off the Grid: Inside the Movement for More Space, Less Government, and True Independence in Modern America." Although the book tends toward heavy-handed commentary, it also provides a detailed look at a population and a lifestyle we rarely hear much about (though that, of course, is generally the way they prefer it).

Salon talked to Rosen about where the grid came from, off-the-grid living's bipartisan appeal and why it's becoming more and more popular.

What exactly does living off the grid entail?

Largely it means moving away from the fixed utility grid -- electricity, gas, water, cable, land-line phones. But the thing is, living off the grid is not some sort of a game where you have to be completely pure in the way you do it or else it doesn’t count. It’s a lifestyle choice, and one that also has a metaphorical significance: You’re living outside corporate America, whether that means credit cards or supermarkets or gas stations or whatever. It’s about moving away from that system, physically and mentally.

You’re British. So why write about off-gridders in the U.S. instead of in the U.K.?

Well, I’ve written about off-grid life in England, where I live, but there it is really a fringe minority doing it. But the idea of off-the-grid living actually seems really integral to American society, because of the size of the country and the pioneering spirit that’s so much a part of your national culture. It just felt to me like America, of all the places in the developed world, is the place where off-the-grid life could, and to some degree already has, taken off. I myself want to live in an off-grid community eventually and so I decided I would travel across America to see how it was done.

How did we get so attached to the grid to begin with?

That’s a good question, and the first thing I should say is that the grid is an amazing technological achievement, but it’s organized entirely for the benefit of the corporations that run it. That mentality started with Thomas Edison. When he began marketing electricity for the first time, he started out charging by the number of lights people used, instead of the electricity itself. But very quickly he changed his business model and began metering the electricity because he saw that was the best way to make money. Of course, the moment that the companies starting selling electricity rather than light, they had every incentive to encourage their customers to be as energy inefficient as possible because the more power they squandered, the more power was made for the utility companies. That really has been the model ever since.

G.E. and other corporations like it also pioneered the early model of centralizing electrical power. In order to organize it most simply for themselves, they had a very small number of locations where power was produced, and then it was transported very long distances, very inefficiently, in order to be sold to the customers. And very few people have thought to question that system until quite recently.

So what is the solution to the problem of the grid?

Actually, I don’t have a solution. All I really want to do is remind people that they have the option to go off the grid. I’m not saying they ought to do it, I’m just saying that they should be aware that they can. The technology is there, the knowledge is there. It’s a very comfortable choice. You don’t have to go back to the Stone Age to do it, and it could solve a lot of problems for a lot of people. It can be simpler, more ecological and cost much, much less than traditional living.

And, of course, it’s a way of sticking your finger up at the establishment, and a lot of people get satisfaction just for that reason. I think it’s very good for society at large to have a lot of people living off the grid, because it increases the resilience of the people as a whole when you have this large subset not dependent on centralized power of various kinds.

Something that's strange about off-grid living is the way it crosses the political spectrum. You have incredibly liberal people doing it for environmental reasons and incredibly conservative people doing it to escape the clutches of government, and lots of people who fall in between those extremes. What is it about this lifestyle that brings together these groups of people who we tend to think of as incredibly different?

It’s about freedom. It’s a desire to get out from under the thumb of corporate America. You look around for things that you can do to make your world a better place and as an environmentalist, everything that's green is likely to be greenwashed. Every corporation seems to be telling us that we can be green if we use their product and deep down we know it’s nonsense. But living off the grid has not yet been colonized by the corporations, which is something that makes it very attractive to a wide spectrum of people.

But it’s also true that most people who live off the grid in the U.S. are white.

Yes. It’s because it’s largely a rural phenomenon. It needn’t be, but it still is largely. And large parts of rural America are still very white, because when non-white people turn up they get frozen back out again. There are some notable exceptions, like a Hispanic off-grid community I met outside Albuquerque, but for the most part it remains a rural and white movement.

You talked to one family living off the grid who had decided to live with as little money as possible, and one of the things that meant is that they wouldn’t send their children to college. So off-the-grid life can come with some pretty significant costs.

Yes, of course there are trade-offs; to some extent by going off the grid you’re pulling away from the system, and that includes education and medicine and entertainment, to take just three examples. But a lot of people would say that they’re better off that way, they’d say that the amount of money that they could spend on their medical bills they could spend instead on preventative medicine and a good diet and exercise and natural remedies. So there are ways to turn it around and say that you’re gaining more than you give up, and that you give up a lot to live on the grid as well.

A lot of people who live off the grid are very apocalyptic about the directions they see the world going in. Did you get the sense that any of them wanted things to fall apart just to be proven right?

Yeah. There are a lot of people who feel that way, although it goes far beyond people who live off the grid. The two main groups who want to see some kind of cataclysmic event are, I think, the environmentalists and the conspiracy theorists. The green people feel that society will just go on destroying the earth until there’s a bad disaster. Until then, other things will take priority. When the economy is bad, people worry more about money or about Grannie’s heart operation -- quite understandably -- than they worry about the state of the planet. Only a huge disaster can really change that. And then the other people, the 9/11 truthers and others like them, they tell me that they want to see a sort of economic implosion because then they’ll be proved right in their theories. But as I said, that’s not just an off-grid phenomenon.

Living off the grid seems like it’s a good idea environmentally. But it’s not as though simply going off the grid automatically makes you green. Even if you’re providing gas and electricity yourself, it’s possible to be very wasteful with those resources.

But even if you’re living off the grid for other reasons, you’ll still have a relatively small footprint simply because you’re just far more aware of nature. You’re working out in the sun, you’re dealing with your own waste. It makes you responsible. The American poet Gary Snyder once said something to the effect of, "find your place on the earth, dig in and take responsibility from there." Living off the grid is like that. It’s very much about being in charge of your own life, empowered, responsible for your own existence, your own waste, and your own energy -- all at a time when the American state seems less and less capable of providing those basic needs that people have traditionally looked to the state to provide.

Do you think off-the-grid living is really on the rise, or are we just starting to notice it more now?

It’s definitely on the rise. It’s happening mainly for two reasons. One is the fact that Americans are falling out of trust with their system, that they’re realizing it can no longer look after them. And the second is that the technology that has risen up has made it possible to live very comfortably off the grid. You can have absolutely everything off the grid that you would want on the grid. The only difference is that you couldn’t run it all at once. So you can have your fridge and your shower and your TV and your stereo and your Internet, but maybe if you want to run the washing machine you’d better turn off the stereo for a couple of hours to conserve your solar or wind energy.

So basically it asks people to think about the way they’re using the energy.

Exactly. You have to have priorities.