At last, Florida newspapers are exploring the checkered history of the man most likely to be elected governor 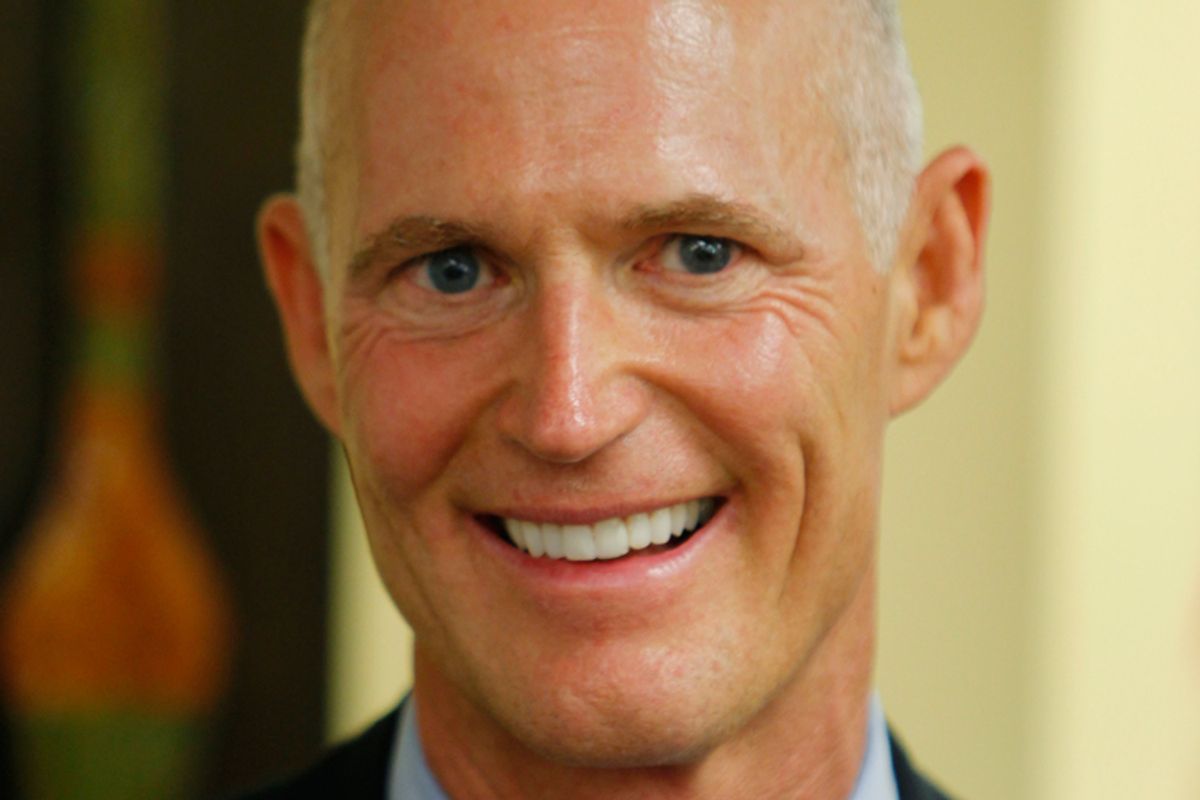 As the Florida primary enters its final weeks, the business practices of Rick Scott, front-runner for the Republican gubernatorial nomination, are at last getting the attention they deserve. A wealthy investor in hospitals and clinics who became a leading antagonist of healthcare reform over the past two decades, the brash, bald Scott somehow escaped scrutiny of his controversial enterprises while he spent millions advertising himself as more "conservative" than Attorney General Bill McCollum.

Now the Miami Herald and  St. Petersburg Times -- and the conservative website Newsmax! -- are reporting on a series of lawsuits against Scott’s chain of profit-making emergency clinics, operated by a company known as Solantic, including a case that involved accusations of fraudulent misuse of a medical license in violation of state law:

Just six days before Rick Scott announced his bid for governor, he was deposed in a case that alleged his health care company, Solantic, broke Florida law by filing false medical licensing information with the state.

But what Scott said April 7 might never become public.

Within a month, Solantic settled the 2-year-old case and signed a confidentiality agreement with Dr. P. Mark Glencross, who claimed his medical license was misused by the Jacksonville-based chain of walk-in clinics. The state has no current or former investigations into Solantic over the licensing issue.

At the same time the case was quietly settled, the Republican front-runner was drawing attention to Solantic on the campaign trail by boasting of his business background and the company's patient-centered, low-cost health care model that provides "Starbucks-style" transparent pricing at nearly 30 clinics in the state.

The Glencross lawsuit and nine other court actions filed against the company since 2001 in Duval County tell a different story. Taken together, they portray the company, and sometimes Scott by extension, as a ruthless employer that discriminated or cut corners in pursuit of profit.

The Herald/Times report is tantalizing, yet far too brief, and is aptly headlined "Few Details Emerge From Suits ..." A much fuller account of the troubling history of Scott's health enterprises -- including the fraud-ridden Columbia/HCA, which entered into one of the largest settlement agreements ever won by the Justice Department -- was published last fall by Salon (in cooperation with the Investigative Fund).

Reporter Tristram Korten’s two-part series on Scott, which appeared months before Scott declared his candidacy, explored the same hiring discrimination and wrongful death lawsuits, in much greater detail. With Scott closing in on his party's nomination, and perhaps the statehouse, it is very much worth revisiting.

In a state as diverse as Florida, Solantic's alleged pattern of prejudicial hiring ought to be a major issue for Scott,  at least if his former managers are to be believed:

From 2003 to 2005, five Solantic supervisors, all working in different clinics, have claimed they were explicitly prevented from hiring people they deemed the most qualified because the candidates were either overweight, too old, Hispanic or black. The supervisors all prepared lawsuits with the same lawyer, claiming they were fired or forced to quit "because they did not want to enforce Solantic's discriminatory practices," as their complaints state. Two employees corroborated specific incidents in their own lawsuits against the company.

Scott himself is a fascinating figure because he embodies the social vision of this year's loudest ideologues: a Tea Party nation where unbridled corporate avarice "solves" every problem, including medical care for the uninsured. What he thinks they need, as a doctor who sued Scott told Korten, are clinics that can be run like a fast-food restaurant (Scott likes to mention Starbucks, but McDonald's is more like it).

Among the results, aside from the emphasis on "attractive" and "mainstream" employees, was the hiring of at least one doctor who had been disciplined by the state Board of Medicine for violating medical standards in a case that led to a woman's death from deep-vein thrombosis. After the disciplined doctor went to work for Solantic, the family of another female patient sued both the physician and the company, charging that their negligence had led to her death from deep-vein thrombosis as well.

That a businessman with such a checkered record and such extreme views is a favorite candidate for high office reveals much about the current political climate (or at least about the state of Florida), and the condition of media institutions that are supposed to inform democratic decisions.