You might want to think twice before evacuating the way this JetBlue flight attendant did. Those slides are steep! 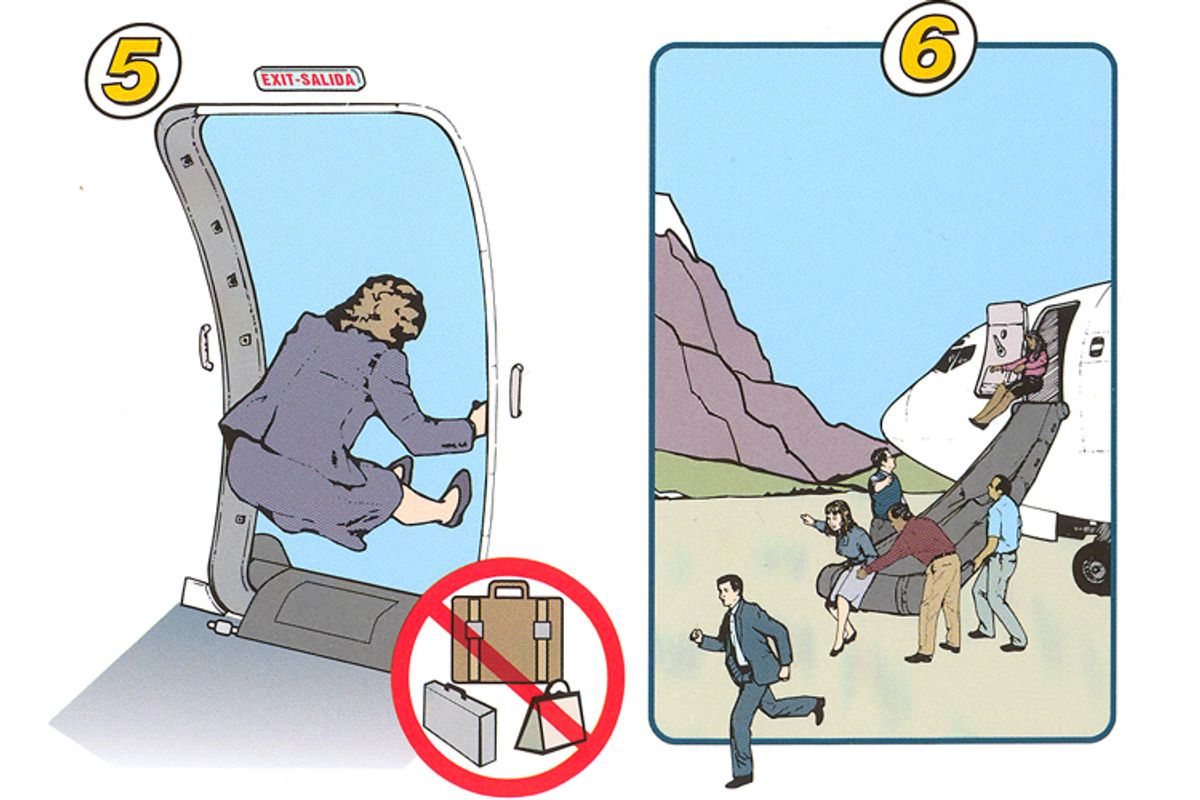 On Monday afternoon, Steven Slater, a 38-year-old JetBlue flight attendant, quit his job at Kennedy Airport by opening a plane's emergency exit and jumping down the escape slide.

Reports claim that as the Embraer ERJ-190 taxied to the gate after landing, a passenger stood up and began pulling his luggage from the overhead bin. When Slater asked the man to be seated, the man refused. Slater approached, and as the man continued removing his bags, one of them inadvertently struck Slater in the head. A "heated exchange" ensued in which the passenger called Slater a "motherfucker."

Slater then walked to the back of the plane, cursed at the man over the public address system and opened a rear exit, automatically deploying the inflatable escape slide. After jumping down the slide, he walked into the terminal and made his way to employee parking, throwing his company necktie to the ground. Then he drove home.

This story can take us in different directions. We could re-explore the growing phenomenon of so-called air rage. Why is it that so many people seem to lose their minds in and around airplanes? And to what extent is this phenomenon the inevitable result of the stresses of flying, from TSA security woes to crowded planes and long delays?

For more on air rage -- its causes and consequences -- see these old columns of mine, here and here.

But the angle I like best is the one of Steven Slater as instant folk hero -- a sort of D.B. Cooper of the peanuts and pretzels set. Hero to the underpaid, overworked flight attendants who regularly endure the wrath -- and occasionally the fists and feet -- of belligerent passengers.

I am not going to dispute that certain flight attendants aren't themselves confrontational and prone to making bad situations worse. And to be clear, I am not condoning what Slater did. Obviously it was over-the-top, hysterical and entirely unprofessional. Just the same, his reaction was many the frazzled flight attendant's fantasy-come-to- life. He pulled off what thousands of others only daydream of doing.

(Or so I imagine, though maybe I ought to mind my own business and keep clear of the entire topic of flight attendants. You might remember the scorching I received in the letters forum after this 2007 column.)

I'm surprised, frankly, that we don't see more of these theatrical exits -- if not by fed-up crew members, then by fed-up passengers. Sooner or later, during one of those multi-hour tarmac marathons, we are going to see a mutiny, with hundreds of people bolting through the exits and down the slides.

So-called self-initiated evacuations have happened before, but these were usually in response to panic. One such incident took place aboard a Delta 757 on the apron in Tampa, Fla. A stampede of frightened passengers made for the exits following a harmless engine compressor stall, refusing to heed flight attendant commands. Two people were seriously hurt.

Don't say I didn't warn you: Those slides are very steep, and in the case of wide-body aircraft they can be two or more stories above the ground. They are designed to get people off the plane as rapidly, not as comfortably, as possible. You stand a fair chance of breaking your leg or ankle, and/or being struck by carry-on bags that people will insist on taking with them, then lose control of once they hit the slide.

Legend has it, by the way, that an Eastern captain once retired by exiting through the rear air-stairs of his Boeing 727 as it languished in a taxi queue.