"True Blood" recap: Making up isn't hard to do

Jessica learns some new moves, Sookie gets attacked (again) and Eric takes off his clothes 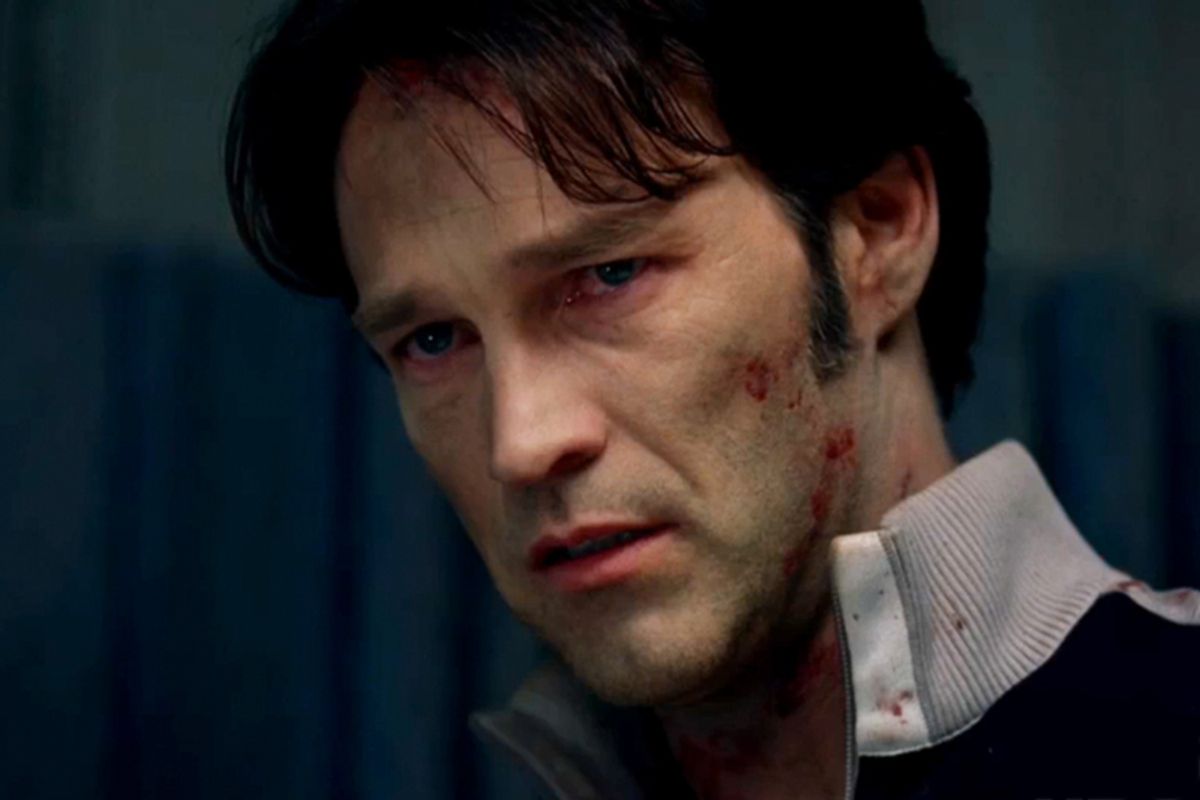 Poor Bill. The moment he started wearing that track suit jacket, I started worrying. His maker is dead. His queen has sold the state of Louisiana and moved into Russell's palace. Sookie has realized that it was nice while it lasted, but now it's over. What's left for him? Even though he's dressed for it, probably not even a supporting role in the Real Housewives of the newly expanded Vampire Kingdom of Mississippi.

Sophie-Anne hates her new room. Not enough space for her birds, although fortunately there seems to be enough room for Hadley. Talbot is, needless to say, not thrilled that Sophie-Anne is there at all. And is even less happy about the news that Russell executed the magister and is trying to make it all better with a half million dollar check in support of the Vampire Rights Amendment.

"You're acting like a century-old child," Talbot whines. "You can't just buy your way out of everything."

"Of course I can," Russell shoots back. "This is America." Indeed it is. Though in America's defense, it has been known to act its age,  like a two-century-old child.

Eric interrupts. "There's a were-bitch in your study." It's Debbie who has come to cry to Russell about that "cunt" Sookie. "But she's a special cunt," Russell explains. And it's nice to see that Debbie is adding a new word to her vocabulary. Russell likes Debbie's "energy" and promises to hunt Sookie down himself. When Talbot  finds out that Russell has to leave again on business, there is a major heirloom-smashing tantrum. Eric calms Talbot down by, basically, promising to fuck him. "I'm positively jealous," says Russell gleefully.

Back in Bon Temps, Bill tries to set Jessica free, but she convinces him she needs him as a teacher. They have a nice Karate Kid moment where they fly around the room and Bill teaches her a bunch of cool vampire martial arts moves. Bill explains that it's over with Sookie. "No way," says Jessica. "Way," says Bill, showing surprising mastery over a dialect that may serve him well if they make vampire version of "The Hills."

At Sookie's house, Jason tries to convince his sister to press charges against Bill for "domestic something." Sookie defends Bill and their love. Tara tells Sookie that she "sounds like one of those sad country western songs about dumb bitches who let their men cheat and beat on them all for the sake of true love." Something about Tara's concern has the edge of PTSD rage from her experiences with Franklin, who I'm also worried about. When Talbot complained about the "brain all over the guest linens," it began to sink in that maybe Franklin really is dead. He's a little too needy to have stayed away this long.

At least Tara has Lafayette, who has been through something similar from the time he spent in Eric's dungeon, not to mention his childhood with Ruby Jean, his schizophrenic mother. We get to know Ruby Jean a little better this episode, as she pays Laf a visit to warn him that the vampires are coming. This might have been more useful about twenty-five episodes back, and her attempts to barricade the door with a zebra print inflatable chair don't do much for her credibility. Fortunately this turns into a golden opportunity to ask for help from Jesus.

"I got to pee, Jesus," says Ruby Jean when he arrives, which is not much of a greeting. But while she's in the bathroom, Jesus gets a chance to hang out with Laf, and realize how much he still likes him, even if he's not crazy about the drug dealing.

Sam gets a visit from his mother too, when Melinda shows up at his door as a sad looking hound before she shifts to naked. Sam kicks her out, but I hope it's not the last we see of her. The dog fighting story line never really got interesting (unless you wonder what happened to all those trained-to-kill pit bulls Sam set free), but Melinda and Tommy are the only white trash characters on this show who don't feel like caricatures. Granted Alan Ball grew up in the suburbs of Atlanta, not some small town off US 167, so his creative DNA is probably more at ease working with middle class drama. But I feel real sadness for Melinda whose masochism has surprising dignity. And I'm liking Tommy more and more, especially as he and Sam come up against Crystal and her, apparently, smelly relatives.

Crystal arrives at Jason's place obviously another victim of "domestic something." Jason sets out to put the fear into the family that has arranged her marriage to her cousin Felton. When Jason gets to the Hot Shots compound he discovers a naked guy crouched on the floor eating what appears to be a deer, while in another part of the house there's a radio playing a banjo cover of a Modest Mouse song. So we know the meth cookers are possibly werewolves or shape shifters, and Bon Temps has a surprisingly quirky radio station.

This (taking off clothes) turns out to be another one of Eric's plans. Hopefully this one will end better than the earlier plan to send Hadley over to Sookie's house to convince her to run away from Russell and not trust Bill. Given that this news is being conveyed by the cousin who sold her out, I'm not seeing the genius of it. So it's no surprise when Sookie ignores the advice.

It would have been nice for Hadley to stick around and help Sookie when her house starts filling up with werewolves. But Sookie does a pretty good job on her own, slicing a Jack Nicholson joker smile into Debbie's face with a pair of scissors. Bill shows up to help with the remaining weres, as does Jessica who is adorable chasing Gus (the were-Swayze) around the house.

Bill is no match for Russell, however, even without the help of his were guards. Russell throws Jessica to Gus for dinner. Good thing Bill taught her those nifty ninja moves because off camera, somewhere in the woods, Jessica turns the tables. Last we see them, Gus is begging for his life.

In the meantime, however, Russell kicks Bill around a few times, branding his face with a set of silver spurs. And it's Eric who ends up saving the day, by staking Talbot in revenge for what Russell did to his family. Sensing Talbot's death, Russell loses all interest in Bill and flies immediately home. Sookie doesn't know this and the episode closes with Bill and Sookie having smokin' hot Louisiana break up sex. While, Eric, ostensibly, is left naked with a big blob of blood, about to face a vengeful Russell.

I don't know how The Authority is going to sort this all out. But I guess that's why it's called The Authority. And not, for example, The Situation.