Veterans for Obama? Some now have doubts 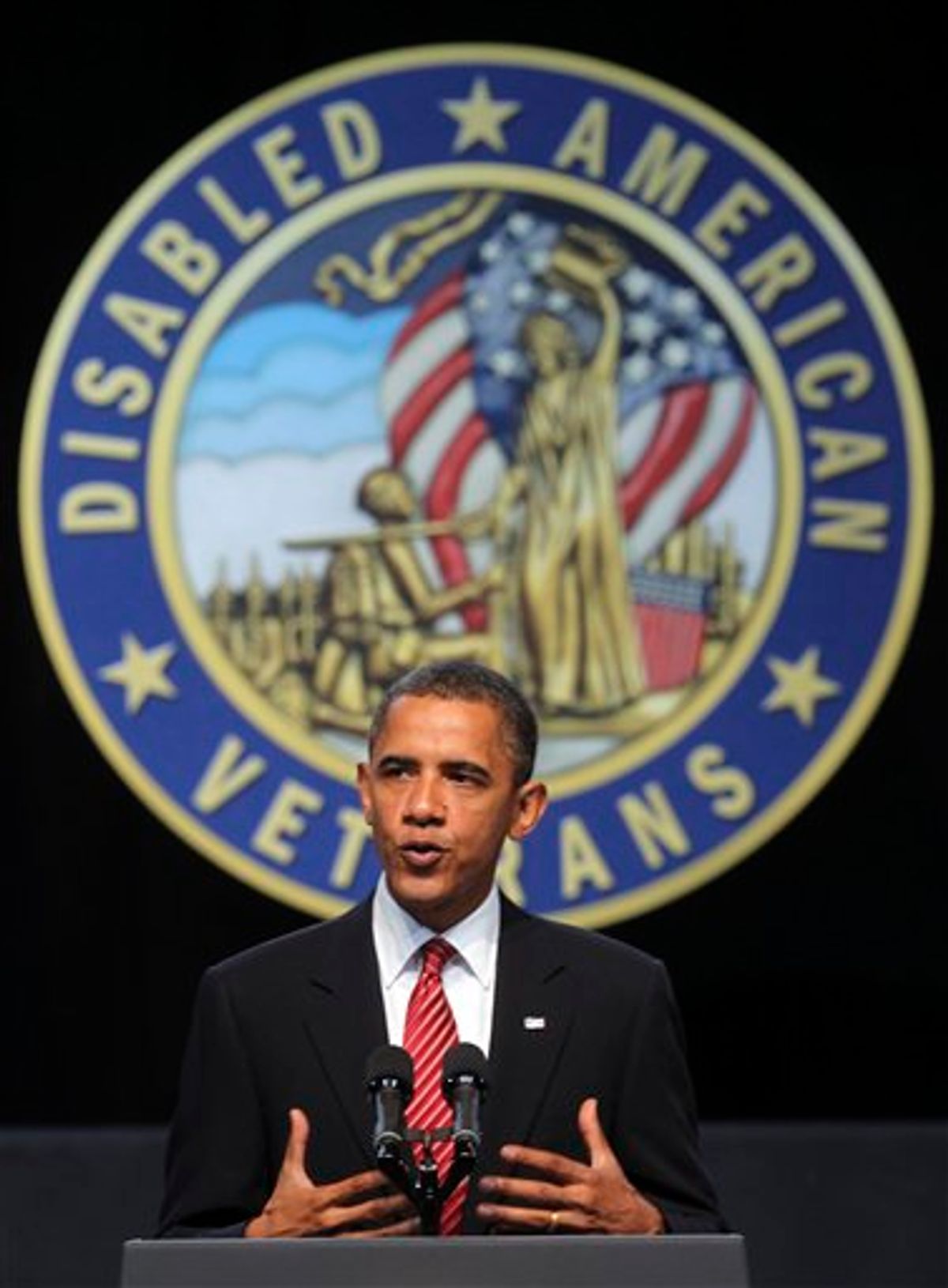 Relations between the Obama administration and some elements of the military veterans community, a constituency the Obama campaign carefully cultivated for the 2008 election, have grown distant and, in some cases, icy. Some veterans advocates describe a tangible sense of disenchantment, even among some of Obama's staunchest veteran supporters who actively campaigned on his behalf as part of "Veterans for Obama."

The flagging support among veterans results from a combination of unforced errors by the White House in basic constituency relations, coupled with rising frustration that the Obama administration is not aggressive enough in tackling wartime crises that continue to escalate, like suicides in the military. The damage is serious enough that it threatens to lurk as a political liability for Obama in 2012, since disgruntled surrogates might refuse to help the next time around.

"Suicides are skyrocketing, people are being deployed to war with PTSD, people are being denied their healthcare benefits, and the Obama administration is allowing the Department of Defense to punish people who are suffering from PTSD rather than giving them the medical care they deserve," said Steve Robinson, a retired Army Ranger and longtime veterans advocate who has worked for a number of veterans’ organizations. Robinson closely advised then-Sen. Obama on veterans policy and was prominently featured in a video tribute to Obama made by the campaign that played at the Democrats' 2008 convention in Denver. "I am confident that he believes in this generation and that he is actually putting into practice what he believes," Robinson said about Obama, from a huge TV screen at the convention. The Democratic nominee fought for vets, he added, "by stepping out, by speaking up, by legislating, by holding government accountable to take care of this generation when they send them to war."

Now, Robinson says he can't get his e-mails returned. "There is a deafness in the White House," Robinson said. "Let’s forget about the idea that you might want to do the right thing and keep your campaign promises. It is politically stupid."

A White House spokeswoman emphasized that Obama has scored some significant victories on veterans policy, including increasing funding for veterans' healthcare and easing access to some crucial benefits. Obama held a brief personal meeting at the White House on July 29 with representatives of nine veterans service organizations in an effort to reiterate the White House commitment to veterans' issues -- or patch things up a bit, depending on whom you ask. The White House Aug. 3 published a list of accomplishments on this front. (The Democratic National Committee pledged to arrange an on-the-record interview on this topic, but failed to produce one by press time.)

The White House, however, seems to bungle basic constituency relations, at least when it comes to veterans, keeping relatively influential advocates at arm's length, ignoring advocates with decades of experience, and neglecting the advice of advocates with ground-level knowledge about what is happening to troops.

Paul Rieckhoff, executive director of Iraq and Afghanistan Veterans of America, did not campaign for Obama in 2008. Rieckhoff, who was named one of "America's Best and Brightest of 2004" by Esquire and played a critical role pushing for passage of the new GI Bill that was signed into law in July 2008, says that the White House and officials at the Department of Veterans Affairs also have too often ignored his organization and now seriously risk alienating members of the largest Iraq and Afghanistan veterans group. He described current relations between the White House and IAVA as chilly.

"We have seen a huge communication breakdown between the administration and the veterans service organizations, especially at the V.A." Rieckhoff said officials from his organization have yet to be invited to talk policy at the V.A. with Secretary of Veterans Affairs Eric Shinseki during the Obama administration. "Our members find that totally unacceptable," Rieckhoff said. "Veterans of Iraq and Afghanistan are facing unprecedented challenges, including record-breaking suicide rates, staggering unemployment, and unacceptable delays in the disability claims process," he said. "Veterans are tired of waiting. We need action now."

Paul Bucha, a Medal of Honor recipient featured along with Robinson in the 2008 convention film endorsing Obama, defended the White House’s record on veterans work. He did admit, however, that he had repeatedly heard these same kinds of complaints.

"The bitterness and disappointment is real and sincere," Bucha said in a telephone interview.

The complaints mainly have to do with communication and personnel. The first White House point man on wounded warrior issues, Matt Flavin, has moved on to a post at the Pentagon. Advocates grumble about his replacement, Darienne Page, who also works as a receptionist in the West Wing, as lacking in horsepower. Veterans advocates complain of unreturned phone calls and e-mails that disappear into a White House void.

Improving veterans’ healthcare, a key issue, requires action at the Department of Defense, which oversees troops as they immediately return from combat, and at the Department of Veterans Affairs, which takes care of service members after they are discharged. Veterans complain that key posts at the Pentagon and the Department of Veterans Affairs have been filled with old Washington hands left over from the Bush administration or restored from the Clinton era, rather than new, aggressive agents of change needed to attack the sprawling, complex challenges facing veterans nearly a decade into two wars.

Some were disappointed by the hiring of people like V.A. Deputy Secretary W. Scott Gould, a former IBM executive and Treasury Department official in the Clinton administration. Gould is perfectly qualified, vets say, but unlikely to shake things up much. One increasingly frustrated veterans advocate with decades of experience working the issues in Washington summed up Obama's overall hiring in the field this way: "They went corporate."

In other cases, veterans have watched in frustration as the White House seemingly dragged its feet filling vital posts to serve veterans' needs. Veterans were flabbergasted, for example, as the White House failed until February 2010 to get Dr. Clifford Stanley sworn in as the undersecretary for personnel and readiness at the Pentagon. That is the top job at the Defense Department directly in charge of soldiers' healthcare while the service members are still in the military. The jury is still out on Stanley, since he's only been in the job for six months.

Other posts went unfilled, and some promised jobs seem to have evaporated. Robinson, the retired Army Ranger, produced an e-mail chain showing Obama campaign officials Carlos Monje and Phil Carter aggressively seeking his input on veterans' issues prior to the election. Later, e-mails from White House officials suggest they wanted Robinson at the Pentagon working in Stanley's office, as a special assistant to the undersecretary. The e-mails appear to string Robinson along for over a year, from May 2009 until late this summer, then just stop.

Robinson worked with the Obama administration on several legislative fronts, including a successful push to guarantee five years of free healthcare to veterans returning from Iraq and Afghanistan. He never got much of an explanation, he says, as to why the White House first wanted him to work at the Pentagon and then did not. A White House personnel official only told Robinson the White House was afraid Robinson would "shoot from the hip" at the Pentagon and suggested the White House did not want to ruffle too many feathers at the Department of Defense. Robinson continues his advocacy work from the outside.

Concerns about the handling of veterans' issues and the veterans' constituency seem relatively widespread. E-mail traffic among numerous former members of Veterans for Obama -- shown to Salon confidentially to provide a view of the scope of the irritation -- portray frustration about the White House and Pentagon's ignoring former members of Veterans for Obama and freezing them out of key policy positions in government. The e-mails also include speculation that the bumbling of relations by the White House might bite back at Obama in 2012.

Medal of Honor recipient Paul Bucha agreed that the administration has filled some vital spots at the Pentagon with politically safe appointees, rather than more aggressive agents of change. "There are things they could be doing better," he said. "There are not a lot of military types around the White House people." Bucha suggested that even a 15-minute speech by Obama to Vietnam Veterans of America -- no president has ever addressed this group -- might be a good start.

Bucha emphasized, though, that the White House is swamped with two wars, an ailing economy, and the BP oil spill, to name just a few of the crises on the White House steps. "The bucket is so full of problems that none of us get all the attention we want," Bucha said. He added that the Obama campaign was the first in his memory to make a serious effort to court the veteran vote and hit perfect pitch on veterans' issues during the campaign. There is an inevitable letdown for some people from the reality of governing, "now that access is not as open as it was during the campaign," said Bucha.

Meanwhile, the crises among veterans continue to get worse. "If you are not concerned, you aren't paying attention," said Rieckhoff, from IAVA. "Congress is making progress, but without presidential leadership, veterans' issues will be sidelined."