The sweet tarte tatin finds its long-lost savory twin. And it involves baking a tomato 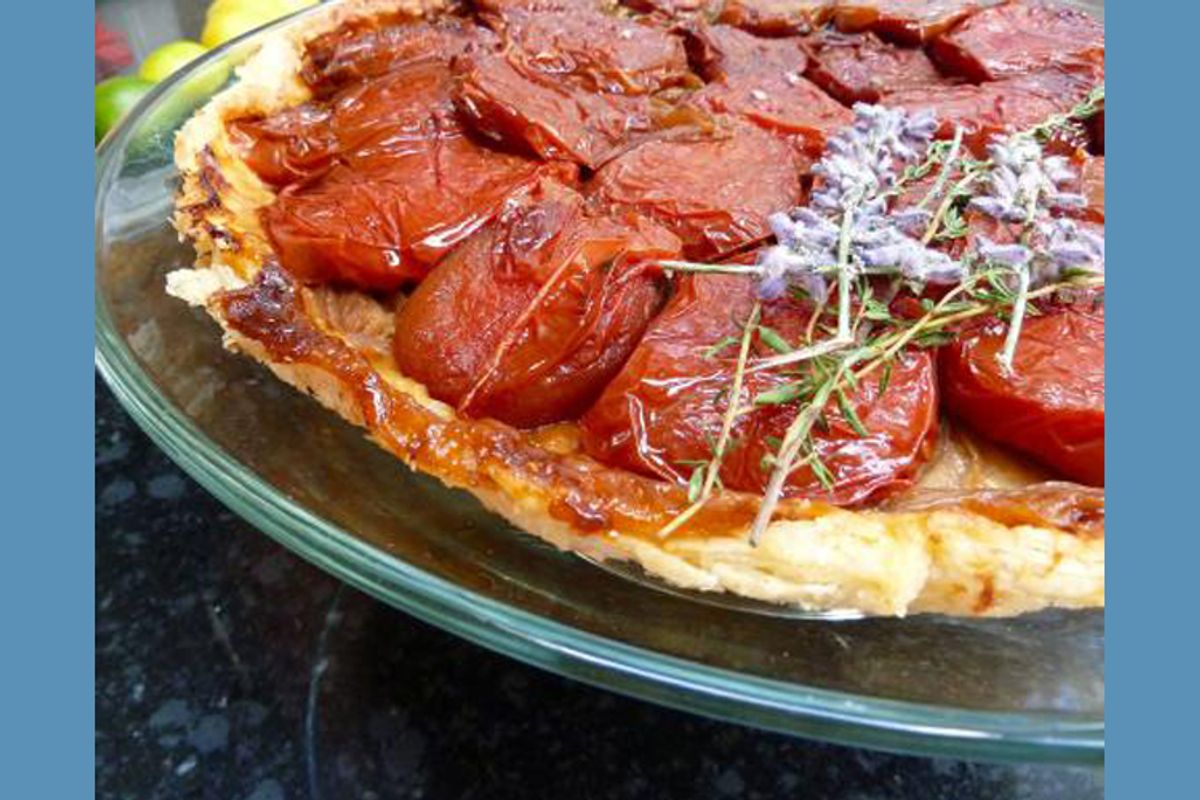 Inspiration can come from anywhere. A dream, a glimpse of beauty, music. For me, it often comes mid-mouthful.

I recently had such a moment at Bibou, Philadelphia. Philadelphia is in the middle of a culinary renaissance, getting well-deserved attention for a wave of new restaurants that rival those in neighboring New York. Bibou, a casual and intimate French bistro, was recently honored as a finalist for the 2010 James Beard Foundation award for best new restaurant. On my visit, the menu included an heirloom tomato salad, which is an exercise in simplicity: the most perfect heirlooms cherry-picked by chef-owner Pierre Calmels from the market that morning, artfully arranged on the plate and lightly dressed. The simple light tomato freshness of this salad contrasts well with the restaurant's menu of heavier classic French fare, including escargots, fois gras and pied de porc.

My inspiration that evening came from the heirloom tomatoes that commenced the meal and the dessert that concluded it: a clafoutis of fig and goat cheese. It was served warm and topped with honey ice cream, which was the perfect pairing of savory and sweet, hot and cold. As the exquisite flavor combination teased my palate, my mind raced with ideas and questions for the chef. I knew that the chef would be making his rounds in the intimate dining room at the end of the meal to see how we had enjoyed it. Feeling a bit star-struck, I assumed I would exchange no more than a few pleasantries and words of praise when my turn came.

But when chef Pierre came to my table, we talked about his previous posts at Daniel in New York and at Philadelphia's legendary Le Bec-Fin, where he worked prior to opening Bibou last year with his wife and co-owner, Charlotte. Despite his impressive résumé and his recent honors, he was humble, forthcoming and enthusiastic in response to my questions. He explained the trick to making a chilled fruit soup with as much velvety body as the one he had prepared that evening. We compared notes on our families, and I learned that like me, he has two young daughters. Thinking about the pig's feet and escargot on the menu, I asked if his children ate at the restaurant. I was amused to find out that his preschool-age children have very sophisticated palates, which include a preference for steak cooked medium rare in a green peppercorn sauce. When I asked about the origin of the restaurant's name, he told me about having two good friends named James, necessitating a nickname for one of them. That nickname, Bibou, which became the name of his restaurant, is derived from "biberon," which is both the French word for a baby bottle and slang for someone who enjoys a good bottle of wine and good times. What a great name for the restaurant, I thought -- encapsulating both its comforting atmosphere and joie de vivre. Chef Pierre was so amiable that in just minutes I went from being shy and star-struck into feeling like I was making a new friend.

Savoring my gustatory memories of the heirloom tomato salad and my tartlike dessert, I started to dream up a dish that would combine the simple focus on tomatoes in the salad and the more formal form and substance of a tart. I imagined a tomato tarte tatin, where slow cooking would caramelize and intensify the tomato flavor. Emboldened by our newfound intimacy, I asked Chef Pierre what he thought of my idea for a tomato tarte tatin. I felt nervous, knowing that the French classic is a winter dessert, and that my idea for a savory summer entree version might sound absurd. He looked thoughtful.

"My first concern," he said immediately in his French accent tres charmant, "is that there would be too much water." But he thought aloud and thought it could be done. "I have not made this, but I am thinking you could blanch, peel and take out the seeds from the tomatoes before baking, and that might take away all of the water. You could perhaps sear some cherry tomatoes on top."

"What do you think about using heirloom tomatoes, like the ones you served tonight?"

"No, I do not think that is the right kind of tomato, too watery. With a classic tarte tatin, you need to use the right kind of apple. So for this tomato tarte tatin you are thinking of, you need a tomato that is less watery," he suggested. He was right. The essence of a tarte tatin -- perfectly caramelized fruit atop a flaky pastry crust -- would be ruined by watery tomatoes. I would have to think about this.

"How would you season it?" I pressed further.

"Anything you like, perhaps basil, tarragon, rosemary, garlic, even lavender. I used to make a savory tarte tatin with zucchini and onion compote, topped with seared cherry tomatoes."

I had already gotten more information that I had thought I could dare to ask, but then chef Pierre disappeared into the kitchen for a minute. He returned with an entire cookbook on tartes tatins, including several that were tomato-based. Zut alors, it was en Français, but he distilled a few idées that I could use. "I do not have a recipe for you," the affable chef apologized, "but you can experiment. I am happy to share my ideas."

I came for a fantastic French meal, and left with an impromptu cooking lesson from a talented and generous chef. I was inspired to create a new recipe and also gained insights into the process by which a chef creates one. In this recipe for a tomato tarte tatin, I caramelized the tomatoes for a few hours in a slow oven, then drained off the excess liquid before assembling the tarte. These oven-roasted tomatoes have a delicate texture and intense flavor. I also added a layer of caramelized onions to add flavor, color and texture, and to absorb excess tomato juices so that the crust could remain crisp. Finally, I finished individual slices with a dollop of crème fraiche, to mimic the scoop of vanilla ice cream that often accompanies an apple tarte tatin. The crème fraiche also adds another dimension of mouthfeel and richness.

I am sure you'll be hearing more about Bibou and chef Pierre Calmels. And then I can say, I knew him when. Here is my tomato tarte tatin, inspired by my conversation with chef Pierre, to whom I send a million mercis.