The West debates its role in the country -- meanwhile, 23,000 women try to kill themselves each year 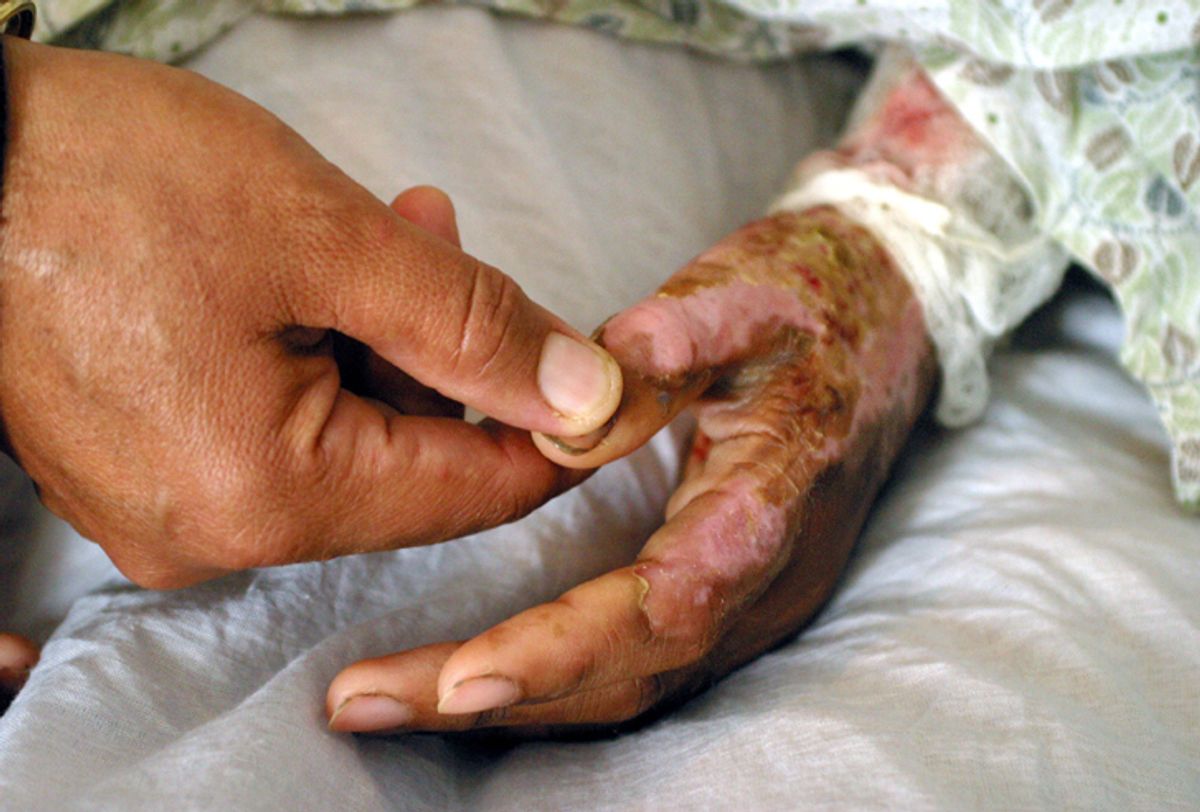 The mother of nineteen-year-old Zahara holds her hand while she lies in her hospital bed in Herat, Afghanistan April 7, 2004. Zahara, trapped in an unhappy marriage, attempted to commit suicide by burning herself with petrol. The Afghan Independent Human Rights Commission has recorded at least 110 cases of self-immolation by women in five parts of the country in the past year. Photo taken April 7. TO ACCOMPANY FEATURE AFGHAN-WOMEN-SUICIDE REUTERS/Farzana Wahidy AL/FA (Â© Reuters Photographer / Reuters)
--

Time magazine's recent depiction of a mutilated woman on its cover to illustrate "what happens if we leave Afghanistan" (without a question mark, mind you) has heated tempers on all sides of the debate over the American occupation of that nation. As Antiwar.com's Jeff Huber put it today, "If [Time editor Richard] Stengel wanted to show us what is really happening, why didn't he run images of Taliban leaders receiving bribe money that came from the United States? Why not show pictures of President Hamid Karzai's political machine stealing the most recent election?  Why not show the heroin crop our military has been ordered not to destroy? Let's see the innocent women and children that we have maimed and killed in the course of pursuing a war that weakens our nation's security and is counter to our best interests."

The list is endless, but another candidate for the next Time cover could be an image of one of the growing number of Afghan women who are taking their own lives. According to a report that former Afghan Health Minister Faizullah Kakar, who now works as a health adviser to President Hamid Karzai, submitted on July 31, more and more women aged between fifteen and forty are attempting suicide. Based on health ministry and hospital records, some 23,000 women and girls are trying to kill themselves each year, "a several-fold increase on three decades ago."

Kakar blames the suicide epidemic on untreated mental illness and health issues, social disorder, loss of loved ones, poverty, rape, domestic violence, the general hopelessness of a country engulfed in permanent war, as well as the socio-economic hardships Afghan women are forced to endure every day. 1.8 million women and girls suffer from "severe depression," Kakar says.

Included in these figures is the country's epidemic of self-immolation. In the Herat City Hospital alone, there have been over 100 cases of women and girls setting fire to themselves over the past 15 months, and 76 of them have died. The women who commit this desperate act in an attempt to escape forced marriages, domestic abuse, oppressive mothers-in-law, crushing poverty, and a host of other ills at home -- and live to tell the tale -- regularly claim it was an accident. But as Dr. Mohammed Jalili told the BBC last year, "the cases are often easy to detect. Apart from the extent of burns, one tell-tale sign of an act of self-immolation is that there are no burns on the arm used to pour the petrol."

According to UNIFEM, the United Nations Development Fund for Women, 65 percent of Afghanistan's 50,000 war widows regard suicide as the only way out of their desperate situation. 16 percent of these women may already have ended their lives. In any case, their life expectancy is approximately twenty years lower than that of women living in other parts of the world.

Ironically, there is some evidence that the increase in suicides, including self-immolation, may be connected with an increase in geographic mobility and social expectations brought about by the American invasion and occupation. In Herat province, for example, "former refugees who experienced a more open culture across the border are often blamed for demanding too much freedom on their return home. This, added to a growing awareness about basic human rights and the sudden influx of foreign music, television and fashion that accompanied the US-led invasion in 2001, has caused huge ruptures in the traditional fabric of society."

Maria Bashir, a public prosecutor in the province and the first woman to hold this office in Afghanistan, says: "I have seen a woman whose husband cut her nose and ears off, a woman whose husband shaved her hair off so she would not go outside, a woman beaten with a heavy cooking pot until one of her ears was smashed into her skull, and a woman beaten with the handle of a shovel." All on our watch, I might add. So, are these tragedies our fault or that of "the Taliban"? Are they a reason for the US military to stay or to go? Will there be more or fewer such cases if we pack up and leave? Hurry up and decide -- it's time for the next news story.

By now it should be obvious to everyone who has seen the Time image that using "the plight of women" to justify military adventure X, Y or Z is the oldest trick in the propagandist's playbook. By all means, let's talk about "what happens to Afghanistan if we leave," but please, let's leave in the question mark.