What a boob: My breast-feeding failure 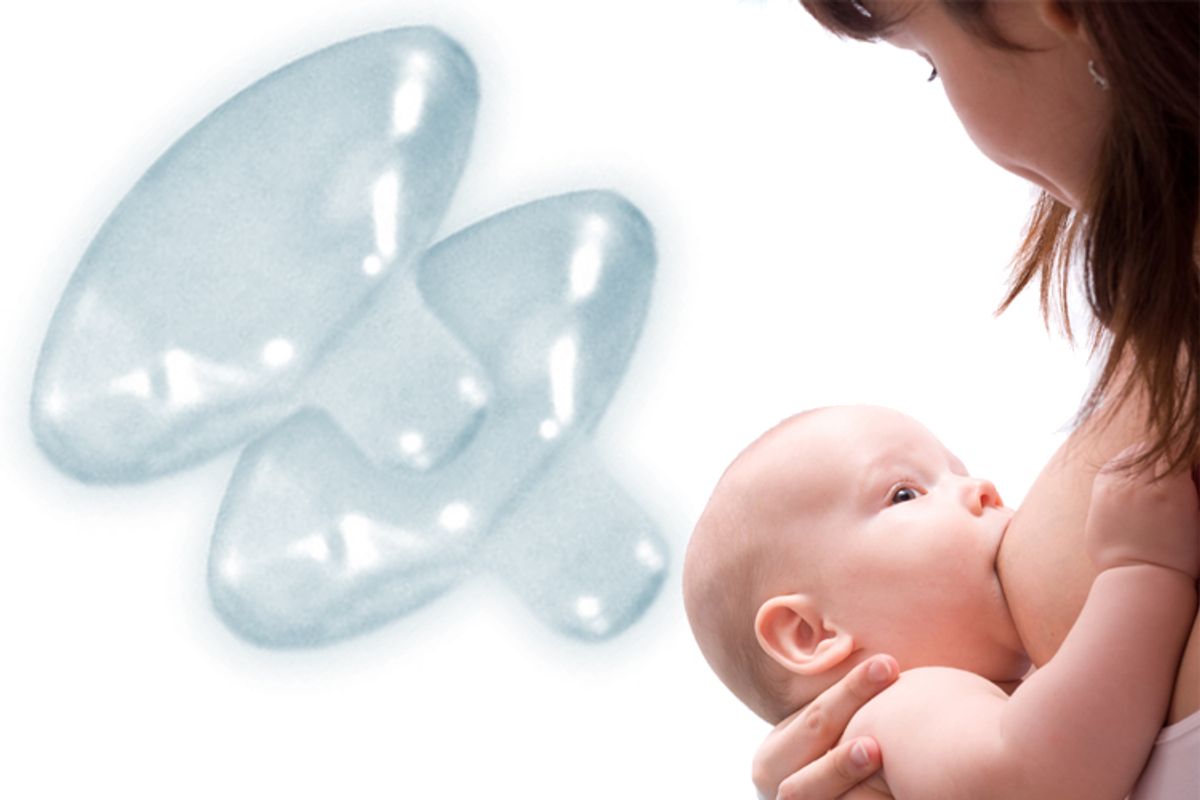 The story starts, as most do, with an exhausted, excited, terrified new mother seeking to connect with other exhausted, excited, terrified new mothers. I’d given birth to my son, Elliot, just 10 weeks before and had come to a local breast-feeding support group at the urging of my own mom, who gently but firmly commanded me to get out of the house and talk to the first mother I saw.

Despite my best efforts to resemble some version of my pre-partem self, I was 100 percent Frazzled New Mom as I pulled up. My nursing bra crept out of a shirt stained with spit-up, my hair was a cowlicky mess, my haphazard makeup failed to mask the dark circles under my eyes, and my diaper bag was an erupting volcano of baby essentials. I lugged Elliot and his car seat through the doors only to find the small, cramped room overflowing with mothers and their nursing babies. Every woman was like the serene earth mother of mommy magazine lore. Their babies suckled peacefully at their breasts, occasionally touching the dainty handmade blankets that held them. Their hair was brushed and perfect, their faces fresh. But mostly I noticed not one of the mothers was using the horrible doohickey hiding shamefully in my diaper bag. Not one of the mothers was using the nipple guard.

Nipple guards, for those not in the know, are small, thin devices of rubber, latex or silicone with small perforations at the nipple that allow the breast milk to flow into the baby’s mouth. They are not cute. I settled in the room's one open chair with a borrowed nursing pillow (whoops, I was supposed to bring my own), and as Elliot woke from his nap and started to cry, I dug in the pockets of my diaper bag with a slight panic, feeling the eyes of the mothers on me as if I were getting dressed in the girls' locker room for the first time.

In fact, I was so nervous I couldn't get it affixed quite right, and while I fumbled, Elliot became more and more agitated. All around the room I saw women simply opening their bras, the babies finding the nipple, the whole routine so natural, intimate and right. With a twinge of envy, I ducked out into the lobby and nursed Elliot in the only way that worked for us, with the little rubber crutch that had become a symbol of my inadequate motherhood.

My son was born at term, with no health problems, following a smooth delivery and no-drama pregnancy. He was also 5 pounds, 14 ounces, and could not latch on for the first three days of his life. My husband and I saw doulas, lactation consultants, nurses, doctors and breast-feeding experts, but Elliot’s beautiful little mouth was just too tiny. So the nipple guard was introduced, a tool we were told we should only need to use for a few days, and Elliot and I were able to feel the joy and satisfaction of nursing. Because of his low birth weight, we nursed him every two hours, weighing him before and after each feeding to measure how much milk he ingested (one of the main risks of nipple shields is a reduced rate of milk transfer). I continued, with every nursing, to offer him my bare nipple instead of the guarded one, and he continued, with each nursing, to refuse.

The support I got from the professionals did little to ease my anxieties. Elliot slowly, steadily gained weight, but still lagged well behind other babies in terms of size. His pediatrician was concerned, and suggested that we immediately switch to formula. I hated the idea of losing that nursing bond. Nipple guard or no, I could still feel my son at my breast, could see him look up at me with his beautiful blue eyes, touch my skin with his tiny fingers. We went to a lactation specialist in Washington, D.C., who worked with my husband and me on every possible repositioning, skin-to-skin, bonding and relaxation method we might have missed, even adding a plastic syringe to assist Elliot’s latch. Eventually, though, she concluded that his mouth was simply not big enough. Her verdict: no formula, stay with the nipple guard.

Anyone who has waded into the breast-feeding wars in this country -- when women can do it, why and how they should do it, the benefits of doing it -- know that the only consistency may be the mixed messages. What followed for us was a terrible back and forth in which our doctor and lactation consultant were each dismissive of the other's conclusion but unable (or unwilling?) to speak to each other directly, and so we spent hours trying to come to an agreement. I felt like the child of a messy divorce: irreconcilable difference of opinions on breast-feeding. When Elliot was almost 2 months old, at the recommendation of his lactation consultant, he had a frenectomy, a quick procedure in which the little fold of tissue under the tongue is snipped to allow for greater mouth movement. It made a small improvement in his latch, but not enough.

And then one day, I didn't have to anymore. Elliot was 7 months old, and we were visiting my parents in New Mexico, and the nipple guard could not be found, and I was panicking. That's when I looked down to see my son happily suckling at my breast with no hesitation. We nursed like that for another seven months, before he switched over to whole milk, all the while gaining weight at the same rate as he had with the nipple guard (which allayed any fears I had harbored about his low weight being the result of nipple guard-related reduced milk supply). I loved nursing without it, but when I look back now, all the nursing blends into one sublime experience. It's hard to recall which sessions involved a little silicone thingy and which did not. They were all, in the end, precious.

Now that Elliot is a happy, 20-month-old tiger of a boy -- running everywhere, jabbering up a storm, laughing at the silliness and wonder of the world and insisting on at least three bedtime books a night -- I realize how much unnecessary stress I put myself through during that whole ordeal. With the benefit of sleep, a dip in hormones and a thriving boy, I can see I might have been, well, a bit overemotional.

But it felt to me at the time that breast-feeding was one of the first real challenges motherhood presented me, and that if I failed, I would be failing my son. This may not be rational, but my feelings were fierce and real. Ultimately, I had far more in common with the other mothers at the breast-feeding support group than I realized at the time: We are all trying to make the right choice for our children, even if it subjects us to guilt, criticism or doubt. For some women, their choice may be nothing but breast. For some women, their choice may be formula. For me, the choice was a strange little silicone helper -- and if that is all your son needs to flourish, then you are a lucky, blessed mama indeed.