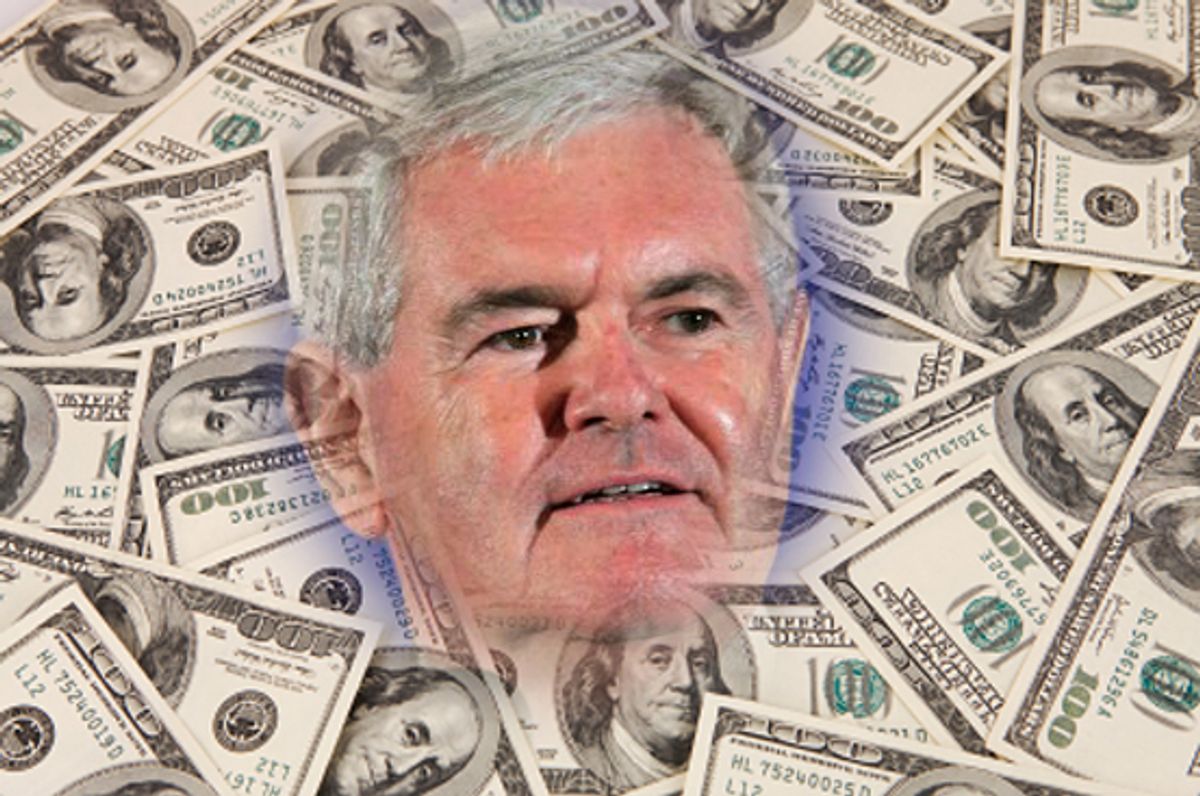 Newt Gingrich's ex-wife told Esquire that the former speaker cares more about getting rich than running for president. So we decided to take a closer look at who is funding Gingrich's primary political committee, a 527 group called American Solutions for Winning the Future. A significant chunk of its funding comes from oil and gas and coal companies and wealthy real estate evelopers, with the rest raised in $100 and $200 increments from conservatives around the country, according to the group's IRS filings.

American Solutions doesn't appear to pay Gingrich a direct salary, but it has spent millions on private jets to ferry him and his staff around the country and generally allow him to promote his books and movies. (There are other groups, like Gingrich's for-profit Center for Health Transformation, that may be paying Gingrich directly, but such information is private.) So far this election cycle, American Solutions has taken in over $20 million, and poured much of it back into fundraising expenses.

We've taken a look at the IRS forms that American Solutions files periodically showing what's coming in and what's going out. Here are some of the group's biggest funders:

Unsurprisingly, given the contributor list, American Solutions has run national TV ads opposing the cap-and-trade bill. But more than anything, the group is a vehicle for self-promotion for Gingrich, one that he benefits from financially.

This is particularly notable because Gingrich struggled through much of his earlier career with financial problems. Speaking to Esquire, his ex-wife Marianne recounted one story when she and Newt, burdened with child support payments and other debts, didn't have $10 to buy a charity ticket. Then in 1997, when he was fined $300,000 by the House for ethical lapses -- some involved financial shenanigans with his network of charities -- he simply didn't have the money to pay. This led to an embarrassing episode in which he was going to get a loan from Bob Dole to pay the fine before scrapping the arrangement when it came under scrutiny.

So if what Gingrich really cares about is making money, as his ex-wife contends, American Solutions is a significant accomplishment.