Wyclef Jean wants to be the troubled nation's next president 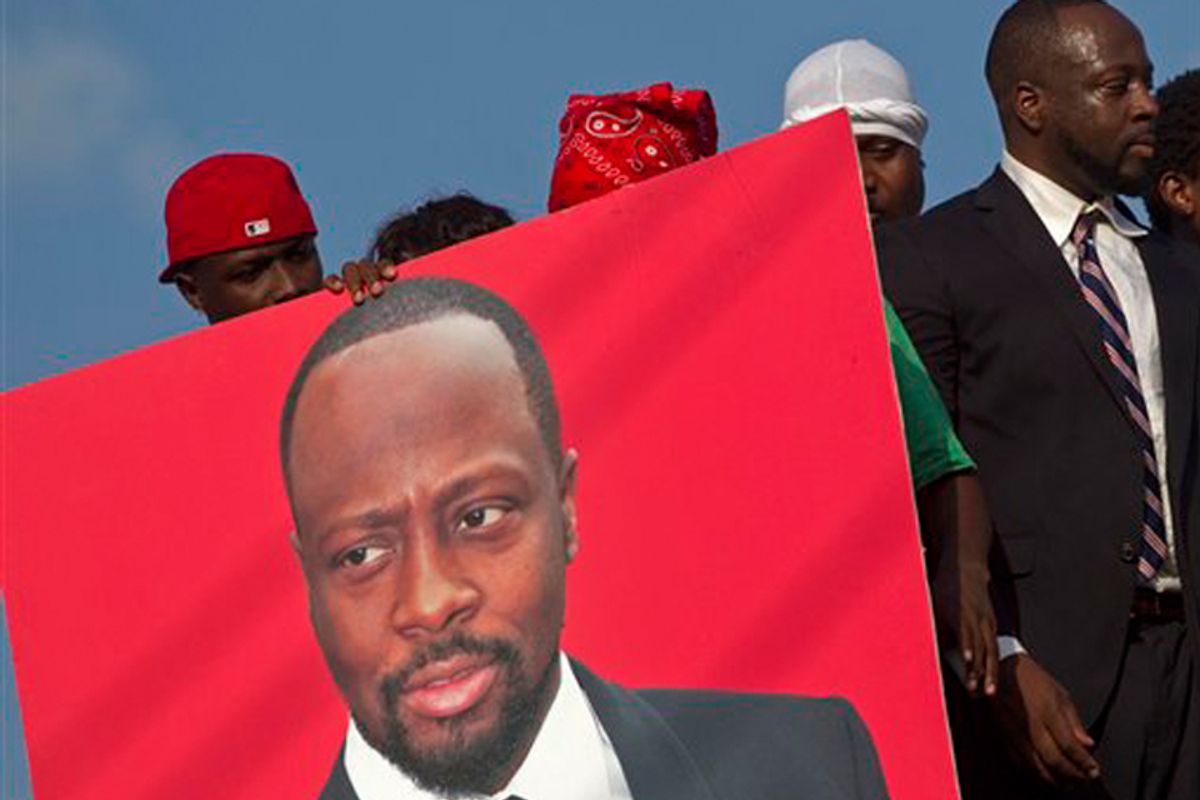 Wyclef Jean, right, leaves the electoral office in Port-au-Prince after submitting paperwork to run for president of Haiti.
--

The rap star’s declared candidacy and potential election would be a disaster for Haiti. Whether Jean’s intentions are sincere and pure, they reflect a deeply troubling phenomenon around the world: the unrelenting celebrity worship that ferments a trivialization of politics and a dismissal of complicated problems. The depressing thing about Jean’s candidacy is our deepening confusion of fame with virtue and celebrity with competence.

Though Jean’s humanitarian efforts after Haiti’s earthquake deserve some props, they hardly qualify him for the daunting technical tasks of effectively leading his crisis-prone nation.

First, we don’t know the details and depth of Jean’s inexperience. Why? The Florida Division of Corporations dissolved Yéle Haiti, Jean’s philanthropic organization, and its predecessor, the Wyclef Jean Foundation, several times. The offense? The organizations failed to file legally required state disclosure reports. However, the rap star’s foundation did collect $1,142,944 in total revenue in 2006, which presumably sheds light on the organization’s operating budget.

That is a modest, silly budget compared to the stakes on Haiti’s table. The overall damage and physical loss caused by the earthquake amount to $7.9 billion, according to the Interim Haiti Reconstruction Commission, the international body charged with overseeing the nation’s recovery chaired by Bill Clinton and Haiti’s prime minister, Jean-Max Bellerive. Moreover, another $5.3 billion -- pledged by a host of nations -- must be skillfully collected and effectively spent.

There’s a gaping mismatch between the amount of money and number of personnel the rap star has experience managing versus the skill set and level of money required to lead Haiti’s immediate and long-term recoveries.

One might argue that Haiti needs inspiration; so Jean is just the right "icon" for the moment, an ideal figurehead for a nation clamoring for hope. This argument recalls our own president’s election in 2008. Jean and Barack Obama are superstar cool -- handsome, smooth and inspirational personalities who embody change and progress. But the analogy ends there. Only Obama has the demonstrated intellect and decision-making skills to steer a nation out of duress.

Amid the hype swirling around Jean’s declared candidacy, let us not fall into the trap of confusing stardom with ability, or good public relations with actionable skills. This confusion and celebrity-worship -- which adulates stars for dabbling in Darfur, or commenting on Earth Day, or singing for Haitian orphans -- trivializes the very problems celebrities purport to help.

In fact, celebrity misadventures in politics are legendary. But the risk that comes with electing a Ventura in Minnesota or a Schwarzenegger in California is nothing compared to the risk staring Haiti in the face. More so than any place on Earth, Haiti has no margin of error or wiggle room for failure. Roughly 1.5 million Haitians, or 15 percent of the population, have been directly devastated by the quake. Over 300,000 lost their lives and 1.3 million are still homeless. The nation needs to rebuild at least 105,000 new homes, 1,300 schools, and 50 medical facilities.

Though Jean has no credible experience in leadership, Haitians have become firsthand experts in resilience and failed leadership: Even before the catastrophic earthquake,76 percent of Haitians were living on less than $2 a day. And malaria, tuberculosis and HIV/AIDS still threaten the nation at unacceptable levels.