Before flying was bad: My glory days as a flight attendant

My job in the '70s was fun and glamorous, but Steven Slater's exit reminds us just how miserable travel has become 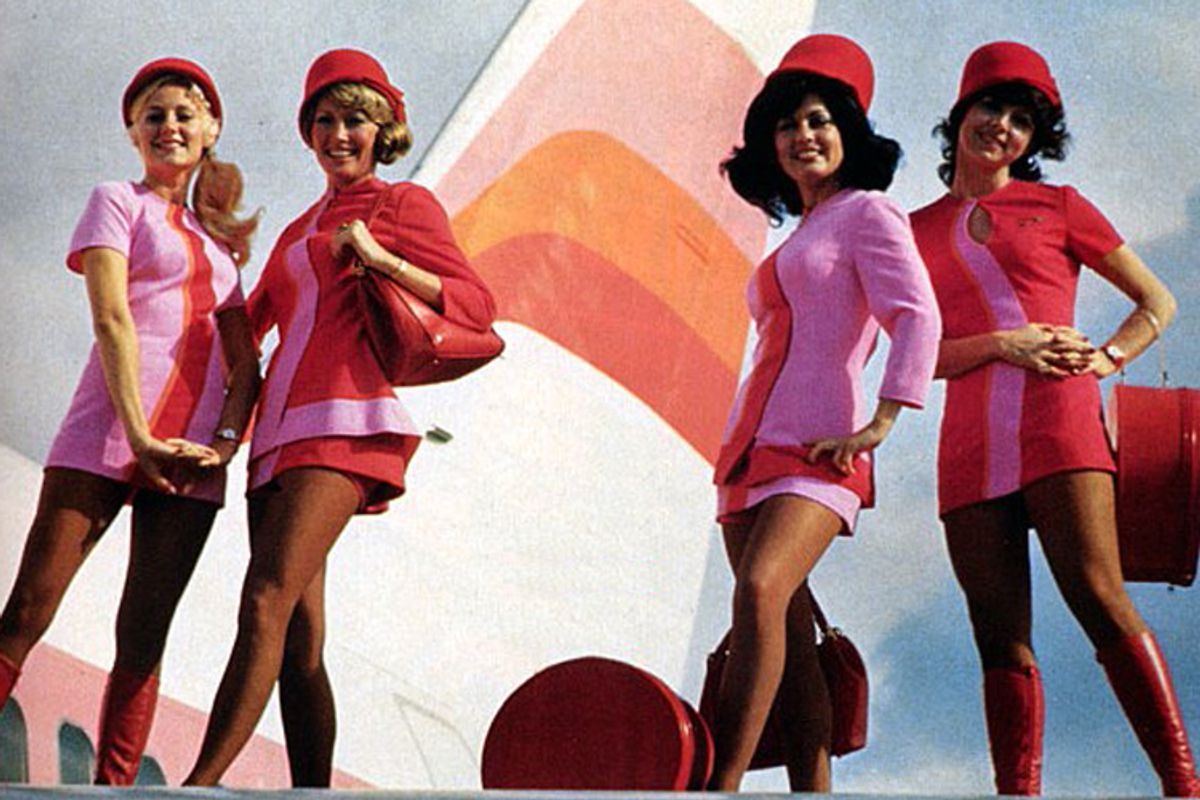 The men came in dark suits, striped ties, white shirts. The women wore suits too -- with floppy ties and high-collared blouses, or wide-legged pants and tunic tops. Even the children dressed up. Little girls in party clothes, boys in sherbet-colored Polo shirts and khaki pants. This was 1978, when flying was still an occasion, a special grand event that took planning and care. I worked as a TWA flight attendant then. I stood in my Ralph Lauren uniform at the boarding door and smiled at the passengers through lips coated with lipstick that perfectly matched the stripe on my jacket. Mostly, the passengers smiled back.

For eight years I walked the aisles of 747s and 707s and L1011s in my high heels, handing out menus and magazines, playing cards and stationery. Back then, cocktails came with a red stir rod shaped like a propeller and there were three choices of entrees on flights over four hours -- in coach. We served after-dinner drinks on a cart topped with dry ice we'd sprinkled with water to create fog and passed pale green mints on a silver tray. In first class, we laid the linen napkins on tray tables, making certain the TWA logo was in the bottom right corner, mixed martinis and dressed lamb chops in gold foil stockings.

What we did not do, or even consider doing, was jump out the evacuation slide after a fight with a passenger, as Steven Slater, the JetBlue flight attendant, did. It wasn't that the passengers back when I was asking them to stay seated until the plane came to a complete stop and the captain turned off the fasten seat belt sign were more compliant or better behaved than they are now. Nor was it that we flight attendants were more patient or tolerant. Passengers got up when they weren't supposed to and yelled when we ran out of manicotti; flight attendants stood in the galley and rolled their eyes at the guy in 47F or got on the P.A. and demanded people obey the rules. But somehow, over the past three decades, all of us have grown tense and miserable -- passengers and employees alike. It seems that every time I fly, I hear someone say out loud: Flying just isn't fun anymore.

When I began my career as a flight attendant, I was a 21-year-old with a B.A. in English and stars in her eyes. I wanted to see every city in the world. I wanted to have adventures that, I hoped, would fuel a writing career some day. Flying was glamorous then, and as I wheeled my suitcase through airports from Chicago to Cairo, kids still pointed and adults still smiled at me. Deregulation had just passed, and I watched as fares began to drop and flying became more accessible to everyone. Yet that did not change our level of service or the passengers' attitude. A mutual respect existed, and despite the occasional grumpy businessman or harried mother or someone who was just a jerk, I went to work eagerly and left happy. I think it's fair for me to say the passengers felt the same way.

By the time I hung up my wings in 1986, change had begun. Corporate raiders were buying up airlines, slashing salaries and fares, and cutting amenities. Carl Icahn, who took over TWA, announced he was going to "de-cunt" and "re-cunt" the airline. His plan was to get rid of the flight attendants whom he saw as too old and overpaid and replace them with young, pretty ones who would work for half the amount and double the hours. Even the airlines that avoided the raiders followed them in changing compensation and workloads. I cannot deny that a job that combines physical labor, standing up for long hours, dealing with people, and jet lag is tiring. But the changes in work rules turned tired into exhausted, and the changes in pay turned comfortable into barely able to make mortgage and car payments. Smiling became harder.

But passengers still expected the service they'd grown used to. Simple pleasures like cream for their coffee and pillows on their seats disappeared. Before long, they were paying for food and to check their luggage. They sat in seats with less leg room and had fewer choices of flights, and those flights had more connections than ever before. Flight attendants stopped smiling and passengers started grumbling.

After 9/11, new security measures not only added longer lines and earlier check-ins, but took away our privilege of carrying knitting needles or our favorite moisturizer on board with us. Although we want to be safe when we fly, in some ways it all just adds to the misery of our experience.

Last summer, I used my hard-earned frequent flier miles to upgrade on a United Airlines flight from Honolulu to Chicago. For several years I'd endured long flights with no food, cramped seats, and some of the crabbiest flight attendants around just to keep adding up those United miles. When I sunk into Seat 4A, I expected that for the first time in many years I was actually going to have a great flying experience. Even when the flight attendant announced that the movie system was broken, I didn't mind. Even when they ran out of pre-takeoff champagne at Row 3, I only minded a little. But by the time they ran out of first-class food, and brought me instead a coach meal still wrapped in that familiar foil, I minded a lot. I minded the way the flight attendants scowled, constantly. I minded that they didn't respond to the call button. I minded that my seat got stuck and no one knew how to fix it.

I looked at my seat with its fabric worn in spots and I looked at the miserable flight attendants shuffling through the cabin. They were as unhappy as I was -- unhappy with all of it, the bad food, the broken equipment, the unhappy passengers, their own crappy jobs. I remembered how, when I began my job at TWA, my cousin called me a glorified waitress. She had offended me with that description. Sure, I served meals, but to me that job was so much more. It was glamorous and fun and sophisticated. I learned about fine wine and gourmet food; I learned how to get around foreign cities alone, how to talk to strangers, how to get along in the world. Today's flight attendants, selling pre-packaged food and explaining about ever increasing fees and cutbacks, are not even glorified waitresses.

I understand that we can't return to a time when flying was an unforgettable experience -- for positive reasons. When girls like me imagined putting on a uniform and a mega-watt smile and striding down the aisles of a jet with pride and purpose. When the passengers on that plane felt coddled and safe and cared for, if even for just a few hours. On Dec. 17, 1903, the Wright brothers made their first flight, an amazing and celebratory achievement. Over a hundred years later, that sense of wonder and celebration is almost completely gone. Maybe Slater will remind us of that. Maybe he'll remind us of a time not so long ago when the sky really did seem limitless, and those of us up there together still felt we were a part of something extraordinary.

Ann Hood is the author of the novel "The Book that Matters Most," published this month with W.W. Norton & Co.