In Colorado, Republicans nominate yet another very beatable candidate 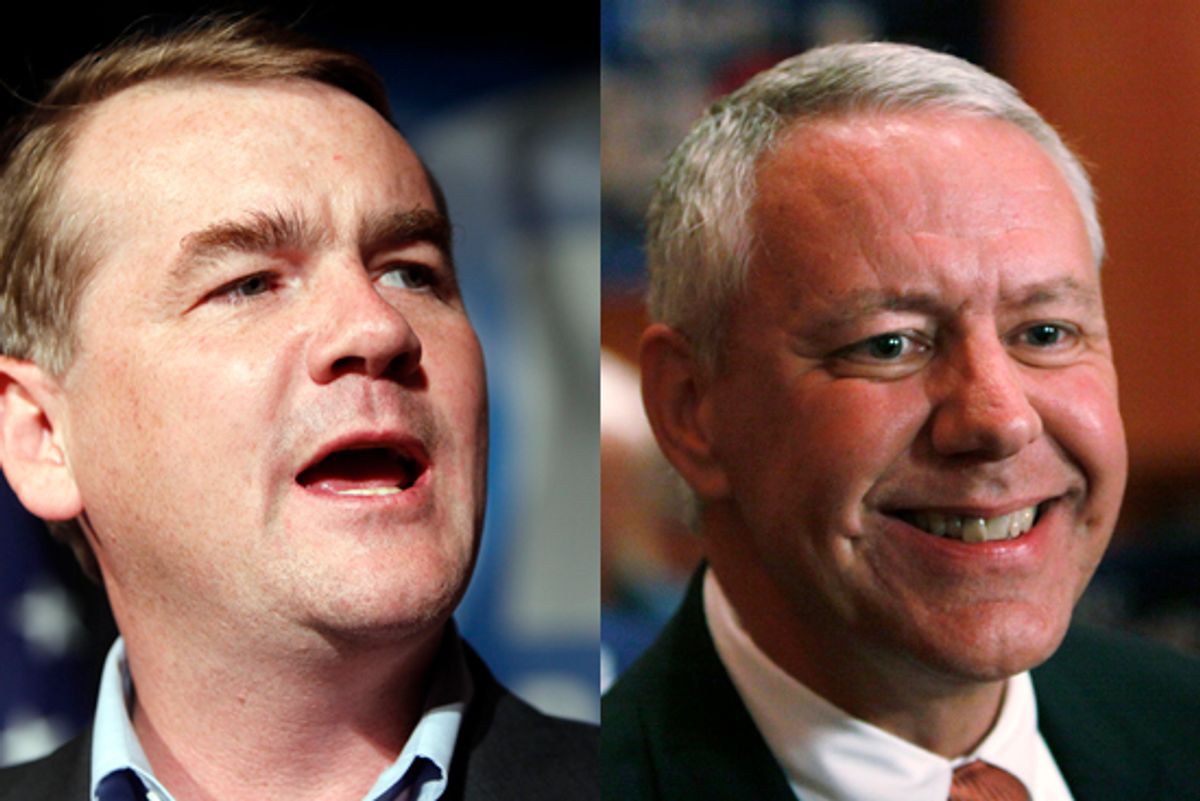 The timing should be perfect for Republicans to pick up the Senate seat that will be on Colorado’s ballot in November.

The Democrat who was elected to it in 2004, Ken Salazar, quit in the middle of his term for a Cabinet slot, and his appointed successor -- Michael Bennet, the previously unknown chief of the Denver schools -- has struggled to gain popularity and spent most of his tenure worrying about a primary challenge that has divided the Democratic Party. Plus, given the national climate, it seems almost unavoidable that the state’s electorate, which sided with George W. Bush twice and Barack Obama in 2008, will swing back to the GOP this fall.

But it’s starting to look like it won’t. In last night’s primary, the GOP establishment’s preferred candidate, Jane Norton, was knocked off by Ken Buck, a favorite of the Tea Party movement. And when Tea Party candidates win GOP nominations in competitive statewide races, it instantly worsens the Republicans’ November prospects.

Granted, Buck, an elected district attorney and one-time Capitol Hill staffer, is a far more polished politician than some of this year’s other Tea Party products. But he served up plenty of red meat in the primary campaign (arguing for closer ties between church and state and telling voters to back him over Norton because “I do not wear high heels”), which will now be recycled into campaign advertisements and mailers for Bennet, who survived his primary fight with former state House Speaker Andrew Romanoff.

The bigger problem for Buck, though, is his party’s shocking disarray in Colorado’s other marquee race. In yesterday's primary, GOP voters were forced to choose between Scott McInnis, the early front-runner whose candidacy has been practically destroyed by plagiarism revelations, and Dan Maes, a Tea Party insurgent whose image has been marred by reports of unpaid bills and a sizable fine for campaign finance violations (and by his odd campaign against bicycles, which he seems to believe are somehow connected to a nefarious plot).

When the votes were tallied, Maes had prevailed -- but the bigger winner is clearly John Hickenlooper, Denver's mayor and the Democratic nominee. Beyond facing a weak foe from a fractured party, Hickenlooper will further benefit from the presence of Tom Tancredo, the nativist former congressman and presidential candidate who condemned both McInnis and Maes a few weeks ago and jumped into the race as a third party candidate -- a move that will only siphon votes from the GOP column.

In other words, Buck won’t get any help from -- and may be significantly hurt by – his party’s gubernatorial nominee. Which means that Bennet, for all his flaws and despite this year’s climate, could very well win a full term -- and preserve for the Democrats a seat they have little business holding.

And Colorado’s is far from the only key Senate race in which the GOP is shooting itself in the foot like this.

There’s also Nevada, where Harry Reid should by any reasonable standard be a goner this year. And yet, Republicans have insisted on nominating Sharron Angle, a kooky Tea Party favorite who has fallen behind the majority leader in recent polling. And there’s Kentucky, a race the GOP should win by 20 points -- but where the Democrats are still in striking distance, thanks to Rand Paul, the Tea Party hero whose first act as his party’s nominee was to question the wisdom of the Civil Rights Act. This week, Paul is fighting off a report that, as a college student at Baylor, he kidnapped a coed and forced a bong on her.

The list goes on. Florida’s open seat should be in the bag for Republicans. But Marco Rubio’s Tea Party-fueled insurgency flushed Charlie Crist out of the party, and now Crist is running as an independent, leading the polls, and very likely to caucus with Democrats if he prevails. In California, the GOP embraced the erratic Carly Fiorina and snubbed Tom Campbell, a moderate far less likely to offend swing voters. And then there’s Pennsylvania, where Pat Toomey scared Arlen Specter out of the GOP -- giving Joe Sestak, who knocked Specter off in the Democratic primary, a very good shot at winning the seat.

By my count, that’s six Senate races in which the GOP’s odds of victory are measurably longer because Tea Party candidates have been nominated. And there’s still a chance this list could grow, with next month’s Senate primary in New Hampshire.

Yes, Republicans can -- and almost certainly will -- win some of these races. Who knows, maybe even Buck will defy expectations and unseat Bennet. But Republicans only have 41 Senate seats right now. They essentially need to catch all of the breaks in November to claim a majority. But if you look at the candidates they’ve nominated, they’re just taking far too many chances.