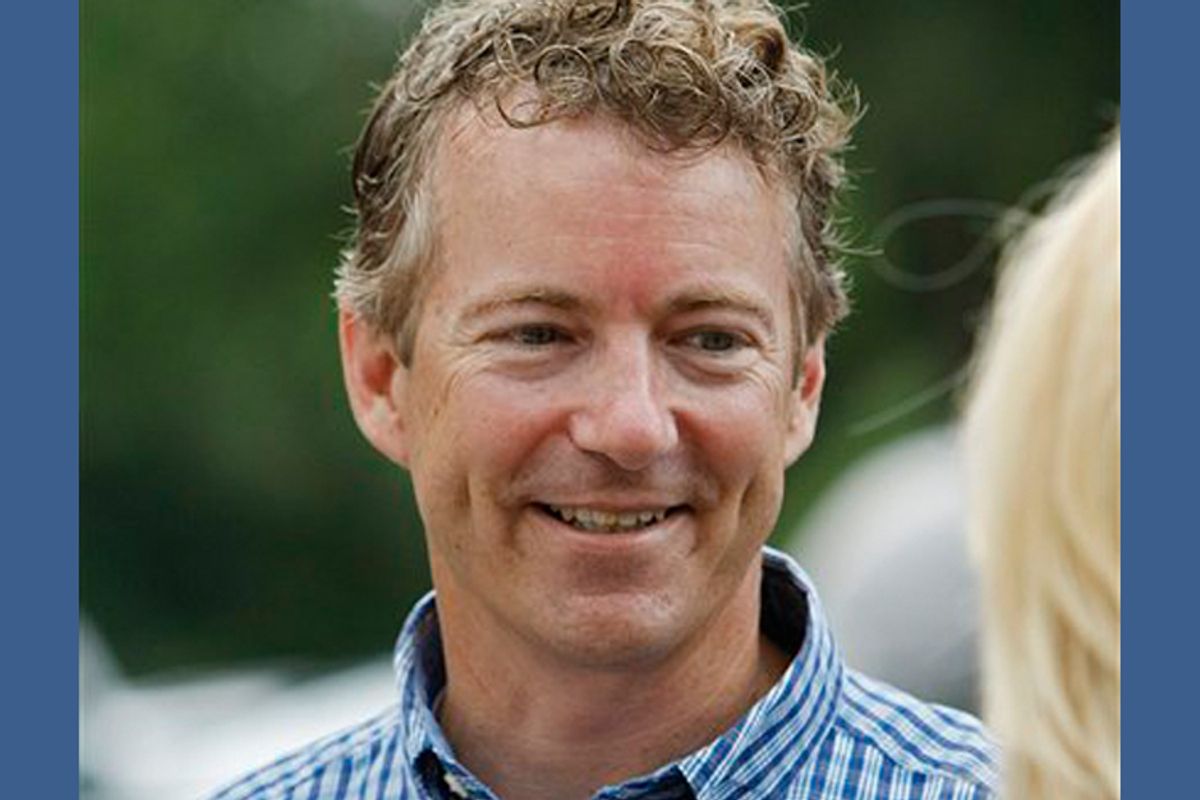 On Monday, Jason Zengerle told us the wonderful story of libertarian Senate candidate Rand "Randy" Paul's college daze. Paul was a member of a "secret society" of intentionally blasphemous pranksters. The stunt that got the most attention was when they tied up and blindfolded a swim team teammate of Paul's, put her in a car, and "tried to force [her] to take bong hits" and worship something called the Aqua Buddha.

"They never hurt me, they never did anything wrong," the unnamed woman told GQ, "but the whole thing was kind of sadistic."

After the story of this "kidnapping" and idol worship rocketed around the Internet and the shouting-head shows, Rand Paul's campaign stopped not denying it and sent the candidate to Fox to "categorically deny" "kidnapping" and "forcibly drugging" anyone.

Today, the Washington Post's Greg Sargent got an exclusive with the woman, who totally vindicated Paul by saying she was never kidnapped! Except that her story did not change, at all -- the facts of it are the same -- she just doesn't consider it a proper, illegal kidnapping.

"[They] came over to my house as friends that I knew," she told me. "They immediately said, 'We're going to tie you up and go for a ride.'"

She reiterated that they took her to a room filled with pot smoke and told her to partake, but she emphasized that she hadn't been forced. "He did not drug me," she said. "He did not force me physically in any way."

She said they then "took me out to this creek and made me worship Aqua Buddha." And she added that the whole thing was so "weird" that afterwards she ended relations with Paul and his friends.

So Rand Paul and his friends tied and blindfolded a woman, took her "for a ride," told her to smoke marijuana, and made her worship the Aqua Buddha. But no kidnapping. Or successful forced drugging.

The Paul campaign, obviously, was thrilled to see that false and salacious "kidnapping" story debunked, because words don't mean anything anymore, which is how he was able to deny "illegally kidnapping" someone while never addressing the actual incident, and now claim that that nonexistent charge was "completely shot down" by a reiteration of what he actually did do.

In our conversation, she elaborated that she doesn't want her name in print because she's a clinical psychologist who works with former members of the military, some of whom are Tea Partyers, and fears that complicating Paul's Senate run could put her in danger.

Meanwhile, in news that is slightly more relevant to the question of whether Rand Paul should represent Kentucky in the U.S. Senate, Ben Smith reports that Paul just might not know all that much about Kentucky. In addition to being unclear about why Harlan County is famous (and confusing Hazard County, Ky., with the fictional Hazzard County, Ga.), Paul apparently told Sean Hannity that he expected beer to be thrown at him at the annual Fancy Farm Picnic in Fancy Farm, Ky.

But as Smith notes: "The picnic is put on by a Catholic parish and no alcohol is served. And, in fact, the county where it's held is dry." Whoops!