The man who caught on fire

A power outage on our block left me hot and miserable. Then the repairman arrived, and real tragedy struck 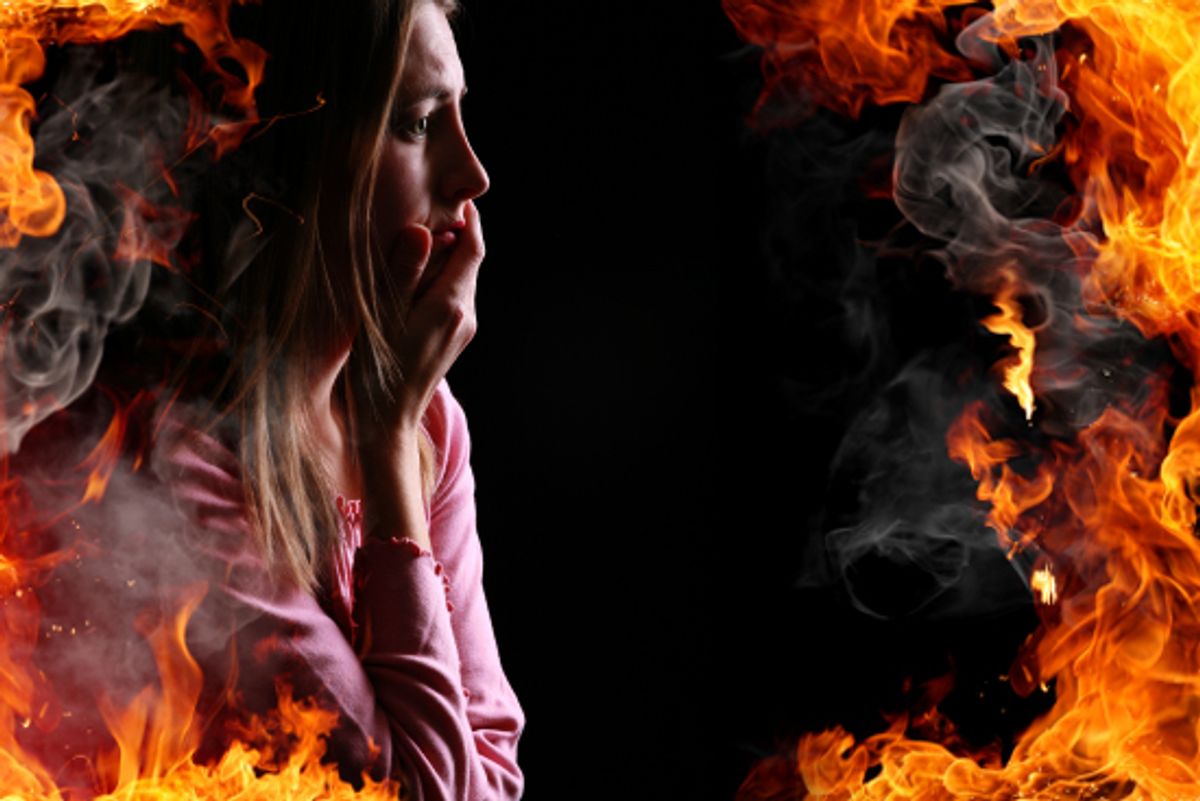 It was nearly 100 degrees in Washington, and we were moving into hour seven without power. I was draped across our couch, trying to breathe methodically, as if by slowing my breath I might magically cool the air. Our dog and two cats lazed on the wood floor of our small bungalow, panting. I thought of the refrigerator, full of recently purchased groceries that had probably all spoiled.

In our backyard, my boyfriend, Drew, held a flashlight for the lineman trying to restore service to our block -- two hours later than the company had promised.

Drew poked his head in the door: "Do you want to come out to watch? It's kind of interesting."

I had called the power company no fewer than five times that day. When would this be fixed? I said. We have elderly people on our block, you know. And a newborn. And animals.

An operator said the lights would be on by 9 p.m. Now nearly midnight, I was miserable. ("That time was an estimate," one operator told me. Well, obviously.) We decided to seek sanctuary in a cool, air-conditioned Hilton just a mile up the road. I was collecting a small overnight bag and Drew was folding his suit for work the next day into a garment bag when it happened. The explosion.

The boom was so loud that I didn't process what it was at first. I saw the symptoms before the cause made sense: Fire curled into the night sky. Sparks flew over the front of the house. A crackling sound. The leaves on the trees began to burn.

And then I heard him groan. A moan so booming and anguished it was as if he were right next to me. The transformer had blown up in the lineman's face, covering him with oil. He fell from his ladder into a neighbor's backyard. The fence outside our house was on fire. And so was the lineman.

I screamed to no one in particular, "Somebody call 911!" Drew was already on the phone, calmly explaining what had happened to dispatch.

Neighbors streamed from their houses. One even took pictures of the flames as they grew, fueled by the oil in the transformer, clipping at the fences and the grass behind our houses, teasingly close to destroying everything we owned. I couldn't see the lineman, although later, I learned two neighbors ran from their homes and rolled the man on the ground, putting out the flames. But in the middle of the confusion, all I knew was that I could hear the cries -- and then, suddenly, they stopped.

I walked the dog to our neighbors across the street, an older couple who have lived on the block for decades. The wife of a retired Virginia firefighter, she rubbed my back as I clutched my side; I started to feel sick. "It's OK, baby," she said. I sat in a chair in their darkened living room and stared at their whirring fan; their side of the street had power. At my feet, the dog still panted.

Drew came in and asked if there was anything I wanted from inside the house. My mind sputtered. I tried to latch onto a possession of significant meaning. "My grandmother's pearls," I finally said.

In the days that followed, I would come up with a list of things I'd actually want salvaged if our 90-year-old home succumbed to fire. Photos of my parents as children. The memory box of items documenting my relationship with Drew. But in that moment, none of it mattered. Maybe it still doesn't. In my head, I could still hear the man's screams.

Firefighters put out the flames before they reached the house. The fence, though, was destroyed at its point of intersection, so that all four houses were exposed: dog toys, barbecues, sheds, lawn furniture.

That night, the lineman was airlifted to the local burn center as we headed for the Hilton. But once there, I couldn't fall asleep. I was wracked with guilt: Did I nag the power company too much? How could it be that, as the man struggled outside in the dark and heat to make us more comfortable, all I could think of was the food rotting in the fridge? I hadn't even greeted him. I hadn't offered him water. It was late and, we would learn, past the end of his shift. But I couldn't bear to leave the comfort of the couch.

At the Hilton, it was a perfect 68 degrees. In bed, I turned my head into the pillow and cried.

The lineman survived and, over the next few weeks, endured several skin graft surgeries. Along with our neighbors, I learned more about him: His name is Eric. He is a widower and the father of a young boy. He is a devout fan of the Philadelphia Eagles. At the prompting of the couple in whose yard he fell, our neighbors raised more than $9,000 for his care. We also got him a Donovan McNabb jersey.

Still I think of that night, every night, when I start to fall asleep. I think about the power outages that have been blighting cities all across the country this summer. I think about some hot and frustrated woman out there, impatient to return to her air-conditioned life, and the person working outside, late in the night, to make it so.

Jennifer Skalka is a freelance journalist based in Washington, D.C. She has been a staff writer for the Chicago Tribune, Baltimore Sun and Concord (N.H.) Monitor and has also written for National Journal, where she also edited a popular political blog during the 2008 election cycle.

Jennifer Skalka is a freelance journalist based in Washington, D.C. She has been a staff writer for the Chicago Tribune, Baltimore Sun and Concord (NH) Monitor and has also written for National Journal, where she also edited a popular political blog during the 2008 election cycle.