Obama's press secretary should stay home, nurse his cold and stop smearing the progressive base 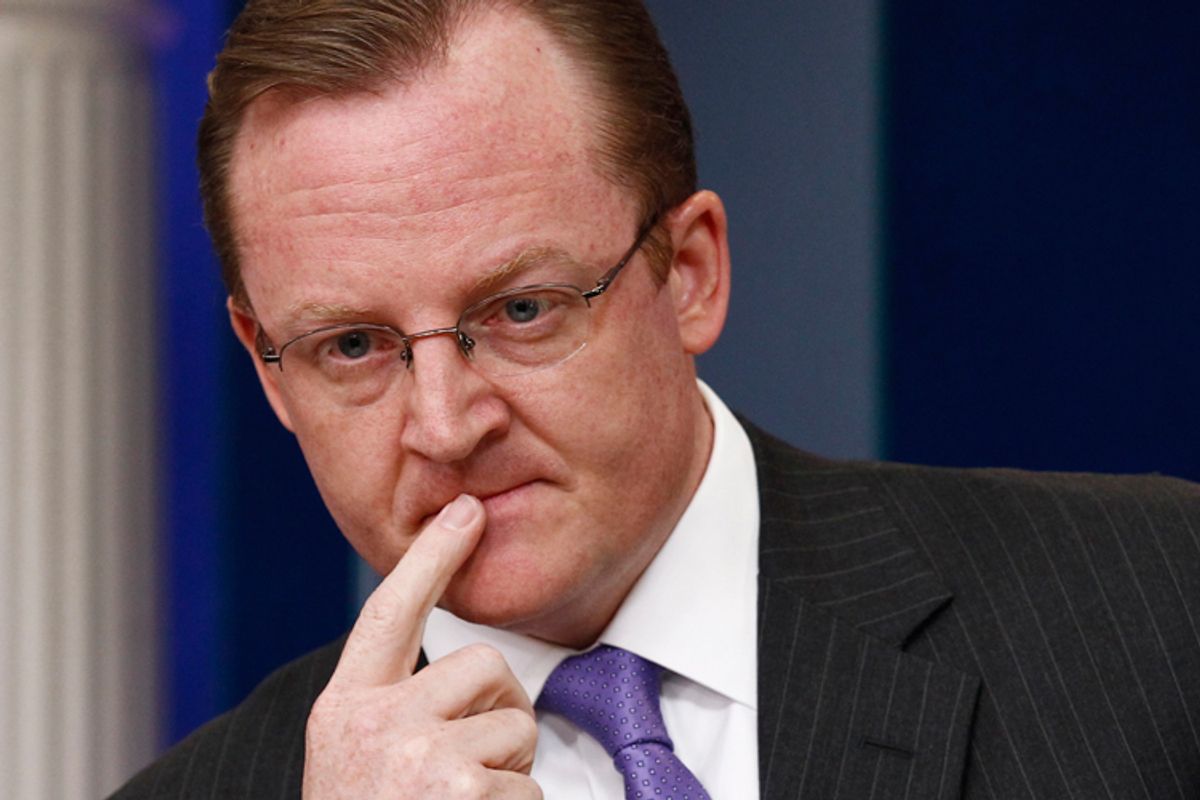 I've been trying to ignore White House press secretary Robert Gibbs' latest insult to President Obama's lefty critics, because I think what Gibbs is doing is destructive, and answering back angrily only gives the fire he started more oxygen. But there I go again, thinking like a member of the "professional left," trying to minimize the damage to the causes I believe in. Since Gibbs took the opportunity Wednesday to walk back his statement Tuesday walking back his original slur (yes, it was that crazy), let me reply and be done with the issue.

Trying to lead by example, I'll start with a little empathy.  Gibbs has a bad cold, and maybe he's not thinking about this clearly. I hope he gets well soon. I also think he and the White House are entitled to criticize their critics, even to call them/us politically naive for demanding more progressive healthcare reform, financial reform and stimulus bills. One of their main complaints is irrefutable: Stymied by the Senate, Obama couldn't push through transformational legislation on its own. I've been on both sides of this debate, criticizing the White House for caving in early on healthcare reform, and then criticizing lefty critics who suggested Democrats should kill the bill because it wasn't perfect. We can argue for years over whether the president showed sufficient leadership to push Senate "centrists" to take more courageous stands, but no one can prove that an Obama who twisted arms like Lyndon Johnson could have gotten the votes he needed to pass better bills. I get that.

What's destructive in Gibbs' calculated rant is his choice of terms. First, by smearing "the professional left," he's suggesting that Obama's critics are somehow paid to criticize him, that they profit from it, that they're not doing it out of principle. It's on a par with labeling a constituency a "special interest." More disturbing was his idiotic suggestion that those critics "will be satisfied when we have Canadian healthcare and we’ve eliminated the Pentagon." As I said Tuesday, that's the exact way Republicans smear Democrats and liberals – as socialists who hate the military – and it's crazy for the president's press secretary to use the Richard Nixon/Karl Rove playbook against folks in his own party. I finally finished Rick Perlstein's "Nixonland," which details all the dirty tricks the GOP used in 1972 to set Democratic primary rivals fighting among themselves, and I wondered (mostly in jest) if Donald Segretti's "ratfuckers" had been messing with Gibbs' cold medication.

I also wondered if Gibbs was in the White House doghouse for his intemperate remarks; now that he's said he stands by them, I've got to think others high in the administration share his views. Could the team behind Obama's remarkable 2008 campaign really be clueless enough to believe kicking a portion of the base is going to help them with independents? Will Ed Schultz be their Sister Soulja? I don't agree with Schultz's urging Democrats to stay home in November, but if the White House thinks MSNBC is its biggest political problem, they need to switch the channel to Fox for a while.

Writing Wednesday, my friend Gene Lyons mostly agrees with me about the destructiveness of Gibbs' blast at the left, although he suggests some folks deserve it, and (like a lot of liberals) he singles out FireDogLake's Jane Hamsher, particularly for supporting Bill Halter's primary challenge against his home-state Democratic Sen. Blanche Lincoln. I defer to Lyons about Arkansas politics, but to me, blasting progressives for daring to challenge centrist Democrats seems unfair. In fact, during the healthcare reform debate, I criticized the left for railing against Blue Dogs without a strategy to elect more progressive Democrats in those states. If lefties think Democrats could do better than Blanche Lincoln in Arkansas, or Ben Nelson in Nebraska, or Michael Bennet in Colorado, they should do the work necessary to prove it. In two of those three cases, they tried and failed, but I can't attack them for trying. Yet White House "sources" went out of their way to trash unions for backing Halter the day after that primary, and Gibbs' rant seems like more of the same.

Gibbs' maneuver was particularly awful because within the progressive base, it's set off (or maybe just worsened) squabbling between those who can't tolerate any criticism of Obama, and Obama critics who are, sadly, feeling even more justified in their skepticism of the White House thanks to Gibbs. I think Mike Lux does the best job of explaining the angst on both sides – and why it's politically destructive to have Democrats fighting among themselves on the eve of important midterms. I'm just hoping Robert Gibbs comes out tomorrow and says he was sick and feverish and it was the Nyquil talking. Or else the president is going to have to get his press secretary a press secretary, because someone else should be in charge of White House messaging.