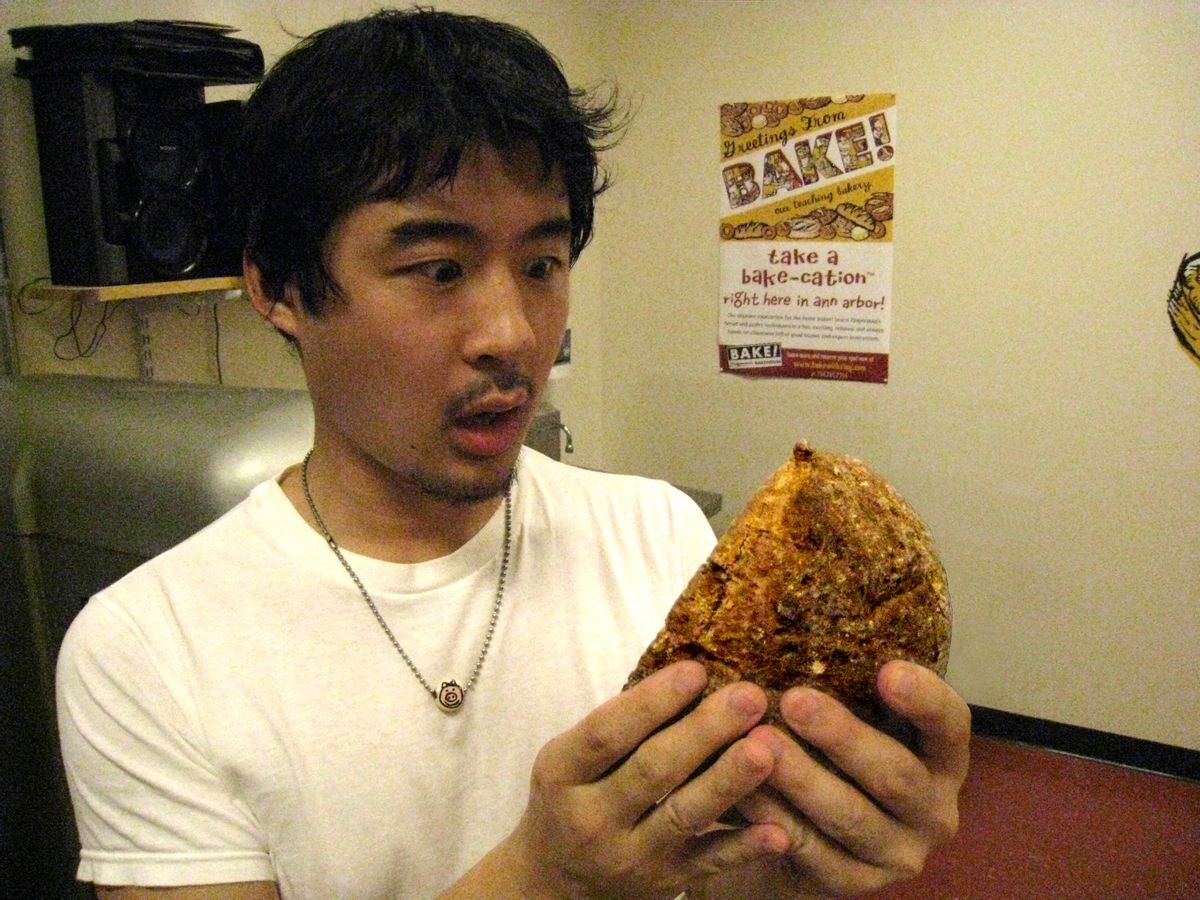 I've always said that I'm a cook, not a baker, and my insistence on it is for several good reasons and one really bad one. I'm disorganized and impatient, and I overlook details. But the real problem is that I'm also intimidated, fearful of all the ways I might screw up a dough and not know it until I pull wonky bread out of the oven. I'm afraid of the unknown.

But there are reasons to overcome this petty fear: Baking is totally sweet. It's chemistry and biology and craft and art. It's making flour and water come alive with yeast. It's a meditation with your hands, and it's so beautifully physical. Much of serious cooking is athletic, but on my first day of baking school, I watched a small woman work a 20-foot-deep oven with great power, pushing and pulling loaves with a peel twice her height, making it fly, and it was like watching an event at a track meet. It was mesmerizing, and before it was time to leave she looked to me like St. George lancing a dragon.

So step 1 in joining this crazy brotherhood of bakers is getting over the fear of the unknown; it's getting a few easy wins under the belt to develop a little confidence. And the first lesson in baking school, quick breads, was meant to do just that.

Quick breads are breads that are made with chemical leaveners -- baking soda or baking powder -- and, because they can go from raw flour to delicious food in minutes, you usually come across them on the breakfast table: biscuits, muffins, even pancakes and waffles, technically. But for bake-phobics, their ease and quickness are also important because you can reliably turn out superb products in a hurry, giving you an inkling of your hidden talents. "Hey, why not me?" I said, looking at my loaf of gorgeously browned, sweet-smelling Irish soda bread.

I know, I know -- Irish brown bread is not everyone's idea of a great time, dense and with a harsh metallic taste in bad versions. But the recipe I'll share with you below is really striking, especially if you're an unbeliever: full of nutty, toasty flavor, an undercurrent of sweetness, and a tender crumb that doesn't need butter, but definitely wouldn't kick it out of bed either. It's fantastic with dinner or on its own.

While making it or any other quick bread, here are some key tips to keep in mind:

Don't overmix: Unlike other styles of bread, baking soda- or baking powder-raised breads really don't want to be mixed very much once you add the liquid to the dry ingredients. Follow the particular recipe, but usually just enough agitation to get the dry ingredients moistened is enough, and leaving a few lumps floating around is usually OK. A light hand keeps the final product tender; an overmixed batter makes it dull, dense and tough.

Have your oven preheated and be ready to bake immediately after mixing: Bread rises when gas builds up inside it, trying to escape the dough (heat causes the gas to try to escape with even more force, so it puffs the bread even more while baking). In a quick bread, that gas is the carbon dioxide that is released once an acidic ingredient hits the baking soda (or water hits the baking powder). The reaction is instant, so if you leave the batter or dough sitting around unbaked after it's mixed, sooner or later it's going to run out of gas.

The difference between baking soda and baking powder: Baking soda reacts with acidic ingredients (lemon juice, vinegar, yogurt, buttermilk, etc.) to release carbon dioxide, which will lift and raise dough. Baking powder is mostly baking soda, but combined with a powdered acid -- cream of tartar. When it gets wet, the baking soda and the acid combine and react to one another, so there's no need for an acidic ingredient in the recipe. Note that both of these leaveners will eventually lose their effectiveness as they sit in your pantry. To check if your stash still works, add some lemon juice or vinegar to a bit of baking soda, or some water to a sample of baking powder. If they bubble and fizz, they've still got some power.

An imperfect but reasonable substitute for buttermilk: When you see buttermilk in a quick bread recipe, it's usually there to react with baking soda. If you don't happen to have buttermilk, you can make a functional substitute by stirring one tablespoon of lemon juice or vinegar to a cup of milk and letting it sit for a few minutes. Substitute this mixture in equal amounts with the buttermilk. The flavor won't be quite the same, but it'll do what you need it to do.

Recipe courtesy of and adapted from Zingerman's Bakehouse