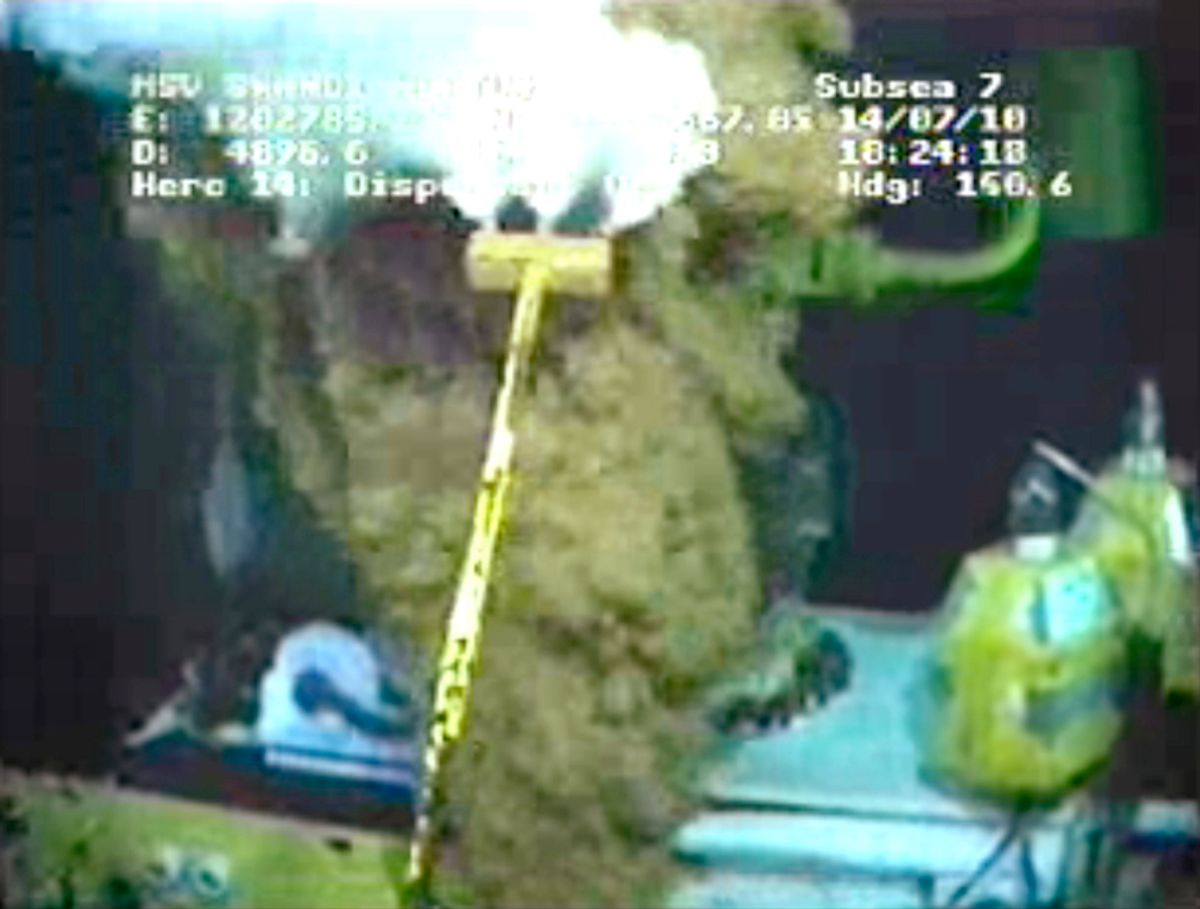 Work continues on equipment at the site of the BP oil well leak in the Gulf of Mexico, in this image captured from a BP live video feed July 14, 2010. BP Plc on Wednesday started a crucial test on its ruptured oil well in the Gulf of Mexico that it hopes will lead to halting the flow of crude that has polluted the sea and shoreline since April. REUTERS/BP/Handout (UNITED STATES - Tags: DISASTER ENERGY BUSINESS POLITICS ENVIRONMENT) FOR EDITORIAL USE ONLY. NOT FOR SALE FOR MARKETING OR ADVERTISING CAMPAIGNS (Â© Ho New / Reuters)
--

Most of the coverage of the BP disaster lately has focused on where all the oil is or is not. But this new piece in Mother Jones on the true scope of the disaster does a good job explaining why the oil is really just one of several destructive substances in play in the Gulf.

Few people realize that some 40 percent of what spews from the Deepwater Horizon well is methane, the primary component of natural gas—a dangerous greenhouse gas and a toxin to most life. ...

Nevertheless, around the spill site, [biogeochemist David] Valentine and his colleagues found clouds of dissolved natural gas at 100,000 times the normal density and at depths of more than 2,500 feet. They also found that little of the gas seemed to be reaching the air. Which is good news for the atmosphere, but probably bad news for the ocean [32]. That's because the methane may also be powering up blooms of microbes that eat methane but use up the oxygen in the water as they do so—causing dead zones [33] where most life cannot survive.

And the toxic dispersants:

"Oil is toxic to most life," says [conservation specialist Rick] Steiner. "And Corexit is toxic to most life. But the most toxic of all is oil that's been treated with Corexit. Plus, dispersants may well kill [27] the ocean's first line of defense against oil: the natural microbes that break oil down for other microbes to eat." The EPA has never seriously examined Corexit's effects on marine life."

And the drilling fluids:

Euphemistically called muds, these heavy fluids are pumped into wells to keep the highly pressurized oil and gas from exploding upward. BP's drilling muds have been pouring out of the wellhead, along with 30,000 barrels added in its failed "top kill" and other efforts to plug the leak. Along with oil, methane, methanol, and Corexit, drilling fluids add their own frightening recipe to the disaster: arsenic, lead, mercury, cadmium, barite, fluoride, chrome lignosulfonate, vanadium, copper, aluminum, chromium, zinc, radionuclides, and other heavy metals.

The whole story is worth a read.