Obama should be annoyed by the "professional left"

But that doesn't make it politically smart for his spokesman to say so! 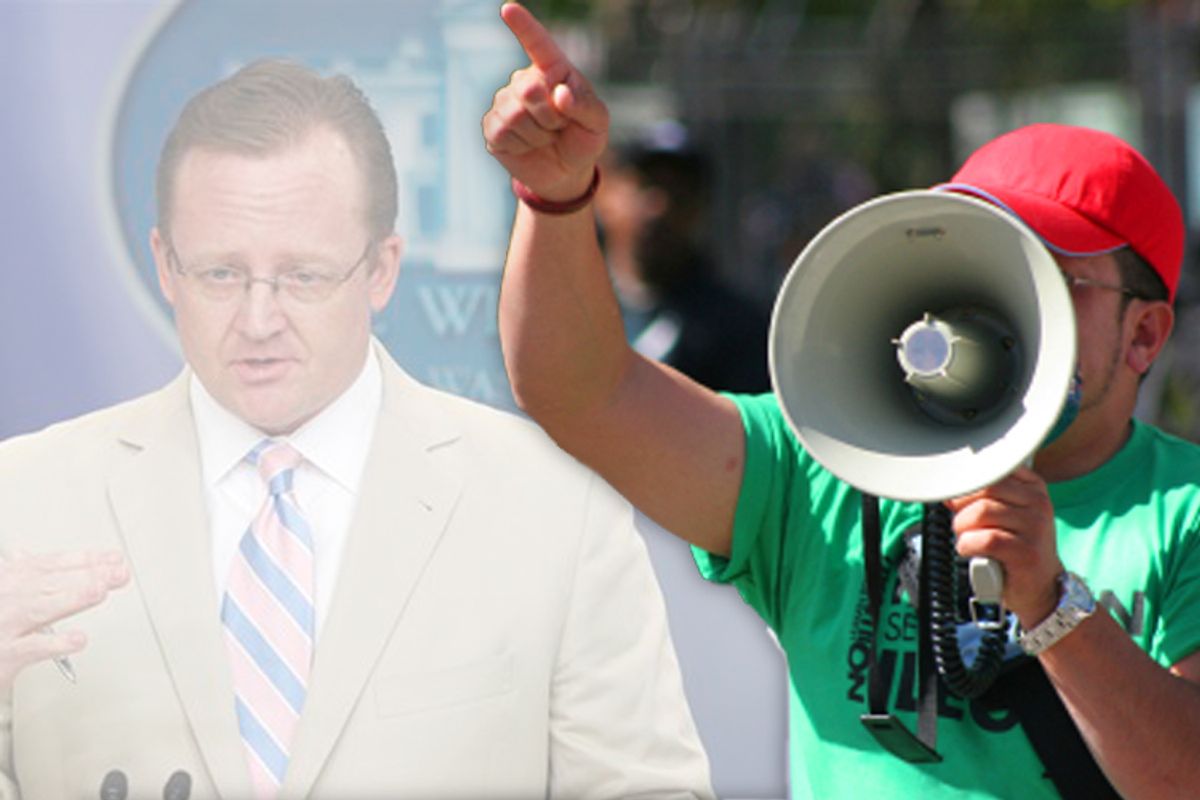 If nothing else, White House press secretary Robert Gibbs' recent attack on the White House's liberal critics demonstrates why frankness often backfires in politics. Speaking with a reporter from the Hill, Gibbs lampooned President Obama's Democratic detractors in unfortunately sharp terms. His remarks sounded more like something a White House loyalist might say after hours in a bar than in a formal interview.

When he hears Democratic purists compare Obama to George W. Bush, Gibbs complained, "Those people ought to be drug tested." People who accuse the administration of cutting too many deals with so-called centrists on issues like healthcare "wouldn't be satisfied if Dennis Kucinich was president."

The Cleveland congressman and two-time failed presidential candidate pretty much defines the Democrats' left boundary. Praised by such luminaries as Ralph Nader and Gore Vidal, he won no primaries in 2004 or 2008. But what does Gibbs gain by lampooning him?

There's more in the same vein. Critics on what Gibbs called "the professional left," he maintained, will only be "satisfied when we have Canadian health care and we've eliminated the Pentagon. That's not reality."

Concise, memorable and all too true. I've long referred to the perfectionist wing of the Democratic Party as the "anti-gravity left" -- educated idealists who confuse the American electorate with the inhabitants of such enlightened precincts as Berkeley, Calif., or Northampton, Mass. They're living examples of the aphorism Bill Clinton borrowed from Voltaire about letting the perfect become the enemy of the good.

According to the Hill, the "White House, constantly under fire from expected enemies on the right, has been frustrated by nightly attacks on cable news shows catering to the left, where Obama and top lieutenants like Chief of Staff Rahm Emanuel have been excoriated for ... moving to the middle and bargaining on health care reform, as well as the financial regulatory overhaul and even the $787 billion economic stimulus package, which some liberals said should have been larger."

On cue, professional lefty Jane Hamsher at Firedoglake.com showed her mettle by immediately excoriating the White House for cutting "sweetheart deals with the pharmaceutical industry in exchange for political patronage. ... The problem is not that he's fighting corporate America and losing. The problem is that all too often, it's obvious that he's fighting for the other side."

Got that, Tea Party patriots? To the "netroots" left, Obama's not a socialist, he's a corporate sellout.

Hamsher helped lead the charge to defeat Sen. Blanche Lincoln in the Arkansas Democratic primary -- a doomed effort whose main effect was to render her campaign dangerously low on funds heading into a November race against a cookie-cutter GOP opponent the Firedoglake contingent can be certain would never meet them even halfway on any substantive issue.

Sen. Lincoln risked her political career by voting for cloture on Obama's healthcare bill -- less-than-perfect legislation that's nevertheless the most far-reaching social reform since what came out of the 1960s. I'd have preferred "public option" myself. Shoot, in theory, I'd back a Canadian-style (or Medicare-style) single-payer system. Alas, so fundamental a change in the American social contract was never remotely possible.

Anybody who blames President Obama for that political fact, or who mistook him for anything other than a pragmatic centrist during the 2008 campaign, has only him- or herself to blame.

Again, to me, this is an easy one. Marriage is two things: a civil contract and a religious sacrament. Democrats should be about explaining that every citizen has a basic constitutional right to enter into a legal contract with anybody else, but that here in America, the government doesn't tell churches what to believe. Over time, irrational fears will subside. As there's zero chance of Congress voting on gay marriage, the White House shouldn't talk about it at all.

Iraq and Afghanistan? Well, if I described American engagement there as military and geopolitical "Tar Babies," bequeathed to Obama by the Bush administration, somebody would call me a "racist," the universal term of opprobrium on the professional left. So perish the thought.

Everybody with political sense knows what President Obama's real political problem is: the stagnating economy. I'm with New York Times columnist and Nobel Prize-winning economist Paul Krugman: The White House's politically timid $787 billion stimulus package was about half as large as it needed to be, and there was never going to be a second chance to get it right.

But that was then; this is now. The Democrats' biggest worry come November is low turnout among party loyalists. It's hard to see how blasting the White House's annoying left-wing critics helps.

In sum, Gibbs may be half-right. But he should also shut up.