Airline workers feel battered and cheated, passengers are scared and uncomfortable. It's an explosive brew 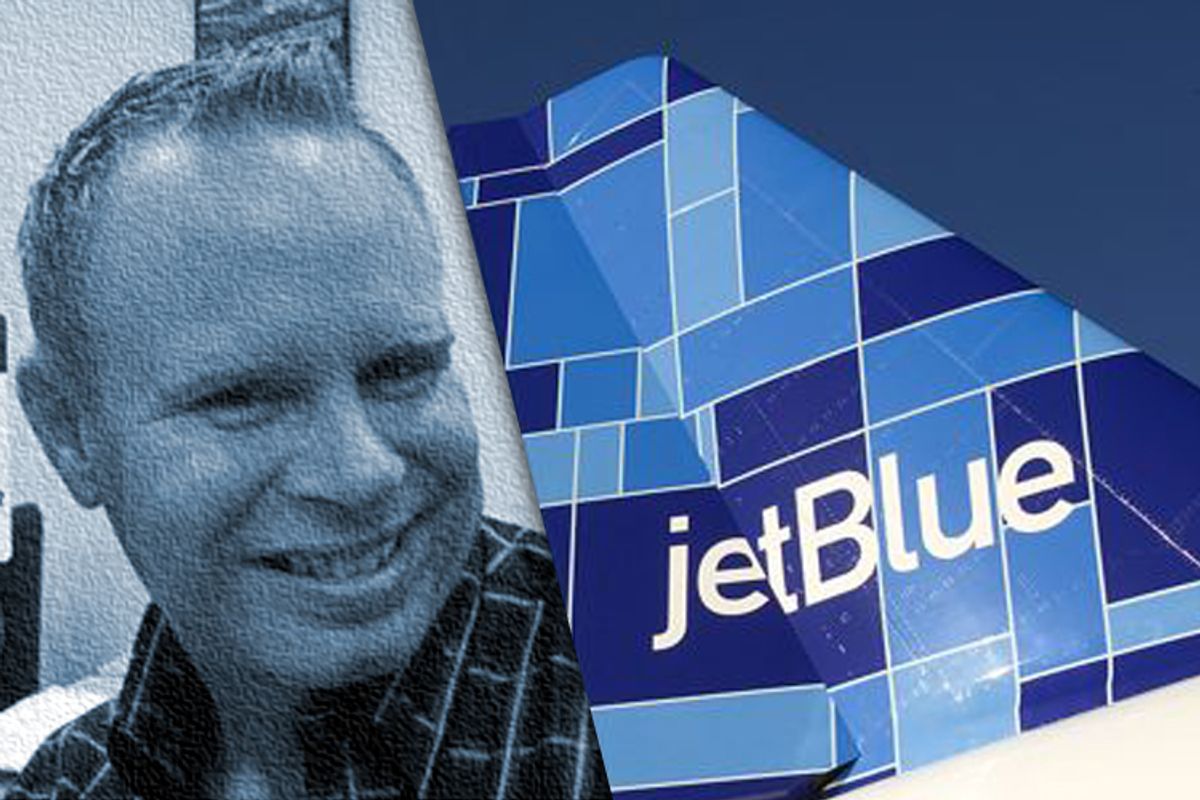 The story of Steven Slater, the renegade JetBlue flight attendant who slid his way into infamy, is a strange sort of commentary on the stresses of air travel -- stresses that affect frazzled fliers and airline personnel both. (Ironically, this is something I touched on just a couple of weeks ago in my own story -- the one about Angry Dude and Lulu the Loafing Stewardess. The Slater incident, though, with its blogosphere-perfect theatrics, has millions of people talking.)

Let's take the airline worker first. Over the past decade crew members have seen wages fall by as much as 40 percent. Benefits have been slashed, pensions gutted. A certain occupational disillusionment has crept in, leaving many employees feeling battered, cheated and worried about the future. As for flight attendants specifically, I cannot speak personally for the job's many challenges, protected as I am, so to speak, by the flight deck door. But consider for a minute what it is that flight attendants do for a living: Their primary responsibility, as we all know, is one of safety. In practice, however, the bulk of what they do revolves around managing and supervising a very large number of suspicious, agitated, uncomfortable people -- some of whom are any combination of intoxicated, belligerent and scared out of their minds. The occasional Steven Slater should hardly surprise us.

When it comes to passengers, I asked the other day, rhetorically, why it is that so many people tend to lose their minds in and around airplanes. What is it about flying that brings out the worst in us (something David Sedaris explores in a recent issue of the New Yorker)? The answer, I think, is straightforward enough -- a blend of uncertainty, physical discomfort and distrust: Flying is something that almost everybody takes part in, yet very few people truly understand. It is mysterious and, to hundreds of thousands of passengers, downright frightening. Myths and fallacies dominate; truthful information (for those who don't read this column) is extremely hard to come by. On top of this, carriers are terrible communicators and have a self-defeating habit of stoking rather than alleviating people's fears and suspicions. Last but not least are the crowds, noise and security lines of the typical American airport, not to mention the lack of creature comforts found in the average economy-class seat. Taken together, it's a rather explosive brew.

I can argue, as I have in this space many times, that fliers are spoiled and unreasonably demanding. They want and expect dirt cheap fares, with planes going everywhere, all the time. This has created a system that in one way is ridiculously convenient, yet logistically and financially stressed to a breaking point. You shouldn't expect flying to be anything more than it is.

But they do, and maybe that's human nature. It's hard not to empathize. I'm as romantic as it gets when it comes to flying, an advocate for sure, but I too often find myself stressed and angry. With respect to so-called air rage, when passengers become disruptive or even violent, I submit these incidents are more noteworthy in their absence than in their relatively limited presence. In a country where 2 million people fly every day, each of them enduring their share of hassles and indignities, it's something of a small miracle that more of them aren't making headlines.

Not that such behavior is excused or justified, regardless of whether you're passenger or crew. It's curious that in the wake of the JetBlue story, virtually all of the focus has been on Steven Slater. How about the gentleman who incited this whole affair by refusing to sit down, then swearing at a crew member?

As for Slater's role, what can we say? He's only human, and what he pulled off was, on some level, everybody's fantasy. Just the same time, it was shameless and undignified.

And whether because or in spite of that, it got Slater his 15 minutes of limelight. This is a story that made headlines in Sweden. Sweden! I asked why it is that so many people tend to lose their minds in and around airplanes? I could ask the same question of the media. I know that the spin cycles are brief, but is this really such a compelling story? And I expect that JetBlue's competitors can only look on in a state of bemused jealousy. Once again the carrier demonstrates its uncanny knack for turning what should be an embarrassment into positive publicity.

We're reminded of the strange saga of JetBlue Flight 292, the Airbus A320 that made an emergency landing in Los Angeles in 2005 because of a tire problem. Moments after liftoff from Burbank, Calif., cockpit indications revealed Flight 292's forward landing gear had not properly retracted. A low-level fly-by of the control tower would confirm the front tire assembly was cocked at 90 degrees. Unable to realign the twisted gear, the crew would be forced to make an emergency landing with the tires stuck sideways.

The pilots and JetBlue's dispatch team agreed to a diversion to Los Angeles, primarily to take advantage of LAX's long runways. But first came the matter of the plane's gross weight, which was several thousand pounds above its maximum allowable heft for touchdown. The A320, like other small, limited-capacity jetliners, does not have fuel dump capability. This meant about three hours of leisure flying over the Pacific until the poundage was down to the appropriate amount.

Those three hours are what allowed this relative nonevent to be catapulted into a full-on network spectacle. The California news outlets, out and about in search of the usual car chases and traffic accidents, had only to tip their cameras upward to catch the hapless Airbus as it circled. On board, 146 souls readied for what, at least according to the commentators, could very well be a devastating crash. Grown men in the passenger cabin began weeping. Others scribbled goodbye notes to loved ones. Words like "terrifying" and "harrowing" would later show up in interviews with those who "survived." Those of us who knew better weren't as alarmed. We saw a jetliner with a mildly threatening problem preparing for what would surely be a telegenic but perfectly manageable landing. The chances of such a maneuver resulting in fatalities were at worst extremely slim.

As it happened, the plane touched down smoothly on its main tires, the nose gently falling as speed bled away until the wayward forward gear, unable to defy gravity any longer, scraped sideways into the pavement, decelerating the jet in a brief rooster tail of sparks. Once it came to a stop, the doors were opened and crew and passengers were escorted uneventfully away. There were no injuries.

As if the live-action saga hadn't been enough, the media spent the next three days choking on its own hype and melodrama, showing slow-motion replays, interviewing passengers, and generally giving JetBlue all the free advertising it could possibly hope for. The New York Post called Capt. Scott Burke "America's newest hero." The Daily News led with "Nerves of Steel," and went on to detail Burke's "heroic flying feat" complete with a photograph of the 46-year-old sitting with his wife and dog.

We should all be so unlucky.