What Carter-bashing tells us about Bush-bashing

Will a new generation of Bush-bashers be deriding the 43rd president at the 2036 Democratic convention? 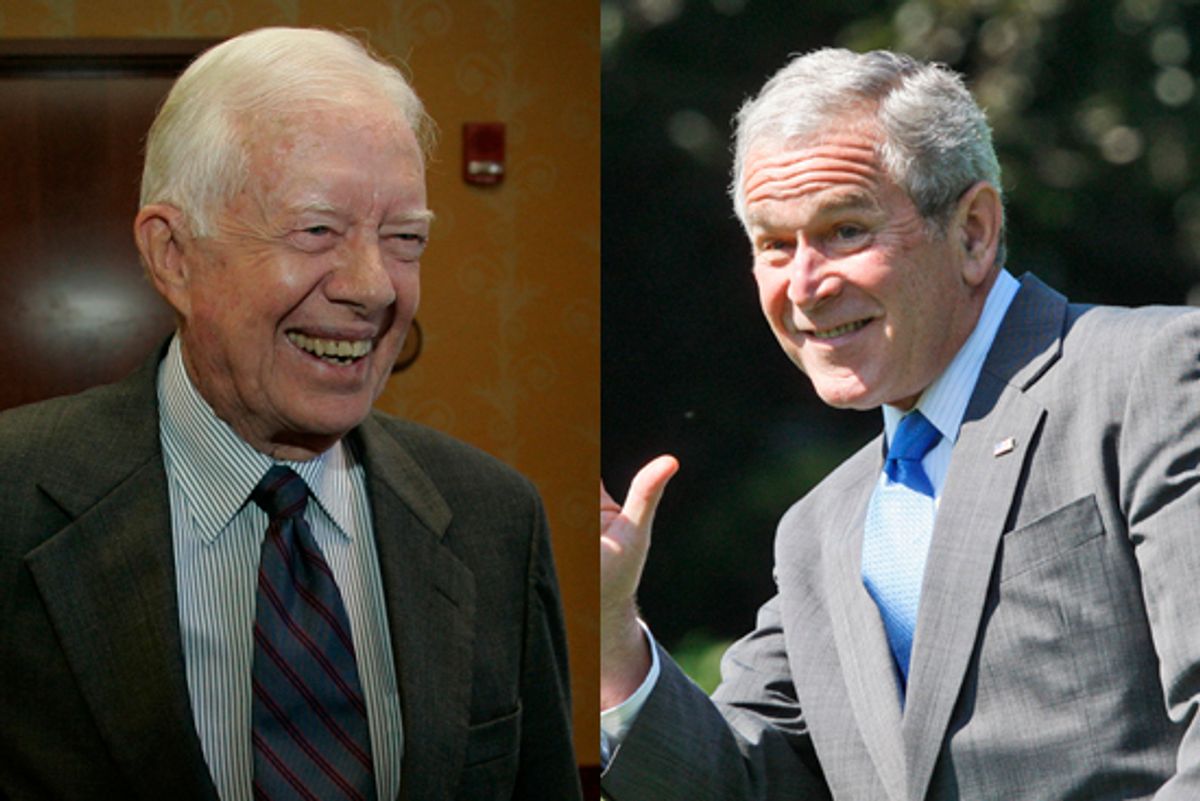 In a Hardball segment last night on Democrats' efforts to resurrect the Bush bogeyman, Chuck Todd noted that Republicans once played the same game with Jimmy Carter, backing it up with Carter-bashing clips from the 1984, 1988 and 1992 Republican conventions.

This is quite true. But the story of the GOP's Carter attacks is actually a complicated one, simultaneously providing today's Democrats with a hopeful example and a cautionary tale.

Carter and Bush, of course, left office under similar circumstances: feeble economy, brutal job approval ratings, sagging national confidence, and so on. And they were both replaced by charismatic leaders, Ronald Reagan and Barack Obama, whose inaugurations spawned widespread public optimism.

But when the economy worsened in 1981 and 1982, Reagan's popularity wore off -- just as Obama's has deteriorated in the face of strikingly similar unemployment numbers. Which is why, as they confronted grim midterm election outlooks, they both took to invoking their unpopular predecessors on the campaign trail.

This brings us to the first lesson from the GOP's Carter-bashing: Running against the guy you replaced, no matter how unpopular he was, just doesn’t work in midterm elections -- especially when the economy is in the gutter.

"Our critics are saying our economy is on its knees," Reagan said on the '82 campaign trail. "Well, you know something, if the economy is back on its knees, that's quite an improvement because two years ago it was flat on its back."

Those words fell on deaf ears, and Reagan's party was trounced in the '82 midterms -- even though polls showed that voters (especially independent voters) blamed Carter more than Reagan for the country's jobless rate, which was then over ten percent. You can see why Obama and the Democrats are so tempted to run against Bush today, with Americans still blaming him more than Obama for the economy. But, as I wrote last week, they're poised to learn the same lesson the GOP did in '82: It just doesn't matter.

Of course, that's not where the Carter story ended. The strategy worked for the GOP, or at least seemed to work, in 1984, when Reagan won a 49-state landslide. If anything, the GOP's Carter-bashing was louder then. The GOP convention in Dallas featured a parade of speakers attesting to the general awfulness of Reagan's predecessor ("It wasn't malaise we were suffering from," Jeane Kirkpatrick roared in the clip shown on Hardball, "It was Jimmy Carter") and the tagline of Reagan's famous "Morning America ad" offered a subtle slam of Carter: "Why would we ever want to return to where we were less than four short years ago?"

The Carter-bashing of '84 was different from '82, though, in that it sought to reinforce a positive message: that Reagan had delivered measurable results. In '82, the message had been primarily negative: Sure, things are bad -- but remember how much worse they were? In other words, Carter-bashing may have been just as futile for Reagan and the GOP in '84 if the economy hadn't turned around. And because the economy had so dramatically turned around, it may be that Carter-bashing didn't help the GOP at all in '84: Given the country's mood, almost any message would have produced the same landslide result for Reagan.

Likewise, you can expect Democrats to keep up the Bush-bashing well past this November, even if (when?) they suffer deep losses. They really won't have a choice. If the economy improves in 2011 and 2012, they'll want to compare the good news to the situation that Bush left behind. And if it doesn't and Obama's poll numbers are dangerously low, then they'll surely resort to scare tactics in '12, which will undoubtedly include plenty of reminiscing about life under George W. Bush and his Republican friends.

What's interesting about Carter is that even as the GOP spent the '80s shredding him, his personal popularity actually rose steadily. This was due to his high-profile humanitarian work, which reminded Americans of the basic decency that attracted them to Carter in the first place -- just as the unconventional nature of his post-presidency reminded them of a quirkiness they'd found appealing in 1976.

And by the early '90s, popular assessments of his presidency began to shift. With the country in a painful recession, Bill Clinton and the Democrats used the 1992 campaign to portray the Reagan-Bush era as 12 years of greed, scandal and profligate spending -- and voters bought in. By the summer of 1992, three years after he left office, Reagan's personal favorable rating stood at 46 percent, compared to a 48 percent unfavorable mark. Just 24 percent of voters said America was better off because of the Reagan presidency, while 40 percent said the country was worse off. By that point, Carter's popularity -- 63 percent in the same poll -- was significantly higher than Reagan's.

Republicans tried mightily to paint Clinton as the second coming of Carter, but the charge had little bite in '92. Democrats were confident enough to provide Carter with a primetime speaking slot at their convention, and when the campaign ended with Clinton's election, it seemed that Carter had gotten the last laugh over his Republican tormenters. And, indeed, the high-volume Carter-bashing was largely absent from the 1996 and 2000 GOP campaigns.

But there's a twist. As Will Bunch documented in "Tear Down This Myth," Reagan's poor early-'90s poll numbers panicked his hardcore fans on the right, who undertook a sweeping effort to repair The Gipper's image, transforming him into the god-like figure that conservatives now worship. The Reagan legend that the right now basks in employs Carter as its central villain: a thoroughly rotten president who nearly ruined America -- only for Reagan to ride to its rescue. This has spawned a new generation of Carter-bashers on the right, and it's once again common for national Republican leaders to trash the 39th president. But while the Carter-bashing of the '80s was intended for independents and swing voters, today's version is geared toward the GOP base. To bash Carter is to affirm the Reagan legend -- and to affirm the Reagan legend is to pander to the GOP base.

It remains to be seen whether George W. Bush will in this decade repair his personal image the way Carter did in the '80s -- or if a new generation of Bush-bashers will come to dominate the Democratic Party a generation from now. But we can bet on one thing: Just as Republicans didn't give up on Carter-bashing after a brutal 1982 midterm, Democrats won't be abandoning Bush-bashing after this November.