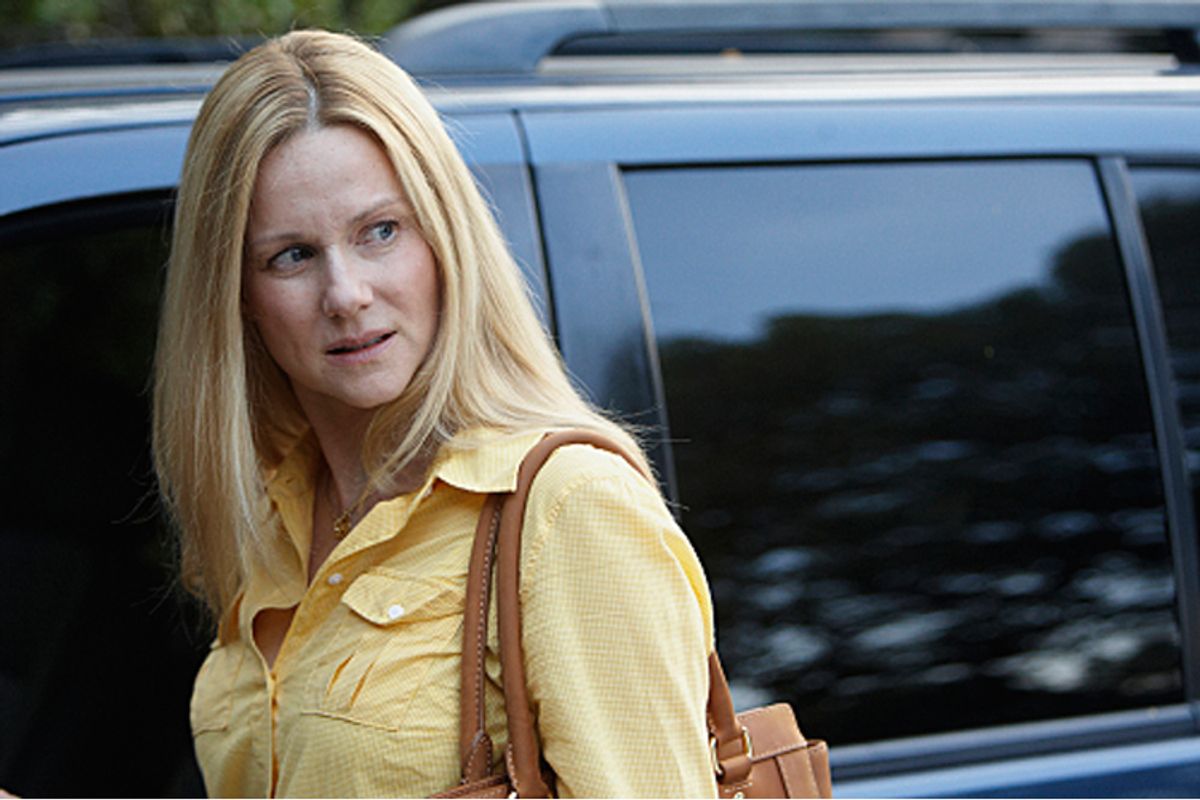 Cancer. I don't like typing that word. My sister goes to work every day and cuts cancer out of people's bodies, and I can't even type the word "cancer" without cringing. My sister looks people right in the eyes and tells them whether they'll live for another year or die in a few weeks -- and I watch shows about rich housewives for a living.

Now that we've established my relative worthlessness in the big scheme of things, I will tell you one thing I know beyond a shadow of a doubt: A comedy about cancer needs to be really, really funny. Otherwise, it will be awful. With "The Big C" (premieres 10:30 p.m., Aug. 16, on Showtime), all of the vital signs looked good from the start. You've got Laura Linney, an actress who has been easy to love ever since she charmed the world as Mark Ruffalo's weary older sister in "You Can Count On Me." You've got Oliver Platt, known for his ability to pump vim and vigor into other oddball premium cable shows like "Bored to Death" and "Huff."

And you've got a dying woman, which means lots of denial, lashing out, weeping openly, seizing the day. A death sentence offers boundless dramatic -- and comedic -- potential. Think Nate in "Six Feet Under," muttering, "My arm is numb. Numb arm! Numarm! Narm! Narm!" before he hit the floor. Terrifying, horrible, hideous ... and hilarious.

Unfortunately, Laura Linney doesn't come across as a dying woman struggling to save her own life so much as a really dorky PTA mom dressed up as a clown in order to bring a little cheer to the children's cancer ward. Having just been diagnosed with Stage IV melanoma, Cathy (Linney) is haunted by the specter of approaching death, yes, but she's also super-determined to do a goofy little dance and spray a little water out of her flower lapel into some poor leukemia patient's eye. She's going to smile quizzically and shrug and give you an "Aw shucks, what can I say, folks? I'm here for 18 more months!" (Da dum dum -- ch!) and what are you going to do? Laugh?

No. You're going to cringe and beg to be put out of your misery.

Now I'm going to make a wild, inappropriate guess here. I'm going to guess that either show creator Darlene Hunt or Laura Linney or both of them were given the following note at some point: "Lighten it up!" Maybe some test audience thought the story was too gloomy, too depressing, too focused on death. "Death? Yuck!" they said. "We don't want death. We want zany pot-dealer moms who shrug and slurp on frappuccinos! We want zany multiple-personality-disorder moms who shrug and toss back canned beer! We want zany nurse moms who shrug and pop prescription drugs and have affairs with their pharmacist buddies! But zany control-freak moms who shrug and get naked in the back yard, because they're about to die? No thank you! Cheer this mother up, give her a jaunty smile, a kick in her step! Make her flirt openly with her much-younger doctor! Make her scare the bejeezus out of her snarky teenage son! When she's sad about stuff, make it clear that she's also just feeling so lucky to be alive for another day! You know what this dying mom needs? She needs to smile more often! Haven't you read 'Crazy Sexy Cancer'?"

So here's Linney, smiling through every scene, cracking really funny jokes about only having a few months to live, jokes about as fun and lighthearted as an unexpected spray of water in your chemo-bloodshot eyes. Here's Cathy feeling pleased that she goaded her doctor into admitting that she has a killer rack. Here's Cathy eating only desserts and doing cartwheels in the hallway of the school where she teaches and getting a pool installed in her backyard and riding a bicycle built for two with a flower basket and streamers coming out of the handlebars. Kooky, unsexy cancer!

Cathy doesn't want chemo for her melanoma. She doesn't want any treatment that will only make her bald. She doesn't want to tell anyone she has cancer. She just wants to play practical jokes and set stuff on fire! She just wants to kick her husband, Paul (Platt), out of the house, because he's an overgrown kid, gosh darn it! She just wants to hang out with her crazy homeless-by-choice brother, the one who spends his life in various parking lots, yelling at people about how their SUVs are destroying the earth. Cathy's plucky, to-hell-with-it approach should be moving, but instead it comes off with all of the grace and ease of a grizzly bear in a ballerina skirt. Cathy titters. She sighs and squints. She giggles nervously and smiles in a pinched way.

But let's not blame this show's flaws on cancer. Cathy is a mom who suggests to her son that they "chillax" together. When he calls her gay, she yells anemically after him, "Don't use 'gay' like that!" "You're sooo not allowed to say I'm embarrassing," she warns her brother, Sean (John Benjamin Hickey), who spends every episode saying things like, "Enjoy your swirly chemicals!" and "Wake up and smell your $10 latte!"

Oliver Platt, on the other hand, succeeds at milking every oddly melancholic moment as Linney's husband. Paul rages at Cathy's inscrutability, he confesses his deepest secrets to a therapist, he misunderstands and becomes lustful and retreats and somehow Platt makes it all believable. We buy this guy as a real person, in all of his selfish, needy, self-pitying glory. Maybe the overgrown boy role is just easier to pull off, or maybe Platt is particularly great at walking that line between comic and tragic.

I really want to love Linney in this role, because she's a great actress and she does pull off about half of her scenes in "The Big C." But there's just something leaden and unnatural about the way her role is written and performed, as if someone is standing on the sidelines yelling "Smiles, everyone! Smiles!" the whole time. Because if you take the Linney we've seen before -- a little gloomy, a little shrill – and insert her into this picture, it works so much better. Instead, Cathy seems self-conscious in everything she does. She spends most of each episode grinning from ear to ear like the reluctant host of a sorority rush party, counting the seconds until she's free to get drunk on cosmopolitans.

On the page, "The Big C" is occasionally clever. But the mood of the actual show is all wrong. The timing is off. The heavy scenes are almost as badly timed and directed as the funny scenes, and those scenes that alternate between funny and sad only induce whiplash. None of the emotions in play feel remotely organic or nuanced or sweet. And by the end of the third episode, we understand exactly what we're going to see, over and over again, throughout the course of the first season: Beleaguered, denial-plagued smiley mom, man-child husband, insolent son, angry shut-in neighbor, angry overweight girl (played by Gabourey Sidibe from "Precious") trying to diet, angry radical brother. Simply putting one nutty character in a room with another nutty character does not a comedy make, yet that's what each scene of this show boils down to.

And that's a shame. Because "The Big C" could be a great show; it should be a great show. There are so many possibilities. Death brings out the best and the worst in everyone and everything, and it can be very funny -- just ask anyone who's dealt with the death of someone close to them. Instead, "The Big C" offers us the same stuff we've seen before from every cancer subplot on every TV show ever made: cute younger doctors, annoying cancer support groups, impulsive decisions and an interminable wait for the moment when our patient finally tells her family she's sick. "I'm here all year, performing at stage IV!" Cathy yells to an imaginary audience at the end of the first episode. "Come on, you've gotta give it up for me a little bit! It's kinda funny -- death comedy?" In this case, unfortunately, it's not.