This week in crazy: Dan Maes 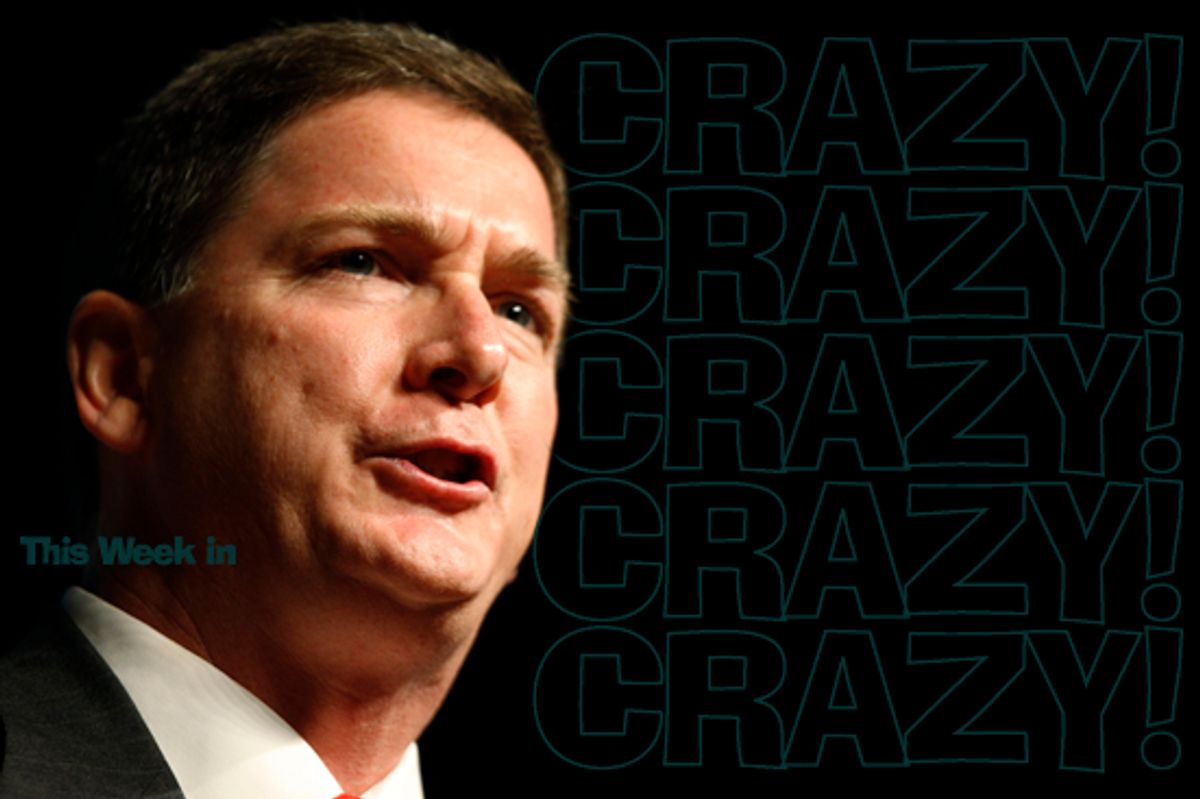 Dan Maes addresses delegates after he earned a spot in a runoff primary election against Scott McInnis to run as Republicans' candidate fro Colorado's governorship at the Colorado Republican State Assembly in Loveland, Colo., on Saturday, May 22, 2010. (AP Photo/David Zalubowski) (David Zalubowski)
--

It seems scarcely possible to be too crazy for a state Republican Party in 2010, but the Colorado GOP is now trying to muscle gubernatorial nominee Dan Maes off the ticket.

And what did Maes do to deserve such treatment, after his stirring come-from-behind victory over establishment hack Scott McInnis? Well, for one, he argued last week that a Denver bike-sharing program is part of a "well-disguised" U.N. plot to take away our sovereignty.

Maes is running against Denver Mayor John Hickenlooper, so it's understandable that he'd attack Hickenlooper's record. And, obviously, Hickenlooper's weakest point is his apparent desire to tear up the Constitution and replace it with a U.N. treaty, as evidenced by his support for bicycling more.

Maes knows that sounds "kooky," but:

Maes acknowledged that some might find his theories "kooky," but he said there are valid reasons to be worried.

"At first, I thought, 'Gosh, public transportation, what's wrong with that, and what's wrong with people parking their cars and riding their bikes? And what's wrong with incentives for green cars?' But if you do your homework and research, you realize [the International Council for Local Environmental Initiatives] is part of a greater strategy to rein in American cities under a United Nations treaty," Maes said.

Gosh! Four hundred red bikes available for rent, funded by donors and grants, does seem innocuous. But now that you mention it, it is probably the first step toward complete United Nations control of Denver.

After this delightfully Jack D. Ripper-esque bit of nonsense made its way around the national blogosphere, the campaign scrambled to "clarify" the bike statements. And, to its credit, Maes' spokesman did clarify that the candidate really thinks a bike-sharing program means that the mayor of Denver is "taking orders from the U.N."

"Those quotes were taken widely out of context," he maintains. "In the echo chamber that is the blogosphere, they've reached almost legendary status as a huge political gaffe. But it was really an off-the-cuff comment used as an example to illustrate a larger point -- which, of course, was completely thrown to the wind in the coverage."

What was that larger point? According to Strauch, "it was that a mayor or a governor shouldn't be taking orders from the UN. Using the B-Cycle program to illustrate that may not have been the best example, but that wasn't the focus of Dan's comments at all. He's not anti-bicycle, which is the way it's been made out -- that riding a bicycle is tantamount to bowing down in UN headquarters. He was talking about a very specific program Denver is enrolled in, and that's only one example of how that program is entering Colorado through Denver."

So, his point was not that a bicycle-sharing program represented an unconstitutional "strategy to rein in American cities under a United Nations treaty." His point was that ... the bicycle program wasn't the best example of said unconstitutional strategy to sign away our sovereignty to the U.N. Maes has nothing against bikes! He just thinks that sharing them brings us one step closer to One World Government.

(The candidate himself appeared on MSNBC on Monday: "The bike program in and of itself is fine," he said. Then, he said: "When the mayor signs on to a program that's sponsored by the United Nations, that should bring concern to people as to how that program may or may not be compatible with our state constitution.")

It's a credit to the craziness of Maes that Tom Tancredo -- no stranger to nuttiness -- has now inserted himself into the governor's race as an independent, almost certainly throwing the election to Democrat and international velocipede plot co-conspirator John Hickenlooper.

Of course, Maes is positive he'll win. He knows the real reason Republicans have had a nasty couple of election cycles, too: They've been too moderate.

"We don't have to pander to the middle anymore," he said to the Denver Post on Wednesday. "We've done it in the past, and we've lost doing that, and it's time to stop doing that."

And on Friday, the Post reported that Maes -- whose finances have been a mess -- asked an 83-year-old Republican activist for "more than $300" to help him pay his mortgage. Maes' brilliant response was to say that "he met Poundstone at her bank and she gave him $300 in cash as a campaign contribution." Which, sure, that makes sense. (The "contribution" does not appear in any of his campaign-finance reports.)

As for getting Maes out of the race? The Colorado Republicans know they don't have a shot at winning the race -- they just don't want Maes' craziness to sink all the rest of their candidates.