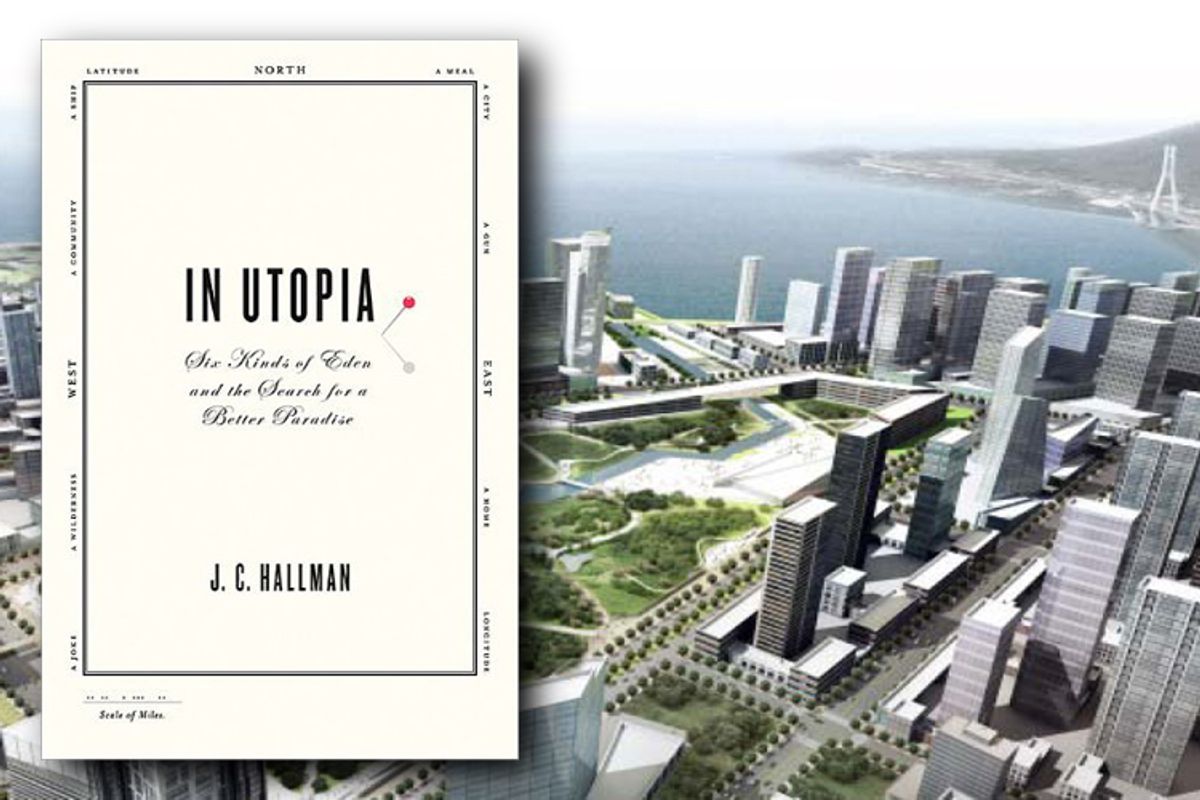 Off the coast of Korea, a utopian new city is rising. New Songdo City, which is slated to be finished in 2015, is the most expensive private real estate venture in the world. The city is being built on reclaimed land in Incheon Bay (site of the famous Korean War landing), and, when it is complete, will include the "world's largest twin tower," a 100-acre "central park," full city-wide integration into wireless technology (which one of its architects describes as "a municipal concierge service"), and groundbreaking levels of environmental sustainability (with wind turbine power and rainwater collection, it aims to be the world's first LEED-certified city). If all goes well, New Songdo will be the first of 20 privately built, fully wired and ecologically friendly utopian cities built on six different continents by the same group of architects.

New Songdo is  the most ambitious of the six examples in J.C. Hallman's "In Utopia," his new book about modern-day utopian projects. Fascinated by the decline in utopian thinking over the past century, and inspired by his own suburban upbringing, Hallman wanted to look at far-fetched ideas that are pushing the boundaries of our social imagination -- and, to varying extents, succeeding. Among other places, he visits The World, a cruise ship co-op with a permanent population made up of millionaires; Twin Oaks, a commune in the Virginia woods that supports itself by making hammocks; and the soon-to-be-built Front Sight, a town centered around universal gun ownership that bills itself as "the safest community in America."

Salon spoke to Hallman over the phone about the reasoning behind New Songdo, a project to introduce elephants into the United States, and what it's like to live on a rural utopian commune.

The Koreans recognized that there was no central hub or city for conducting business in northeast Asia, so they wanted to build this place that would make them a central marketplace. They brought in some Americans to build this city. It's distinct from, say, eco-suburbs or bedroom communities or master planned communities in that it’s multiuse. People actually live there, but they also work there. It's a relatively new thing, to build a city from scratch in quite that way and at this scale. They're promising full technological integration; lamps and tables and cars and everything will be computerized and on a network. You won’t even need a BlackBerry or a laptop.

Cities like Dubai and Abu Dhabi, which were also built up from scratch, seem much more dystopian than utopian. Everybody I know that's visited has come back saying that they're soulless and scary.

Yeah, I think aesthetically these cities are huge playgrounds, and I don’t think that Songdo has that in mind. Songdo is a much more modestly sized city -- with about 65,000 permanent residents and 300,000 workers. They conceived of it thinking a good bit about utopian history. I met the lead architect, and he and I chatted about Robert Owen and Charles Fourier.

Where does the term "utopia" come from?

The term itself comes from Thomas More's book "On Utopia," written in 1516, which describes a perfect society of Godless pagans in the New World. The idea was that it would shame Christian England into governing better than it was: "Look, if these pagans can do better than you, shame on you." It gave birth to an entire genre of literature. Now the term is retroactively applied to everything from constitutions to manifestoes, fiction and nonfiction.

Why the fascination with utopianism?

I grew up on a street called Utopia Road in a master planned community in California. In the same way that utopias tend to slip away from their original visions, so did some of the ideas about suburban planning, and by the time my particular community was born it was much more driven by profit. For me, growing up meant coming to realize that, right or not, the history of utopian thought has something to do with my own personal heritage.

In the book you write about a project called Pleistocene Rewilding, which proposed to reintroduce large animals -- including elephants and lions -- into North America in order to reestablish the ecosystem that existed several thousand years ago. Why didn't that take off?

Science shows that large animals are really good for ecosystems, but North America, since about 12,000 or 13,000 years ago, has been absent a lot of large species. You can't bring back extinct species, like giant ground sloths, but what you can do is bring back a surrogate that can perform the same ecological function. You can find an endangered species of rhinoceros that, in a certain part of New Mexico, might wind up performing the same ecological job as those extinct species. A number of projects like this, where animals are being reintroduced and having measurable positive effects, are happening all over the world: musk ox in Alaska, horses in Mongolia, and songbirds on various island chains.

Some of the media response to the project was sensationalistic, and some of the knee-jerk negative response to the idea can partly be blamed on "Jurassic Park." We now know that Michael Crichton was a right-wing propagandist who attacked sexual harassment legislation and climate change in his novels. "Jurassic Park's" argument, that you can't possible attempt to manage nature on this scale, is a classically dystopian response to a very utopian idea

You spent several weeks in Twin Oaks, a rural commune in Virginia. When I think of rural communes I generally think of cults and doomed '60s experiments in free love.

Twin Oaks is very much a commune model -- they prefer the term intentional community these days, in part because of the stigma that’s been attached to utopian ideas -- but it functions. They had some clothing optional parts of the grounds, and there was a fairly broad range of possibility in terms of monogamy and polyamory. But, you know, you were free. Unlike religious communities, you could do what you wanted. It’s been around for 40 years. It’s outlived its founder now and it’s thriving. I spent three weeks going through the process of becoming a member, and there were moments where I thought to myself, "Wow, this is a viable life."

There have been a number of large-scale attempts at utopian living in the U.S., but many seem to have failed pretty dramatically.

The most famous failed utopian community was Brook Farm. It started when a New York journalist named Albert Brisbane convinced what was already a pretty active community of transcendentalists near Boston to embark on an experiment. It included a number of well-known personalities, most prominently Margaret Fuller. Emerson dabbled with it. Thoreau famously quipped about it in his journals. Hawthorne visited for a while. There was this idea that the ideal living structure would be a large community hall with lots and lots of rooms and saloons and so forth, sort of like a grand hotel. Brook Farm tried to build one of these and it burned to the ground before they ever finished it. It became a symbol of their failure.

There was New Harmony in Indiana, based on the thinking of Robert Owen. It didn’t go the way Owen had originally planned, and Owen pretty quickly gave up and went back to England. And then starting in the 19th century, there was Oneida in upstate New York. They lasted a good long time, but not quite as long as Twin Oaks has lasted.

Where did they go wrong?

The vision doesn’t always live up to its promise. Sometimes utopias don’t fully account for the frailty of human psychology, and a lot of utopias are actively attempting to change human psychology to adjust for that very problem. I think that utopias fail for the same reason that a lot of plans can potentially fail, simply because you don’t always get it right the first time.

All of the houses, the residences at Twin Oaks, are named for utopian experiments of the past. So a very viable hypothesis is that Twin Oaks is managing because they’re cognizant of all of the utopian history, and they’ve striven to perfect it.

The New York Times ran an article not too long ago about the decline of separatist lesbian communities. Do you think other utopian communities are also disappearing?

I don’t think that they’re disappearing. I think that the commune idea has been sort of hovering beneath the radar. If you look around online, you can see evidence of there being a thousand intentional communities in the United States, or simply several dozen, depending on how you define them.

Utopian ideas don't seem to be plausible in the same way they used to be in the '60s, for example. There aren't that many people clamoring for "peace on Earth" these days.

Utopian thought fostered all of the isms -- fascism, communisms, socialism and capitalism -- that emerged in the 19th century. In the 20th century you had the duking-out of those four ideologies. Despite the utopian bubble of the 1960s the 20th century was a more dystopian era. Even just looking at novels, the 20th century is much more defined by dystopian writing.

The stigmatization of utopia has been such that people now think of them as idealistic, naive plans that always go awry. At the moment we have any number of major crises to confront -- whether it's global warming or overpopulation -- that require large-scale solutions. If the dystopian era of the 20th century leaves us with a hobbled imagination then we're not going to be able to imagine, let alone embrace, the kinds of solutions, utopian or not, that are going to be able to confront those at an adequate scale.

America is built on this utopian idea that you can remake yourself into anything you want, but it's also built on individualism, which tends to undermine a lot of big-picture thinking. Do you think Americans are more or less likely to be utopian than people in other parts of the world?

Well, I think now we’ve slipped into a dystopian mood. These days, it’s hard to imagine the United States taking on anything as grand a project as the New York City subway system or the interstate highway system. We have enough trouble reforming healthcare or pushing through financial reform.

But you really can’t escape the idea that the United States is itself a pretty utopian endeavor. A lot of the rights that are built into our founding documents are ideas that would have been considered fanciful and impossible when they were first written. The criticism of utopia is that it’s impossible to achieve perfection, so why try? But the impossibility of perfection does not absolve us from the path of pursuing a more perfect union. I think that in a nutshell gets at what I think utopian literature does -- it keeps you moving forward.