Why do Koreans eat hot food to cool down?

A steaming specialty is chicken soup for the sweltering soul. Both science and culture agree that it works 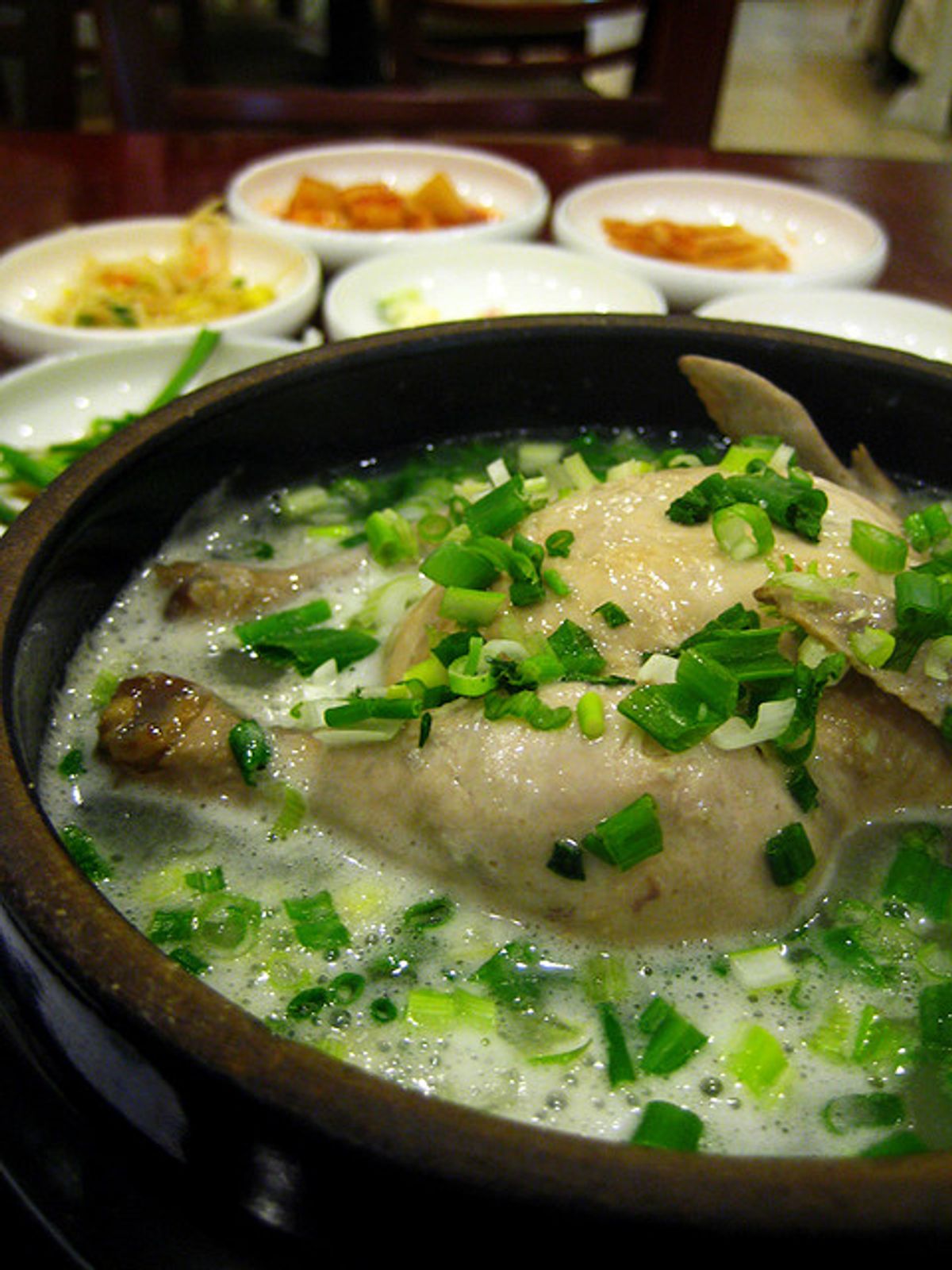 One August, at the tail end of monsoon season, I walked the streets of Seoul in search of a bowl of hot chicken soup. It was 101 degrees. I wanted to be a good Korean and a good foodie, engaging in the tradition of eating samgyetang -- a stuffed chicken served in steaming broth -- on the hottest days of summer. But as the heat and humidity threatened to overwhelm me, I had to wonder why my ancestors put me up to this.

Koreans revere their traditional foods, ascribing to them medicinal properties (some scientists floated the idea that kimchi could inoculate you from avian flu). Michael Pettid, professor of Premodern Korean Studies at Binghamton University and author of "Korean Cuisine: An Illustrated History" explains that the food philosophy is based on the idea of balancing one's ki, the flow of energy that courses through your body. "In East Asian cosmology, the idea of regulation of one's ki is vital to overall health. Food is an important means to keep one's ki properly attuned to the external environment," he writes.

There is a Korean saying: yi yul chi yul, meaning fight fire with fire. Want to beat the heat? Have some hot broth. "The practice of eating spicy or hot foods on hot days stems from the belief that one's ki is cool in the summer and to bring that in balance with the external environment spicy/hot foods should be eaten," said Pettid.

Samgyetang is a perennially popular dish in Korea, even though much of its original significance has become lost over time. Now, much of the conventional thinking centers around the idea of sweating out the heat -- consuming hot or spicy foods as a way of stimulating sweat, the body's natural cooling system.

And it turns out that it's not just the heat of samgyetang that may be effective. Ginseng and garlic are two key ingredients, but not just for their beloved flavors. Dr. John Thomas Pinto, a professor at Teacher's College at Columbia University, researches garlic's powers in the body. "Garlic," Pinto says, "has an anti-platelet effect. It will decrease blood clotting." Its anti-coagulant effects are bad for people going in for major surgery, but good for those who want to increase blood circulation. And ginseng, he explained, can cause blood vessels to dilate.

Those ingredients, in concert with the heat of the broth, would have an effect on blood flow, which in turn affects one's body temperature. Dr. Pinto says, "If you affect blood flow, that might also affect heat exchange in the body to allow sweating. Evaporation [of the sweat on skin] causes cooling."

I have to admit, though, in the thick of summer I more naturally crave the direct cooling of bing soo (Korean shaved ice) than a steaming soup. But on boknal, one of the days on the lunar calendar traditionally regarded as the hottest days of the year, there will be lines at samgyetang shops snaking onto the street.

I arrived at my destination, with my shirt clinging like a second skin. Looking for respite, I sat in front of fan, which only served to blow hot air at me. I called my order out to a beaming, bustling aunt-like figure (whom, of course, I addressed as auntie). She brought out a large stone bowl, kept blazing hot in an oven, with the soup at a roiling boil.

As a bead of sweat trickled down my temple, I gingerly lifted the spoon. I blew on the broth, watching the steam curl away from me. Have I mentioned how hot it was? I sipped, burning my tongue just a little, and the taste reminded me of my mother's cooking, for when I was a child and sick: earthy and soothing. I added a good helping of salt, bringing out the flavors of the ginseng and garlic. Then, suddenly overeager, I tore into the chicken with my hands, quickly dropping the scalding drumstick. I used my chopsticks instead and slipped the meat off the bone.

Sweat lined my forehead as I continued to eat, alternating between broth and meat. The Korean chicken, although smaller, tasted gamier than its American counterpart. Somewhere in the middle of my meal, the heat finally broke.

"It's refreshing, isn't it?" asked the auntie. I smiled and nodded as a cool breeze wafted over my face.