Survivable plane crashes are not miracles

Luck is more likely at work. Plus: It's time to put the silly Steven Slater story behind us 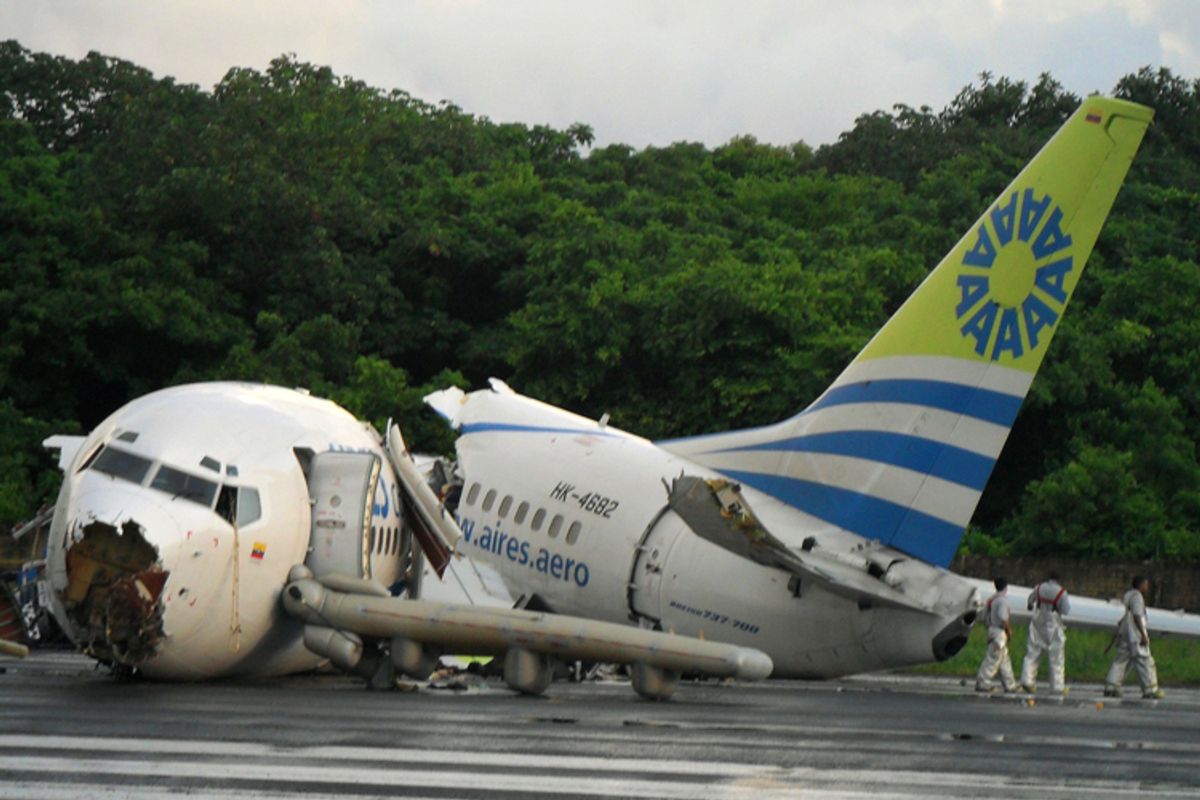 Navy officers walk near the wreckage of a Colombian passenger plane that crashed in the Caribbean resort island of San Andres on Monday.
--

One person was killed as the plane skidded down the runway and broke into three large pieces while landing in stormy weather. One hundred and thirty passengers and crew escaped.

Predictably, that all but one person survived is being called a "miracle." We hear this word virtually every time there's a survivable accident. In fact most airplane crashes have survivors. Doest that mean most crashes are miraculous?

The 737 landed hard and broke apart, but did not catch fire. Luck, not some unseen guiding hand, was more likely at work.

Anyway, in this most recent case, it is far too early to know what happened, but a few things jump out at me.

First off, you can probably discount the various reports that lightning may have contributed to the accident.

To review from an earlier column, while the idea of a bolt of lightning striking a plane seems dramatic, it happens a lot more frequently than you might expect. An individual jetliner will be struck about once every two years, on average. Planes are designed accordingly: The energy does not travel through the cabin, electrocuting the passengers and frying cockpit instruments; it is discharged overboard through the plane's aluminum skin, which is an excellent electrical conductor, nine times in 10 leaving little or no evidence. I have personally experienced a handful of strikes, the worst of which left a mostly superficial entry wound near the airplane's nose.

Once in a while there's damage or upset, most commonly to a plane's electrical systems. In 1963 lightning caused a wing explosion aboard a Pan Am 707 over Maryland. Afterward, the FAA decided to enforce several protective measures, including fuel tank modifications and the installation of discharge wicks aboard all aircraft. That was almost 50 years ago and I know of no other lightning-caused disasters to date.

What did go wrong on San Andres island? If I were an investigator, among the things I'd be looking into is the possibility of wind shear -- specifically a microburst.

This too is something we've covered before.

One of those buzzwords that scare the crap out of people, wind shear is a sudden change in the direction and/or velocity of the wind. Although garden-variety shears are extremely common and rarely if ever harmful, encountering a powerful shear during takeoff or landing, when airplanes operate very close to their minimum allowable speeds, can be dangerous. Remember that a plane's airspeed takes into account any existing headwind. If that velocity suddenly disappears or shifts to another direction, those knots are lost. It can happen vertically, horizontally or both, as in the case of a microburst preceding a thunderstorm. Microbursts are intense, localized, downward-flowing columns of cold air spawned by storm fronts. As the air mass descends, it disperses outward in different directions.

Wind shear and microbursts got a lot of press in the 1970s and 1980s when they were still misunderstood phenomena. The crash of Eastern Flight 66 in New York in 1975 is considered the watershed accident after which experts began to study them more carefully. Since then, conditions that propagate dangerous shear have become relatively easy to forecast and avoid. Major airports are now equipped with detection systems, as are planes. Pilots are trained in escape maneuvers, and can recognize which weather conditions might be hazardous for takeoff or landing. In the United States, the last headline crash attributed to wind shear was in Dallas in 1985.

Which isn't to say it can't still happen -- though whether this was the case in Colombia we don't know, and any number of other things also are possible.

We can all be thankful for the lack of carnage, but another fortunate aspect to the Aires crash is that it takes our attention away from Steven Slater, the JetBlue defector and future celebrity game show guest.

I, for one, am a little bit tired of him.

To wrap things up, though, it's interesting to note how the Slater story has developed a second narrative -- one that portrays him less as a working-class hero and more as a confrontational crank who was working through serious personal issues and family traumas. Several passengers have come forward claiming Slater was rude and acting erratically, not only aboard Flight 1052, but on previous flights as well.

Look, let's give the guy a break. He does not deserve (and won't get) any jail time. He needs some breathing room.

Or maybe we need the breathing room. That is, we need to put this silly story behind us. It should never have been the sensation it was in the first place. It's depressing, in a way -- this idea of America trying to see itself, trying to find and measure itself, through the hysterical actions of a troubled flight attendant.

And one last point, some confusion over Slater's résumé. "I've been in this business 20 years and that's it," Slater allegedly announced over the public address system of the ERJ-190 as he made his way toward the emergency door. Later, in an interview with the New York Times, he spoke again of his 20 years in the business. This number has been widely referenced elsewhere in the media. Some sources have erroneously reported the number as "28 years."

I'm a little confused because, as these very same outlets report, seemingly not afraid of openly contradicting themselves, Slater is only 38 years old. Cabin crew need to be at least 21 -- not 18, and certainly not 10. According to Wikipedia, Slater began his cabin crew career in 1994, with the now-defunct Business Express Airlines, the former Delta Connection carrier. That's 16 years.

Either way it's not a big deal, but I find it curious that despite all of the attention devoted to the Slater saga, nobody in the media, to the best of my knowledge, has brought up this discrepancy.

I suppose Slater could have worked in another capacity -- ticket counter, reservations, etc. -- before becoming a flight attendant, but I have not been able to confirm this.

One thing for absolute certain is that Slater has not been employed, in any capacity, be it for 28, 20 or 16 years, at JetBlue.

JetBlue did not begin operations until February 2000.

That was about two years before the first installment of Ask the Pilot, by the way. Using the Slater Sliding Scale, one could say that I've been writing this column for 15 years!

However long it has been, it's too bad there isn't a way to copyright this pilot-answers-questions gig once and for all.

The reason for my concern is that USA Today is about to reintroduce its not-at-all-derivative "Ask the Captain" online column. It begins again on Monday, Aug. 16. This time the host is John Cox, a retired US Airways captain and former human factors specialist with the Air Line Pilots Association. (OK, admittedly the naming options for this sort of thing are limited.)

Some of you might remember that "the Nation's Newspaper" ran a previous FAQ column a few years back under the same title. The original host was a former United captain named Meryl Getline. Getline eventually gave up her gig, as did "Captain Steve," the fellow who pitched in at the Freakonomics blog a few months back. Neither could compete against my singular blend of trenchant insight, eloquence, keen humor and shameless self-promotion. Either that or they found the traveling public's questions too insufferable to handle without heavy amounts of meditation and alcohol.

That leaves you and me, Cox.

Best of luck, but don't say I didn't warn you. You've got your work cut out, believe me. My advice is more or less the same advice I gave to Getline and Steve:

1. Never underestimate people's hatred and distrust of the airlines.

2. Never underestimate how much bad information is out there -- myths, wives' tales, conspiracy theories -- which the bulk of people heartily believe.

3. Realize that no matter how hard you work to tell the truth, a substantial number of people simply won't believe you. (See my efforts on cabin air, et al.)

(Incidentally, for all the criticism that people throw at USA Today -- "McNews," and such -- I don't find it a bad newspaper, and its aviation writer, Alan Levin, is one of the good guys who tries to get his stories right.)

A couple of weeks ago, when Cox was introducing himself to his new constituents, several readers posited questions in the letters forum. Many were exact dupes of questions I've covered in my own column, in some case multiple times, so I couldn't help myself. I dove in to answer a few.

A couple of days later I got a letter from the paper's deputy editor asking me to please not do that. Fair enough, I guess. Maybe it was the www.askthepilot.com tag that I included with each answer?

Ah, speaking of self-promotion, why aren't more of my devotees purchasing hats and T-shirts? (FYI, I'm just breaking even on these things, not trying to turn a profit. I need help spreading the Good Word, the Gospel of ATP.) And Steve Hartman, my Cult Affairs Coordinator over at Facebook, says that I need more "friends." He's hoping to hit 2,000. I don't know what happens at that point, but Steve seems to think it's important.

What are your thoughts, by the way, on expanding the Ask the Pilot merchandising options? Luggage tags, beer mugs, a Patrick Smith bobblehead, commemorative golf balls? What's your fancy?

Golf balls, that's funny. Funny because I have never in my life swung a golf club.

That's correct. And in the interest of unsolicited disclosure, I have never gone scuba diving or skiing either.

My lack of experience in these fields sometimes makes me insecure, seeing how popular they are among my colleagues.

Little do they know I don't own a car, either. In fact, I'd be willing to bet that I am the only airline pilot in the United States of America who doesn't drive.

If there are more of you out there, please be in touch. We need to start a support group or something.