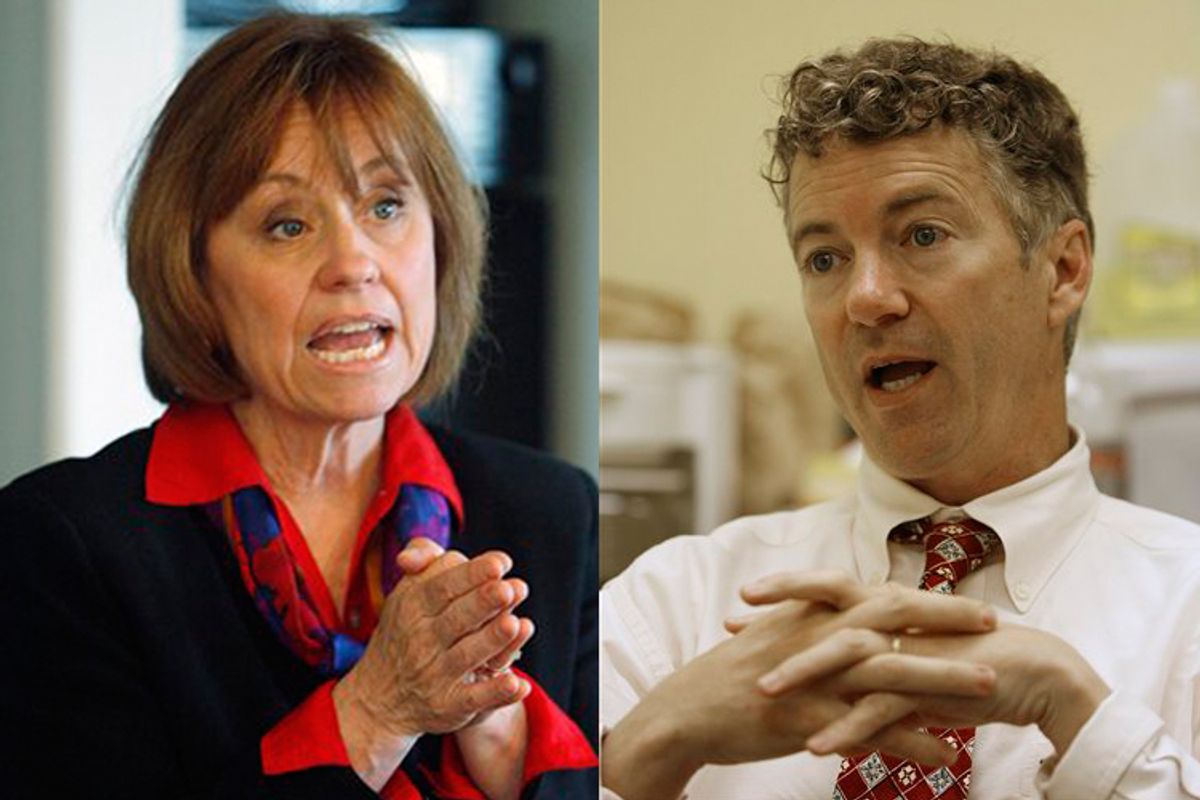 It is very reasonable to point out, as Slate's David Weigel did the other day, that some of the fringier Senate candidates nominated by Republicans this year -- the candidates who Democrats hope will cost the GOP seats they'd otherwise claim -- could actually win in November. But the specific case he makes is flawed.

Weigel draws a parallel to 2006, when a handful of candidates backed by Rahm Emanuel's House Democratic Congressional Campaign Committee lost primaries to grass-roots favorites, prompting the national Democratic establishment (and, by extension, the national media) to lose enthusiasm for the races -- the equivalent, he suggests, of what we're now seeing on the Republican side. In particular, he cites the example of New Hampshire's Carol Shea-Porter, who upset the DCCC's favorite in a very low turnout September 2006 primary -- and then went on to win in November, even as the DCCC shunned her.

There are several problems with this analogy. First, Weigel is mainly dealing with House races, which are lower profile in nature than Senate races. A candidate like Shea-Porter may have been too liberal in the eyes of the D.C. establishment, but how many voters in New Hampshire's 1st District knew anything about her?

In the primary, she succeeded because of shockingly low turnout; it was possible for her to meet and motivate the party's grass-roots base and to upset Jim Craig, who'd never seemed that interested in running in the first place. In the fall, though, the electorate was dominated by more casual voters -- voters who were more strongly inclined than ever to affirm the Democratic ticket. 2006, don't forget, was the year that New Hampshire reelected its Democratic governor, John Lynch, with nearly 80 percent of the vote and flipped its Legislature to the Democrats for the first time since the Civil War.

Activists in both parties knew who Carol Shea-Porter was, but the campaign wasn't extensively covered on television news. To casual voters, she was just the name on the Democratic line -- which was just enough to lift her to victory. (Plus, the lack of DCCC financial support wasn't as big an issue as Weigel suggests. Since New Hampshire is so small, both congressional districts are served by the same television outlets [WMUR in Manchester and the Boston network affiliates], and those outlets were flooded with DCCC-funded ads for Paul Hodes (the Democrat running in the other district), which pressed the same generic theme [Change the course!] that Shea-Porter and every other Democrat in America was running on in '06.)

Now, contrast Shea-Porter's experience with, say, Sharron Angle's. Since winning the Nevada GOP primary in May, Angle has been the subject of extensive state and national press coverage, much of it focusing on her quirky views and efforts to evade media inquiries. She is fast becoming a character whom all Nevadans are familiar with -- and not for good reasons. This makes it harder for her to capitalize on the broad anti-Democratic/anti-Harry Reid sentiment that exists in the state. A bland, generic Senate candidate might be able to fly under the radar and corral the "anyone but Harry" voters, which would certainly be enough to win in a year like this. But Angle is simply attracting too much negative attention. She has given Reid an opportunity to make the race as much a referendum on her as on him.

The same is true in Kentucky, where Rand Paul has emerged as a new political celebrity -- and a polarizing one at that. He's given Democrats, who have no business being in contention for an open Senate seat in Kentucky in 2010, a chance to deflect attention from Barack Obama and national Democrats and to make Paul himself the dominant issue of the campaign. Weigel is right that this may not work in the end; swing voters may end up shrugging off their concerns about Paul and voting for him anyway, simply because they're angrier with Obama and the Democrats in Washington. But Paul's candidacy has unquestionably given Democrats a better shot at winning in Kentucky than they otherwise would have.

In this sense, the apt parallel is not to the 2006 campaign, but to 1994 -- the last year in which Republicans enjoyed such a favorable national climate. Even still, they managed that year to blow one high-profile Senate race that they should easily have won, and it had everything to do with nominating an extreme candidate.

This was in Virginia, which was then a much redder state than it is today, and one whose electorate in '94 was in revolt against Bill Clinton and the national Democratic Party. On top of that, the incumbent Democrat seeking reelection in '94, Chuck Robb, was facing poisonous poll numbers (the kind with which Reid has been saddled all year), the result of a series of scandals involving his personal life and possible wiretapping of former Gov. Doug Wilder, a Robb foe. Ousting Robb should have been a cinch for the GOP. But the party's conservative-dominated state convention embraced Oliver North, nominating perhaps the only man in Virginia capable of losing to Robb in '94.

Sure enough, North's presence fundamentally altered the nature of the fall race. Had the campaign been a referendum on Robb and the Democrats, the GOP would have won with ease. But with North in the race, Robb was able to turn the tables on the Republicans and scratch out a 3-point victory. (Some Republicans still claim that it was the presence of an independent candidate, moderate Republican Marshall Coleman, that ultimately killed North, but this misses the point: Coleman's presence in the race -- and the willingness of so many GOP-friendly independents to embrace him -- was testament to how thoroughly unpalatable North was to swing voters. It's hard to imagine that they would have flocked to him without Coleman in the race.)

Simply put, the House campaigns that Weigel mentions never enjoyed the saturation coverage that Angle and Paul are now facing -- or that North dealt with in '94. It is that kind of media coverage -- highly critical, highly visible, penetrating the consciousness of casual voters -- that transforms candidates from mere names on ballots (capable of riding the national tide to victory) into the kinds of polarizing characters that can lose winnable elections.

So, yes, Paul and Angle can win this year. The national tide may prove so strong that even they can't be beat. But if that happens, it's probably a good idea to keep in mind the words of Braves manager Bobby Cox: Don't confuse favorable outcomes with good decisions.