Franklin returns, The Authority appears and we get more hints about Sookie's mysterious powers 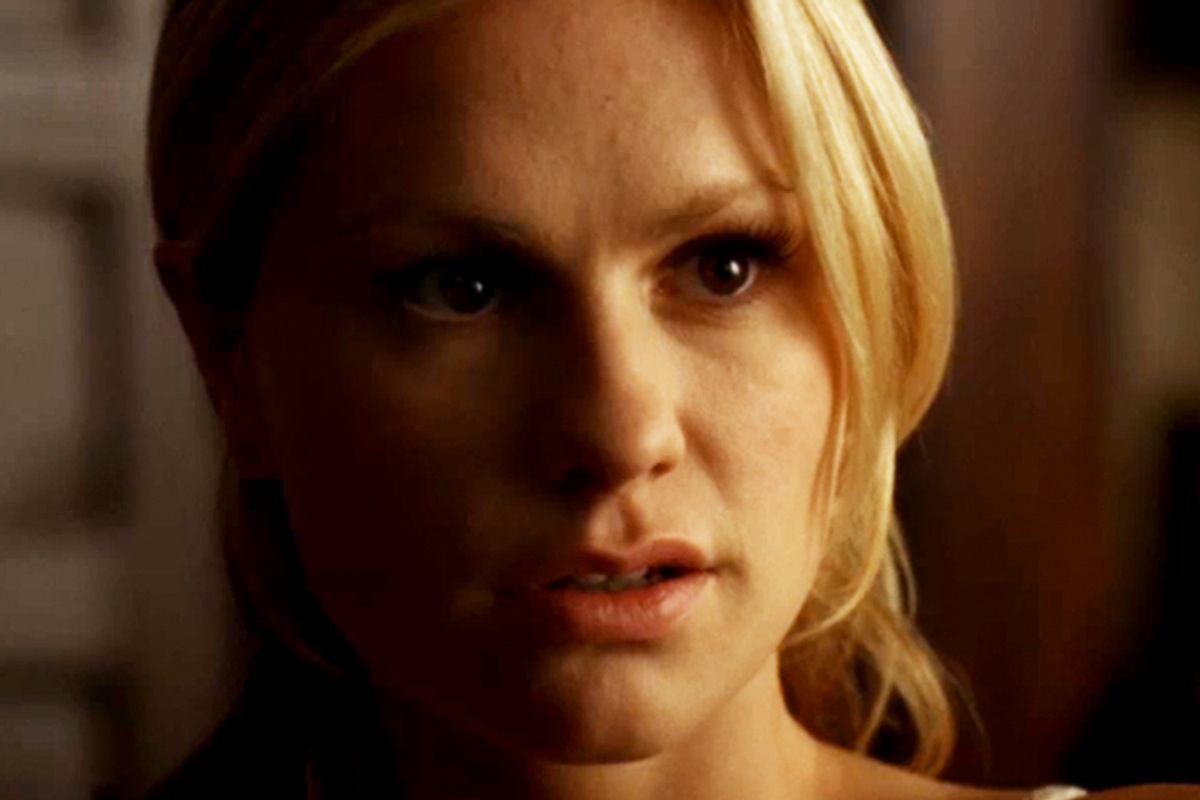 Does anyone remember a couple of episodes back when I jokingly guessed The Authority got its authority from somewhere in Maine? Turns out I have special recapping powers that I'm only now becoming aware of. Like Jessica, the baby vampire, however, and Sookie, the emerging whatever-she-is, my control over these skills is obviously a little wonky. Seems I  confused my Portlands, and The Authority isn't seeking absolute power so much as entrenched constitutional rights in Oregon, a state that might be the first to ratify the VRA (Vampire Rights Amendment).

The Authority is a council of shadowy Star Trek like figures who Skype from a giant boardroom-sized screen and have their own militaristic police force, the V-Feds. According to Nan Flanagan, who waltzes into Fangtasia all Matrix-ish, they're  not impressed with "fucking Louisiana" and its distracting V-dealing gang wars.

Nan puts Eric and Pam in "lock down" for the duration of the episode. Maker and child have the kind of poignant scene that you might not expect from a millenium-old Viking prince and a century old lipstick lesbian. Eric tells Pam it's time for her to become a Maker so she will have someone if he's not around. (Tommy! Pick Tommy, please. So much potential with shape shifting vampires, and he needs his ass kicked.) In the end, The Authority sides with Eric against Russell, but refuse to help him out in any practical way, since they don't want to be tied to this "political tar baby."

Nan calls Eric a "whiny little bitch" and rightfully so. One minute he's all,"I didn't tell you about the three millennia of vampire-financed werewolves screwing with human civilization during times of crisis because this is between me and Russell." And the next minutes he's all, "I can't beat him on my own. I'm only a thousand years old!"

Good luck Eric. What did you think was going to happen when Russell found the remains of Talbot sticking to the floor of their palace like a batch of curdled Salt Water Taffy? Whatever happens, I'm going to miss those crazy heirlooms, such as the crystal dessert urn in which Russell has decided to carry Talbot around. From what I can tell, the campy early summer hijinx of vampire kingdoms, same sex partnership palaces, and needy psychopath vampire P.I.s are mostly over. It's time to give the residents of Bon Temps back a little bit of their soul and acknowledge that disturbing sexual violence isn't always just fun and games.

Tara makes the decision to seek help from a rape survivors group, where Holly is apparently a member of Sponsors Without Boundaries, introducing Tara to the group pretty much as "that girl I've been telling you all about, who works with me at Merlotte's." Still, Tara seems deeply impressed with a speech of Holly's that doesn't quite hold together, for me at least. Holly was once viciously raped by a co-worker, but every year "that little part of her" that used to trust  is getting "a little bit stronger." Too bad about that other part of her that looks for work at places where waitresses get murdered.

At least Tara is inspired to tell Franklin, when he shows up as we all knew he would, that she doesn't love him, and also he's a psychopath. Fortunately, Jason arrives in his official role as killer of Tara's boyfriends. A couple of wooden bullets, and Franklin dies "the true death" like the first to go in a vampire version of paint ball. It's a safe guess we'll be seeing more of those gunshot splats. It's hard to imagine the V-Feds are carrying AK 47s filled with normal bullets.

Let's hope Tara's around to protect Jason when he finally realizes that Crystal is nothing but a whole heap of scary Deliverance level trouble. Sam also could be helpful. Judging from the way he beats the bile out of Crystal's dad, he's working out unresolved survivor issues too. This  may explain the doomed mentorship he's chosen with the obviously sociopathic beyond repair Tommy.

Fortunately not everyone seems to be in a doomed relationship. Things are splendid between Jesus and Lafayette. Jesus is so cute as "the sick fuck who ordered a vege burger with bacon on it." And Ruby, Lafayette's schizophrenic, right-wing mother is impressed enough to ponder the possibility that "maybe God loves faggots." Ruby provides one of the few comic lines in this mostly serious episode. Along with Andy who vows to bring Blackwater in to bust up Hot Spot. Right Andy, because you're just like Dick Cheney in Iraq. And isn't Jason just like W?

Finally, there's Bill and Sookie who manage to make soaping each other down in each other's blood seem both tender and sexy. If Stephen Moyers and Anna Paquin don't get nominated for  Emmys, here's hoping they at least make the cut at the AVN awards for a couple of scenes which, when you remember they're actually engaged, are pretty much the next best thing to televised sex tapes.

Later, while Sookie is meeting with Hadley, and learning that Hadley's son is a mind reader too, Bill pays a visit to Sookie's friend, Claudine, in the sunny place that is now obviously not a dream. Suddenly I'm over Eric and solidly on team Bill. It all makes sense now. Bill needs that safe sun from Sookie's whatever-she-is world. And that world, if it ever wants to be more than just a high end tampon ad, needs a little more of the grungy darkness of Bill's world. They have a hilarious (to me at least) conversation over who's giving Sookie more "protection." In my opinion, it's a draw. Claudine has the blue taser light and more feminine freshness. But Bill has the ninja moves and doesn't actually seem to mind a little blood.

In the meantime, however, Russell is mad as hell and he's not going to take it anymore. As the episode comes to the close, Nan takes Russell's role as the limo riding, bloodsucking creature of the night. And Russell takes Nan's usual spot on the television in the background. Instead of giving vampires a voice in civilized debate, however, Russell impales the network anchorman, and then tells it like it is in a misanthropic rant that could make Peter Finch sit up in his grave.

Vampires don't  want equality. They want to rule! And apparently, given the tone of Russell's speech, and the state they've chosen to campaign in, they also want an episode guest-written by Chuck Palahniuk.