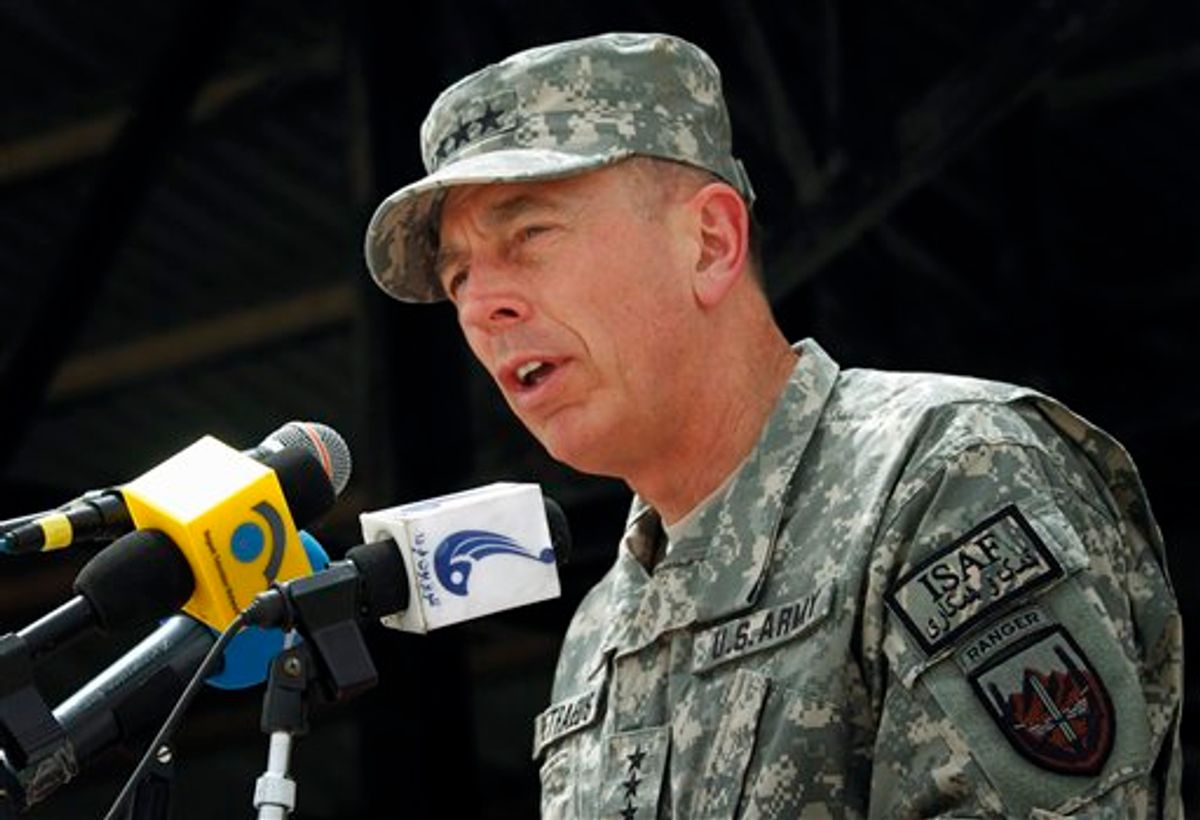 FILE - In this July 15, 2010, file photo U.S. Gen. David Petraeus, commander of the NATO and U.S. forces in Afghanistan, speaks during an oath taking ceremony of recruited Afghan soldiers at the Ghazi Military Training Center in Kabul, Afghanistan. In comments from Kabul broadcast Sunday, Aug. 15, 2010, Petraeus said progress in Afghanistan only began this spring and needs time to take root. "We're here so that Afghanistan does not once again become a sanctuary for transnational extremists the way it was when al-Qaida planned the 9/11 attacks in the Kandahar area," he said. (AP Photo/Musadeq Sadeq, File) (AP)
--

Progress in the Afghanistan war is occurring gradually, despite rising U.S. casualties, Army Gen. David Petraeus says in comments aimed at shoring up support among an increasingly skeptical American public.

Arguing for patience, Petraeus said that it was only in the last few weeks that the war plan had been fine-tuned and given the resources that it required. "For the first time," he said, "we will have what we have been working to put in place for the last year and a half."

Petraeus spoke on NBC's "Meet the Press" on Sunday and in interviews with The Washington Post and The New York Times. On the job as war commander for only a few weeks, he is trying to reassure Americans that the 9-year-old war is worth fighting, and to argue that President Barack Obama's redrawn strategy is only beginning to take root.

"It's a gradual effort. It's a deliberate effort," Petraeus said. "There's no hill to take and flag to plant and proclamation of victory. Rather, it's just hard work."

Petraeus took the job from cashiered Gen. Stanley McChrystal with the understanding that some U.S. forces will come home next summer, as Obama has promised.

On NBC, Petraeus did not appear to rule out that he might eventually tell Obama that a drawdown should be delayed. "The president and I sat down in the Oval Office, and he expressed very clearly that what he wants from me is my best professional military advice."

Petraeus, who's been credited with a successful war strategy in Iraq and who took charge of U.S. and NATO military operations in Afghanistan in July, described an "up and down process" of seizing Taliban-controlled territory and creating "small pockets of progress" that he hoped will expand.

The goal, he said, is to keep al-Qaida and other extremist groups at bay while the Afghan government has a chance to take control and earn the trust of the local population.

"We're here so that Afghanistan does not once again become a sanctuary for transnational extremists the way it was when al-Qaida planned the 9/11 attacks in the Kandahar area," Petraeus said from Kabul, the Afghan capital.

Petraeus and other military leaders have warned of more combat casualties as additional troops are sent to the fight. July was already the deadliest month for U.S. forces, when 66 troops were killed.

Last fall, Obama authorized 100,000 troops in Afghanistan -- triple the level from 2008. Obama's Democratic supporters have reluctantly swung behind the plan, but lawmakers are beginning to question whether Afghanistan can be won. Petraeus is expected to give an updated assessment to Congress in December.

Petraeus said Sunday that the war only recently has been given the right "inputs," or resources: more U.S. and Afghan troops to take over Taliban territory and more civilians to restore services to the population.

"There is understandable concern and, (in) some cases, frustration," Petraeus said. "Therefore we have got to really put our shoulders to the wheel and show during the course of this year that progress can be achieved."

Petraeus described Afghanistan as a tough and enduring fight that would require its "character and its size being scaled down over the years."

If the U.S. loses, there would likely be a bloody civil war followed by a takeover by extremists. If the U.S. succeeds and Afghanistan stabilizes, the country could become the region's new "Silk Road" with the potential to extract trillions of dollars worth of minerals, he said.

But the goal is not to turn Afghanistan into an industrialized democracy, he said. Even if the nation relies heavily on tribal councils for governance, the central government in Kabul could still run the nation effectively without influence from extremist groups such as al-Qaida.

He also said the Taliban leadership had detached itself from much of the fighting, occasionally sending messages via cell phones, but is not as engaged in the war as before.