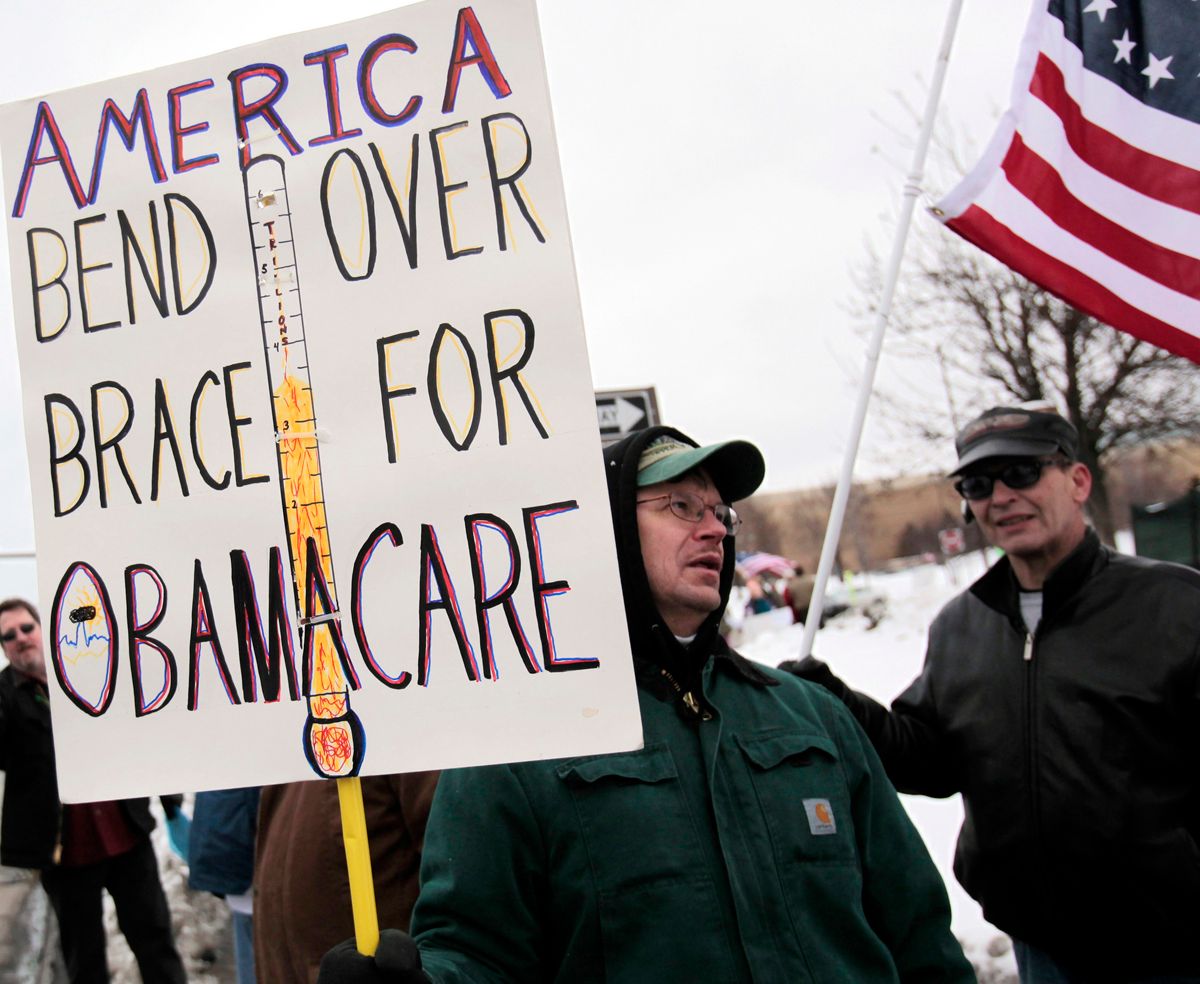 A Tea Party member carries a sign voicing his concern over "ObamaCare" during a rally marking the one-year anniversary of the movement in Troy, Michigan February 27, 2010. Some Tea Partiers say they can pinpoint the precise moment when they made it clear to the Republican Party they had no intention of being its lapdog. On a bright, brisk afternoon in mid-February, with snow still thick on the ground from storms that had battered Washington the week before, Republican National Committee Chairman Michael Steele met with more than 50 members of the Tea Party, the Twitter Age conservative movement that is reshaping the U.S. political landscape. Picture taken February 27, 2010. To match Special Report USA-POLITICS/TEAPARTY. REUTERS/Rebecca Cook (UNITED STATES - Tags: POLITICS CIVIL UNREST) (Â© Rebecca Cook / Reuters)
--

One of the most frustrating aspects of the current debate over the healthcare reform is the way that conservative bloggers and pundits keep trying to find evidence to justify Sarah Palin's false claims about a "death panel."

The latest example comes from bloggers Ann Althouse, Jim Hoft, and Doug Ross, who claim that the decision by the Center for Medicare and Medicaid Services to conduct a National Coverage Determination for the prostate cancer treatment Provenge is evidence of a "death panel" (Althouse headline: "Death panel"; Hoft: "HERE COME THE DEATH PANELS"; Ross: "sounds like a death panel to me").

This argument is absurd on a number of levels. First, in terms of the specific claims about Provenge, CMS hasn't denied coverage and experts say it's unlikely they will do so at the end of the year-long process (see also Media Matters). The entire claim is based on speculation.

More important, even if CMS had already decided to deny coverage, it would not justify Palin's statement. Here is the relevant passage again:

The Democrats promise that a government health care system will reduce the cost of health care, but as the economist Thomas Sowell has pointed out, government health care will not reduce the cost; it will simply refuse to pay the cost. And who will suffer the most when they ration care? The sick, the elderly, and the disabled, of course. The America I know and love is not one in which my parents or my baby with Down Syndrome will have to stand in front of Obama’s "death panel" so his bureaucrats can decide, based on a subjective judgment of their "level of productivity in society," whether they are worthy of health care. Such a system is downright evil.

Palin's language suggests that a "death panel" would determine whether individual patients receive care based on their "level of productivity in society." This was -- and remains -- false. Denying coverage at a system level for specific treatments or drugs is not equivalent to "decid[ing], based on a subjective judgment of their 'level of productivity in society,' whether [Palin's parents and baby with Down Syndrome] are worthy of health care" (see also Cato's Michael Tanner). Those who try to redefine "death panels" in this way are attempting to move the goalposts in the debate. It's the equivalent of pointing to buried Iraqi chemical shells from the 1980s as evidence for the Bush administration's claims about WMD.

Finally, defining "death panels" as rationing of any sort is totally nonsensical. By that standard, there are government and private "death panels" throughout the healthcare system already. It's true that Obama's proposal is likely to increase rationing, but so would every other proposal to control the unsustainable trajectory of future healthcare spending. Under Rep. Paul Ryan's Medicare voucher plan, for instance, CBO projects that "[b]eneficiaries would... be likely to purchase less comprehensive health plans or plans more heavily managed than traditional Medicare" (my emphasis). Unfortunately, hysteria over "death panels" is preventing a necessary debate over which approach would be most effective and fair.