Being an au pair for a dysfunctional French family was painful, but these bittersweet chops soothe the memory 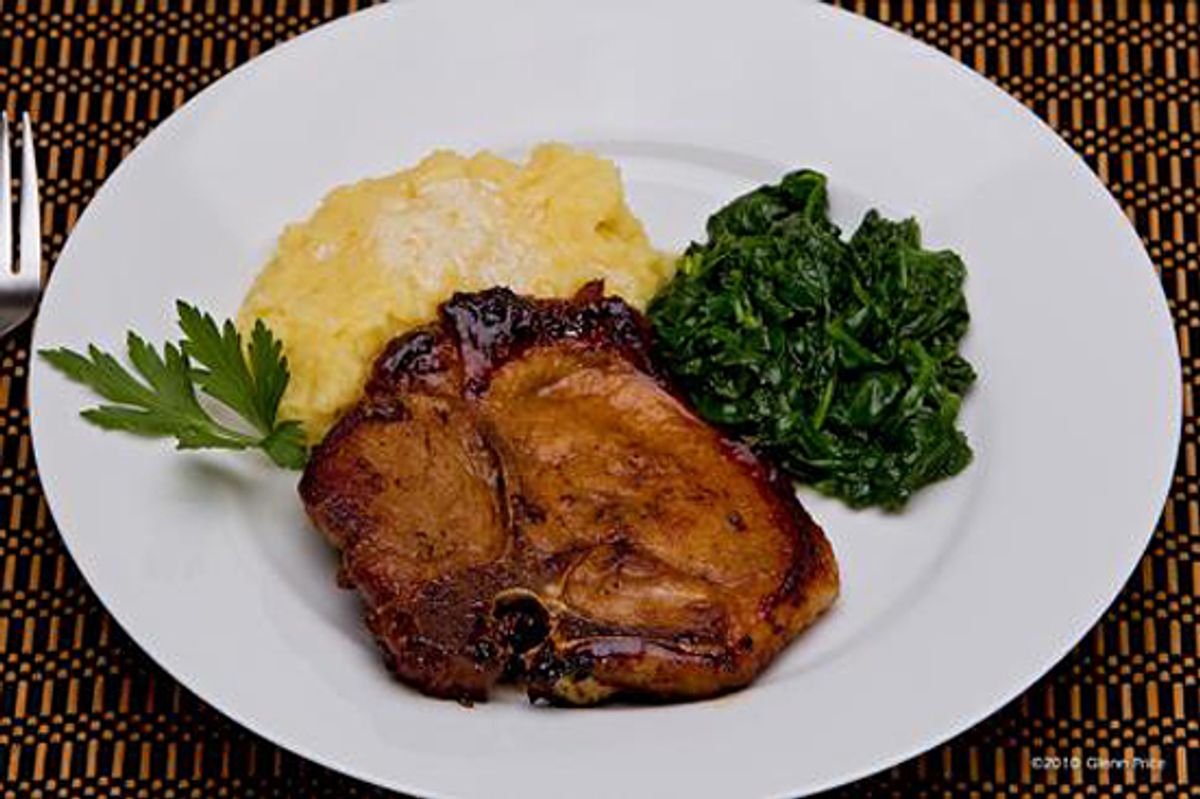 A version of this story first appeared on Felicia Lee's Open Salon blog.

I was a hardcore Francophile, and scoring a gig just out of college as an au pair for a family living near Lyon, France's second-largest city, seemed like a dream come true. In retrospect, there were clues the size of Humvees that something was very, very wrong with that family, but I was too starry-eyed to notice.

Maman, as she had informed me in an introductory letter written in creepily impeccable penmanship, did all the laundry herself. At first, I wondered why she bothered mentioning such a trivial detail. When I got to Lyon, I realized why: Maman didn't just do laundry. She did laundry the way Kobayashi does hot dogs. She ironed every single sock and piece of underwear her family wore, and engaged the housekeeper (who came in every day) in endless debate about the proper technique for folding fitted sheets so that they lay perfectly flat in storage.

Meanwhile, the children were screaming for her attention, literally and figuratively. Six-year-old Lisette demanded that all her drinks be fed to her in a baby bottle. Her twin brother, Remy, reverted to bed-wetting. Celine, their gentle and intelligent older sister, burst into tears at the tiniest provocation -- an undone ponytail, the wrong kind of cereal at breakfast. The first French expressions I learned in that household were "But he did it on purpose!" and "You're mean! I'm telling Mom!"

Oh yes, the twins had also just been diagnosed with dyslexia; could I also spend some time helping them with their lessons after school? After all, who could be better qualified to treat a pair of emotionally traumatized French children with a learning disability than a self-absorbed 22-year old party animal with French as a third language?

Back in the States, I was considered a master baby sitter. Kids liked me, and I liked them. Ditto their parents. But in Lyon, everything I needed to communicate to my charges seemed to require vocabulary I didn't have -- why hadn't I learned the word for "head lice" in any of my French literature classes?

My credibility with the kids was sinking fast, with no bottom in sight. And my popularity with Maman (who, family friends confided in whispers, was "very fragile") was also tanking.

"I'm not at all pleased at how you've done this," she barked one morning after I'd spent half an hour cleaning the twins' room. "Look at the shoes on the floor!" (Said shoes were lined up neatly along the edges of the beds.) "Nothing should ever be on the floor. I want the housekeeper to be able to just run the vacuum under the beds every day. And the beds! Look how loose those covers are! It's not sanitary. You need to change the sheets every day. And make sure the new ones are good and tight, with no wrinkles. Otherwise, how are the children supposed to sleep?"

There was no pleasing anyone in this family. So I retreated to the one place where I still felt competent: the kitchen. One of my responsibilities was making dinner for the children every night, and my dinners impressed even Maman. One day, I devised a cauliflower soufflé that puffed like a blimp in their cranky old gas oven. Another time, I made Vietnamese-style egg rolls. They turned out a bit wonky, but what child doesn't love deep-fried objects with a sweet dipping sauce? Friends and relatives drifted in and out and showed me interesting and simple French dishes, which I tweaked and experimented with in my daydreams, and one I carry with me to this day is their pork chops, unusual but dead simple: dredge your pork chops in sugar and pan-fry them. The sugar caramelizes and adds a lovely burnished color and bittersweet flavor to the meat. I think I learned this preparation from the children's eminently sensible paternal grandmother, but I can't be sure. All I know is that it's the only thing that family did regularly that was simple, agreeable and actually worked the way it was supposed to.

But with my head in the kitchen and Maman's who knows where, now there were two women in the house passionately devoted in some aspect of household maintenance while studiously avoiding the very people we were doing all this for.

This was an untenable situation and we all knew it. We agreed that I'd leave at the end of the month. But one Sunday afternoon soon thereafter -- Sundays being my day off -- I came back from an errand to find that the children had dragged the mattresses off their beds and down two flights of stairs to build a fort in the front entryway. Of course, I was in charge of tidying the children's rooms because Maman and Papa both felt the children were too young to make their own beds -- but they were quite capable of pulling stunts like this almost every freaking day.

It's Sunday, I told myself. I'll deal with this later. I stepped around the mattresses and went up to my room in the attic.

A few minutes later, I heard hysterical screaming downstairs. Not the usual parental yelling like my mom used to do. It was a weird, primal and manic wail, like the cry of a wounded animal on meth, and somewhere in there my name was being repeated over and over.

I heard footsteps on the stairs leading up to my room, and Papa was at the door, looking panicked and apologetic.

"You need to leave for Paris tonight. I've already paid for your ticket."

He looked over his shoulder. "She's very fragile right now. And you really should have brought those mattresses back upstairs."

I left gladly. And I brought their pork chop secret with me.

Note: The caramelized sugar has an annoying tendency to stick to the cooking pan. If this happens, fill the pan with about an inch of water and allow it to simmer gently while you eat your pork chops. By time you're done with your meal, the sugar will have dissolved.