Iran was not Jimmy Carter's fault 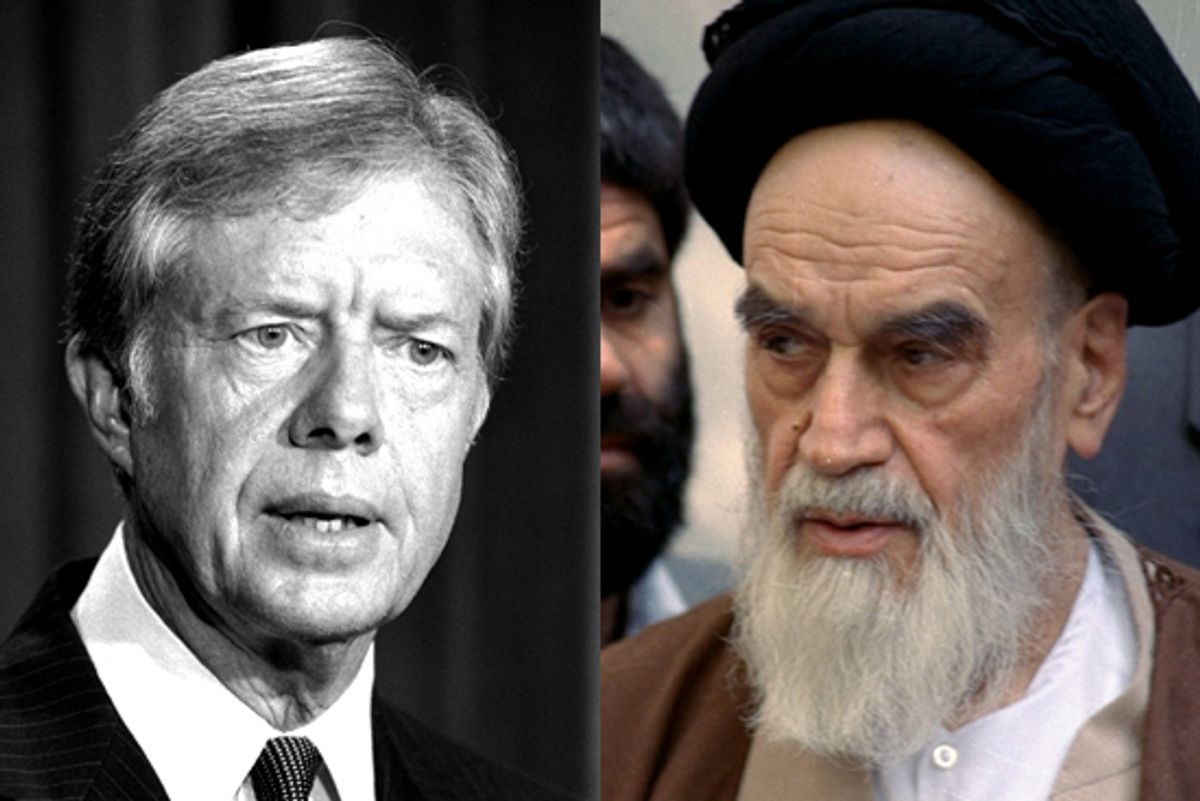 For a president regarded by many Americans as essentially ineffectual, Jimmy Carter still stirs up plenty of passion. My post yesterday pondering why right-wing bloggers rank him as the worst American of all time proved to be a hit with readers. And enough conservative Carter-haters have chimed in that I think it's worth taking a closer look at one key point: Carter's supposed responsibility for the Iran debacle.

"He is personally responsible for this mad regime in Iran."

The general line of argument seems to be as follows: Carter should have responded to the hostage crisis by nuking Iran, or otherwise initiating military action that would have prevented the establishment of a fundamentalist Islamic regime. But he didn't, which emboldened the forces of revolutionary jihad. The subtext: If Carter had taken a stronger line then (perhaps even before the hostage crisis, by providing military to support to the embattled Shah), maybe we wouldn't be facing such a mess now in Iraq and Afghanistan.

It is of course impossible to know what would have happened if Carter had invaded Iran and restored the Shah to power. Our recent track record in invading Islamic nations does not build confidence in the efficacy of such methods in solving long-term problems. Certainly, invading Iraq and Afghanistan hasn't improved our standing with Muslims. It's entirely possible that an invasion in the late 1970s could have hastened the emergence of al-Qaida-style terrorism. Maybe we'd be even worse of now.

But that's all speculation. The real problem with such an analysis is that blaming Carter for the success of the Iranian revolution completely misses the historical point -- which is that U.S. strategic interests, primarily tied to oil, generated profound antagonism in Iran decades before Ayatollah Khomeini's rise to power. If we want to blame someone for this "mad regime" why not Dwight Eisenhower, who was president in 1953 when a U.S-British backed coup overthrew the democratically elected government of Iranian Prime Minister Mohammad Mosaddegh?

Mossadegh's sin? Attempting to nationalize the British-owned Anglo-Iranian oil company, itself a direct offshoot of Western imperialism and the global race to exploit MidEastern oil resources.

The aftermath of that coup poisoned any chance that the majority of the Iranian population would ever view the United States in a positive light.

As one of the hostage takers told an outraged American embassy staffer: "You have no right to complain, because you took our whole country hostage in 1953."

The crisis in Iran that destroyed Carter's presidency was rooted in American and British actions in the MidEast dating back many decades. It strains our understanding of objective reality to call it his fault. In fact, it was Carter, as I wrote yesterday, who pointed his finger at the real villain -- American addiction to foreign oil.

Upon further reflection, it may be that Carter's real downfall was that he told Americans that if they wanted to wean themselves from dependence on foreign oil, they needed to change their ways, and we just didn't want to hear it. So we elected someone who told us we could have it all. You won't find a more eloquent articulation of this fundamental difference between Jimmy Carter and Ronald Reagan than in this snippet of an interview with Andrew Bacevich conducted by Bill Moyers.