Deval Patrick: Obama's canary in the coal mine?

If the Massachusetts governor loses this fall, will it be an omen for the president in 2012? 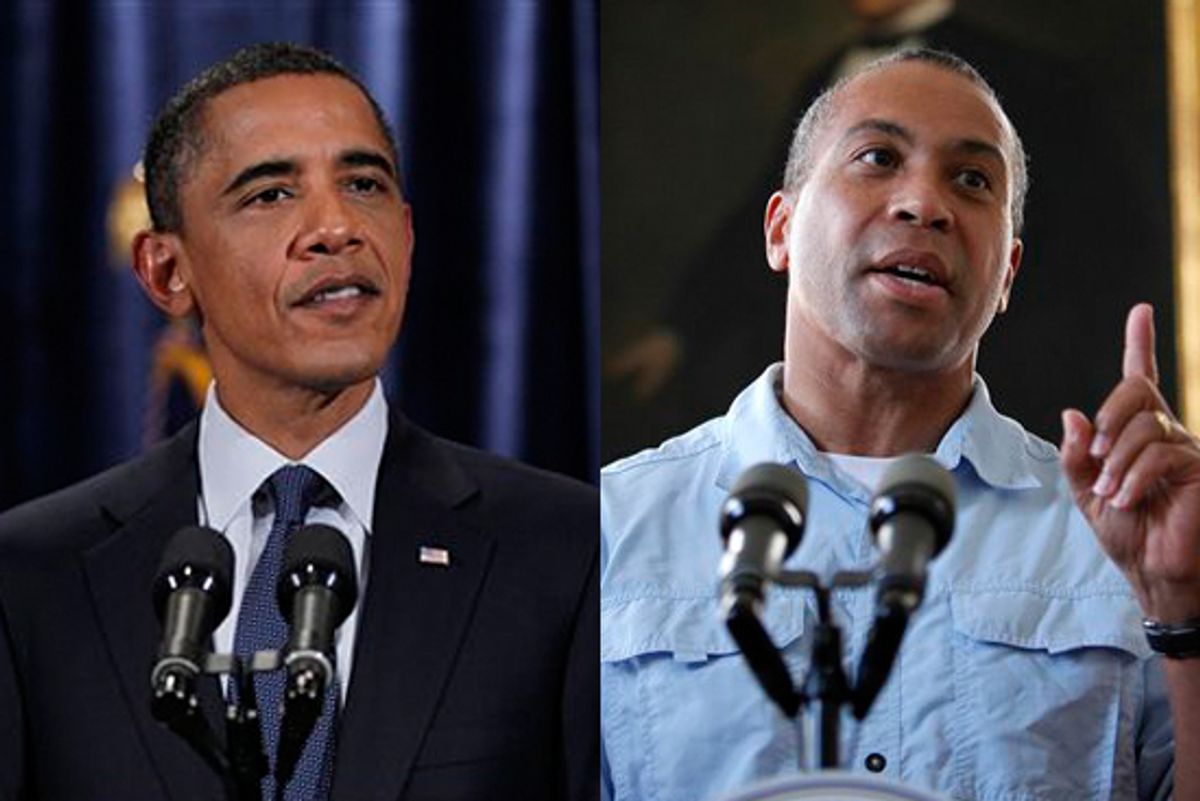 It's understandable why the Washington Post would write that Deval Patrick's reelection campaign this fall is  "a test case" for Barack Obama's in 2012.

After all, the two men attained sudden national prominence at roughly the same time a few years ago, each sounding the same themes of hope, change and unity and each activating large grass-roots armies. Obama was only the third African-American to win a Senate seat when he was elected in 2004, while Patrick in 2006 became only the second African-American in history to win a governorship. And the political trajectory of Obama's first term as president (at least so far) matches up with Patrick's: enormous expectations and high early approval ratings that quickly gave way to popular discontent and middling poll numbers.

Patrick, of course, is two years farther along than Obama, which means he's facing the voters this fall. Hence, the "test case" theme that you can expect to hear a lot about this fall.  As the Post noted today, "Many of the top strategists in Obama's political circle are helping to orchestrate Patrick's reelection campaign, and they are looking to his contest for clues to what might work for the president in 2012." Or, as Democratic strategist Mary Ann Marsh put it to Politico a few months back, if Patrick loses, "many people would say, 'This is the way to try to beat Barack Obama in 2012.'"

There's a problem with this, though: Patrick is running in a midterm election year in which the political climate -- thanks in no small part to the economy -- is poisoned against his party. His example will only really be telling if a similar climate prevails in '12.

This doesn't mean that there aren't plenty of non-national factors that have contributed to Patrick's predicament. He's shot himself in the foot several times. And governors are simply more liberated from national partisan tides than, say, senators. During the Gingrich/Bush era in Washington (1995-2009) voters in Massachusetts were supremely hostile to GOP candidates for federal office. In the first election after the '94 GOP revolution, the state's two Republican congressmen -- Peter Blute and Peter Torkildsen -- were voted out, and the Bay State hasn't sent a Republican to the House since then. But in that same period, the state elected two Republican governors, Argeo "Paul" Cellucci and Mitt Romney. In other words, Patrick won't just be a victim of the national climate if he loses in November.

Still, the national climate, particularly when it's slanted so strongly against one party, does loom large in gubernatorial races. It's no coincidence, for instance, that Romney's 2002 win came in a Republican year -- one that saw GOP governors elected in blue states like Rhode Island, Connecticut, Maryland and Hawaii. There were individual factors in all of those races, yes, but the national mood was key to making swing voters in those states receptive to the GOP candidates -- and putting them over the top. Similarly, it's no coincidence that the record-shattering 71 percent that Republican William Weld posted in his 1994 gubernatorial reelection came in the year of the GOP revolution. Weld would have won in any year, yes, but not necessarily by that margin. With swing voters, even in blue states like Massachusetts, far more receptive to voting for Republican candidates than they've been in a long time this year, the national climate could swing numerous close gubernatorial contests -- like Massachusetts' -- to the GOP.

But the idea that that means much for '12 is pretty hard to swallow. It's worth remembering that 15 states that elected Republican governors in 1994 ended up voting for Bill Clinton in 1996. If Patrick loses a close race this fall, it will be possible to connect the outcome to voters' frustration with Obama and the Democrats, which is driven by the economy.  But all that will tell us about '12 is what we've known all along: that if the economy is still weak then, Obama will be in trouble.