Note to media: Time to retire the M-word

Why are we so quick to call it a miracle when people survive crashes? What about the crew's skill? 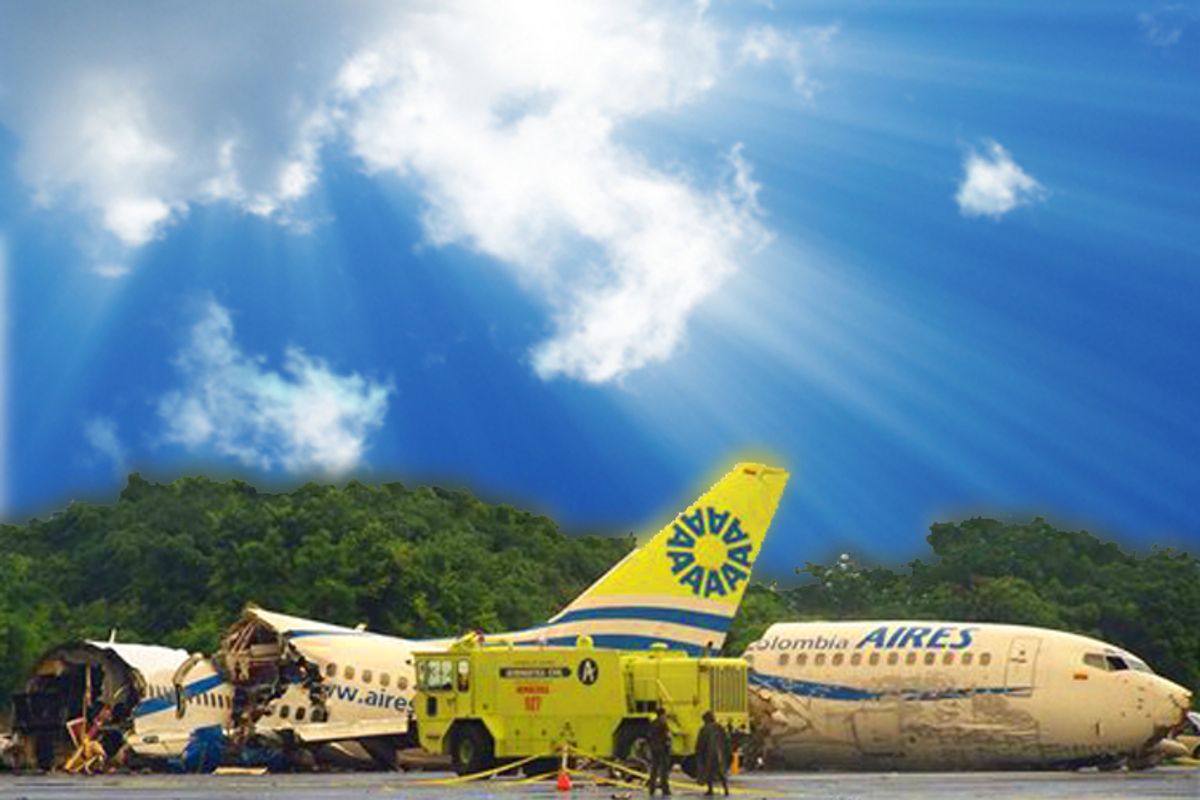 A "miracle." That was the operative term, at least as the media saw it, after Monday's crash of a 737 on the Colombian resort island of San Andres. Only one person was killed after the jetliner skidded and broke apart while landing in stormy weather. One hundred and thirty others survived.

We witnessed an earlier miracle, or so we were told, back in May, when a 10-year-old boy was the sole survivor of an Afriqiyah Airways A330 that crashed in Tripoli, Libya.

In 2009, a young girl became the lone passenger to escape a Yemenia Airways crash in the Indian Ocean. Miraculous, yet again.

Shortly before that, of course, we had Captain Sully and his "Miracle on the Hudson."

Shall we keep going? Five years ago this month, an Air France A340 overran a runway in Toronto. Similar to Monday's Aires mishap, catastrophe was narrowly averted following a botched landing in stormy weather. The jet went careening off the end of the runway and caught fire -- but not before every one of its 309 occupants made it out alive. On CNN, host Aaron Brown gifted us with perhaps the gaudiest playing of the miracle card to date. In one broadcast, he repeated the noun at least three times in a groaning whisper of incredulity -- "a miracle; a miracle; a miracle" -- infusing the word with a spiritual oomph. Brown's next guest may as well have been a Catholic priest. The piece had everything except heavenly harp music and a choir of angels.

And so on. Actually this sort of thing goes way, way back. When a Northwest Airlines DC-9 crashed on takeoff in Detroit in 1987, the one survivor was a 4-year-old girl. A miracle, naturally -- though in the pre-Internet era this invocation was less permeating and therefore more tolerable.

As I wrote the other day, for one to escape alive from an airplane accident is hardly surprising or unprecedented. Statistically, most crashes have survivors. This includes some of history's blackest disasters. To choose just two: Sixty-one people survived the Tenerife collision in 1977, and four survived the horrific JAL crash outside Tokyo in 1985 -- history's worst and second-worst disasters, respectively. The idea of a lone passenger making it out alive might seem particularly unlikely, as is the inverse, of everybody emerging unscathed, but as we see, it has happened several times. Luck, not some spiritual hand, is often the potent factor.

This same inverse is part of what makes the "miracle" phenomenon so peculiar and annoying. Is it miraculous that nobody was killed, or that everybody was killed save for a single soul? How many fatalities (or lack of them), exactly, separates the miraculous from run-of-the-mill happenstance? How about those survivors at Tenerife and in Japan? Somehow, numbers like "61" and "4" don't inspire such wondrous exaltation.

We're perhaps not being asked to take the term literally -- to believe that some supernatural force or deity has lent its power. But to those who see it that way, consider for a moment the odd benevolence of a deity who saves one at the expense of dozens, or hundreds of others. If those children who were pulled alive from the wreckage of Yemenia and Afriqiyah, et al., were indeed saved by miracles, what of those who perished? Can we chalk up their fate to some reverse miracle? Thus, the pretense of supernatural intervention is not, by itself, the main problem, but rather the way in which it is alleged, whereby one person's miracle is everybody else's curse.

This trend isn't going away, probably. At this point the M-word has become almost as pervasive in American media culture as the H-word (hero). In the US Airways Hudson incident, both of these terms were overplayed to a nauseating extreme.

Maybe this bothers me more than it should, but it seems indicative of, among other things, the devolved state of news reporting and a sort of continued infantilizing of the American consciousness. Aside from the contradictions already cited, it's exasperating that we are so inclined to credit the supernatural rather than credit, say, the design of the aircraft or skill or the crew. By the same token, much as we're thankful for this unseen hand when the outcome is something fortunate, we are eager to blame ourselves when it's not. It's tedious, hypocritical and offensive, not to mention insulting to the thousands of victims of air crashes who weren't so, well, lucky.