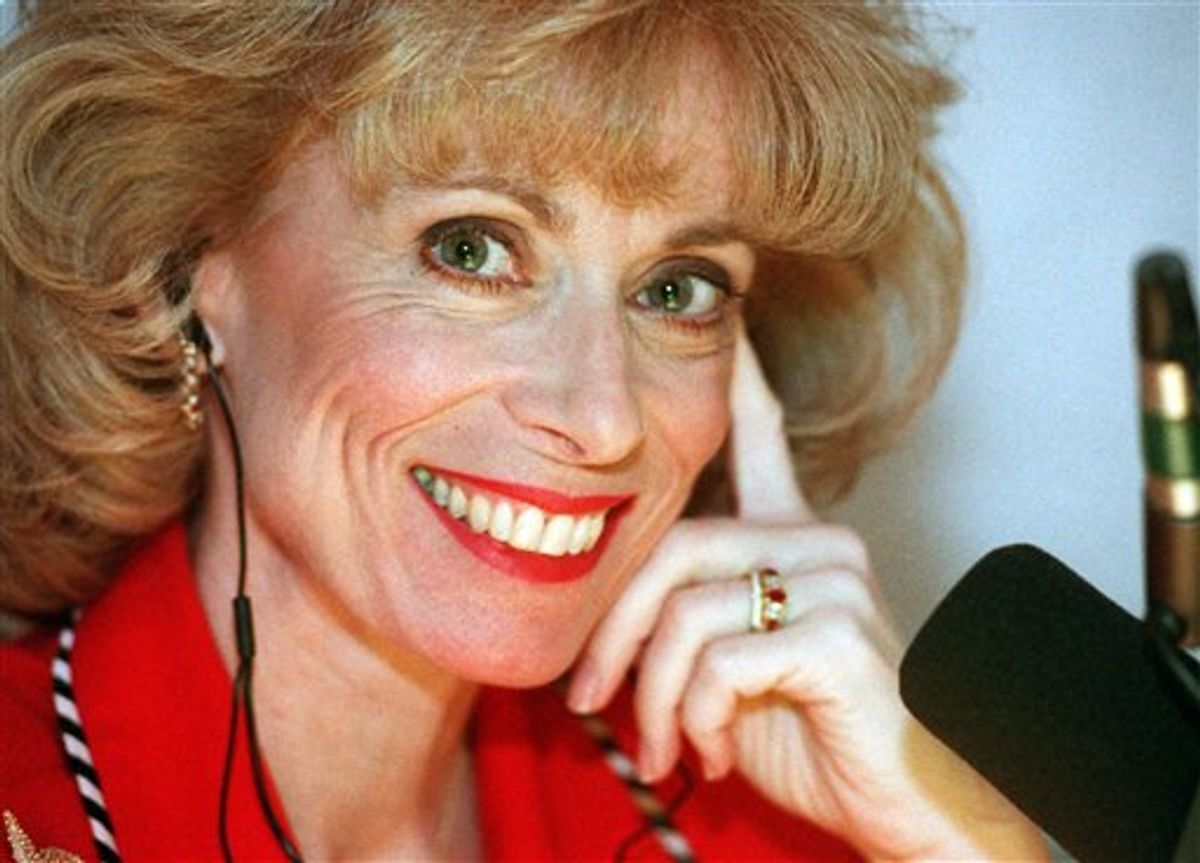 FILE - This Feb. 17, 1998 file photo shows Dr. Laura Schlessinger posing during her morning talk show in her Los Angeles studio. Schlessinger is apologizing for blurting a racial slur several times during her talk show, Aug. 10, 2010. Schlessinger wrote on her Web site that she was wrong to utter the N-word. (AP Photo/Susan Sterner, File) (AP)
--

So Dr. Laura Schlessinger told CNN's Larry King Tuesday night that she's giving up her radio show, after being criticized for an on-air flameout in which she abused a black caller and used the word "nigger" 11 times. "I want to regain my First Amendment rights," she told King. "I want to be able to say what’s on my mind and in my heart and what I think is helpful and useful without somebody getting angry, some special interest group deciding this is the time to silence a voice of dissent and attack affiliates, attack sponsors. I’m sort of done with that."

Like a lot of right-wingers lately (see the so-called "ground zero mosque" demonizers), Schlessinger shows a poor grasp of what the First Amendment does. It protects us from government abridging our speech rights; it doesn't protect us from other Americans deciding we're racially divisive idiots when we use the word "nigger" 11 times in a a single exchange with one caller. Schlessinger can study up on our Constitution while she's taking a break from radio, and if she decides to be a do-gooder (it can happen after a brush with infamy; look at Chuck Colson) she can hold Constitution study groups with the under-educated Republicans who want to shut down mosques and deny citizenship to children of illegal immigrants born in the U.S.

To me, the worst thing about listening to Schlessinger that day wasn't the use of the N-word (OK, I used the actual word above because I hate the euphemism – she didn't say the N-word, she said "nigger," with all its hateful sting -- but I can't use it anymore without feeling ill), but her hateful hectoring of a black woman with a white husband who was clearly looking for wisdom about how to handle the at best awkward, at worst racist situations she kept encountering with clueless white folks, including her husband's family. The caller stayed calm throughout, putting up with the N-word with only mild protest, continuing to engage, hoping for helpful advice from Schlessinger. God bless her, I hope she finds it somewhere.

I was feeling a tinge of sympathy as Schlessinger described herself as "contrite and remorseful" about the situation, and apologized again. Then she undermined her contrition with petulant whining about losing her First Amendment rights. It's shocking how right-wingers once attacked the alleged "victim mentality" of allegedly politically correct minorities, but now that victim mentality seems to be all they have. They're victims if they can't use the N-word freely, if they can't spew idiotic, divisive racial "philosophies," to use Schlessinger's words, if they have to suffer a Muslim community center anywhere near ground zero. Sadly, Schlessinger's not the worst of them: Rapacious Blackstone Group chairman Stephen Schwarzman compared himself to Poland, for God's sake, being invaded by Hitler, because President Obama wants to raise taxes on the top 1 percent of American earners. What crybabies they are. Watch Dr. Laura go from contrition to self-pitying right-wing defiance in a flash, here: